So, I intended to write a sort of opening night review of Post-Studio Tales (which opened Thursday April13 and will run until April 30). Instead, somehow, I only managed to get there some hours before and then the day after the opening event, experiencing an excited anticipatory energy on one day, and seeing a more subdued, recovery-mode atmosphere the next. In retrospect, this may have been a quite fitting way to first encounter Post-Studio Tales which functions as a continuous exhibition. All eighteen artists involved will actually live and work in the space open to the public. Self-described as a “residency-as-exhibition,” Post-Studio treats the idea of being in-residence as both a structural reality and a discursive concern. Visitors are invited to see the residency as it unfolds. Unlike other open-studio type scenarios, which so often seem to be in a state of constant readiness for visitors, I really got the sense that artists were treating this as a working residency – just one where an inordinate number of guests may just happen to pop by. 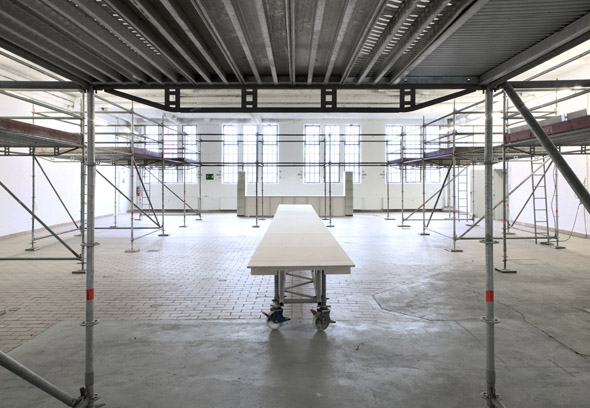 Post-Studio Tales is a residency for both the eighteen participating artists and the three curators who devised the project. It takes place within the auspices of the District Kunst- and Kulturförderung residency program that occupies buildings in the Malzfabrik – an historical malt-house in Schöneberg that has been converted into a cultural complex. Post-Studio takes place predominantly in two large industrial halls that are dominated by a series of scaffolding towers. The towers, as well as all other aspects of the exhibition architecture were designed by Berlin-based architecture collective Something Fantastic in response to requirements for a space that would house participants, give them space to work and be a framework for an on-going exhibition. Their solutions, both elegant and practical, are the show’s lynchpin.

One of the projects curators explained how at the start of the residency each artists name was drawn from a hat to determine in which order they would select a living space. While told they could sleep anywhere, so far all have opted for the upper level of the towers with many artists making the spaces directly below them their impromptu studios. Unsurprisingly, many artists have clustered together based on familiarity, and as these groupings have naturally fallen along cultural or national lines (Americans in one corner, Ukranians in another!) the result is something of an art-world UN (perhaps an apt analogy for international residencies and how they function?). 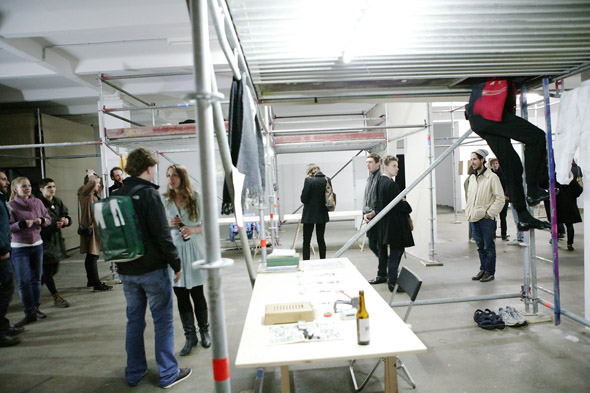 Visitors enter through the Säulenhalle, which, along with the scaffolding towers, and a display of images related to the exhibition architecture, contains a non-assuming reception area where one or more of the curators plan to greet incoming visitors and offer themselves up as facilitators come tour guides. The adjoining Lichthof contains a kitchen-come-makeshift-bar and a large communal table that runs down the centre of the room. On my second visit (the “day after” visit) several artists were milling around or using the table to work on laptops, while others hung out in their bedrooms or workspaces. Apparently I had just missed a communal lunch between a number of the artists, curators and some unsuspecting gallery goers. Collections of beer bottles and a certain stillness lent the place a hazy hung-over afternoon air. It was easy to feel a level of comfort in this space, like being in a friendly share-house, while also feeling equal parts trepidation – was I disturbing opportunities for well deserved afternoon naps? This is no indictment of the hospitality of the participants, pains were taken to make me, as a viewer, feel welcome in the space. But I think the show is also interesting precisely because there is also an uneasy voyeurism to it. 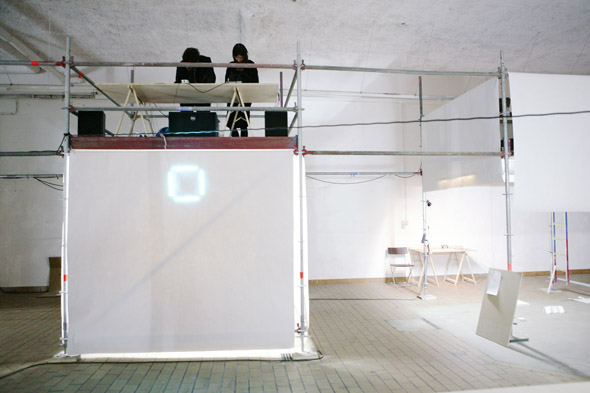 Certain oppositions, such as between openness and privacy, inclusion and exclusion, are already playing out. Each artist was allocated paper to construct their own living spaces. Hamburg-based artist, Burk Koller, has chosen to be completely out in the open (bar a small cardboard ‘tent’ that covers his feet while sleeping) and suggested he preferred to think of the arrangement as a temporary scenario, something akin to camping. His closest neighbour, a fellow artist from Hamburg, Tina Kämpe, has opted for nearly the exact opposite of this, choosing the heaviest material available (a thick cardboard), to erect walls. In many ways, the viewer faces the same dilemma on a much smaller scale. To what extent do we make ourselves at home? To what extent do we simply pass through? Assertions of privacy and autonomy in the space have both an othering effect, separating the artist from audience, and an inclusive effect, reassuring visitors that their voyeurism has limits. 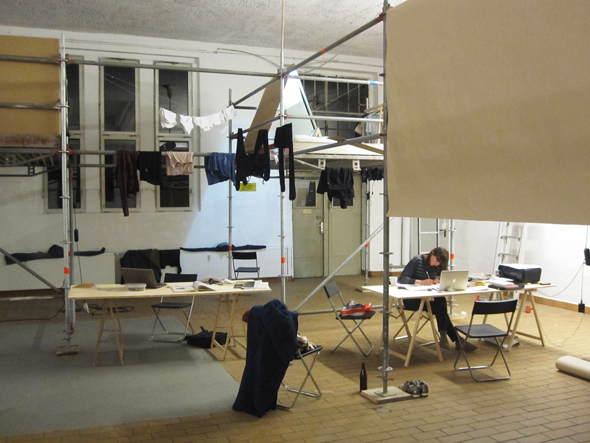 These conflicting impulses reminded me of Claire Doherty’s now famous criticism of Bourriaud’s Relational Aesthetics,“Antagonism and Relational Aesthetics” (2004). In it she draws a distinction between relational works of art that aim to create microtopias, soliciting a sense of community amongst participants, and relational works which she views as inherently antagonistic, producing relationships “marked by sensations of unease and discomfort rather than belonging,” (Doherty is candid in expressing her preference for the latter) (Doherty, 2004, p. 70).

Now a decade on from Relational Aesthetics, and there continues to be a lot of work that might be described as “relational”, while the kinds of open-studio, open-laboratory exhibition models developed by curators such as Hans Ulrich Obrist and Maria Lind in the 1990s remain popular. What I find telling about the structure of Post-Studio Tales is the extent to which it sits somewhere in between the distinction between open-ended, inter-active relational work and the kind of antagonistic interventions championed by Doherty. As though the binary between universally welcoming or antagonistically confronting an audience, no longer seems relevant (or even particularly useful). The result may be audience artist relationships that are less a novelty, more a complexity. 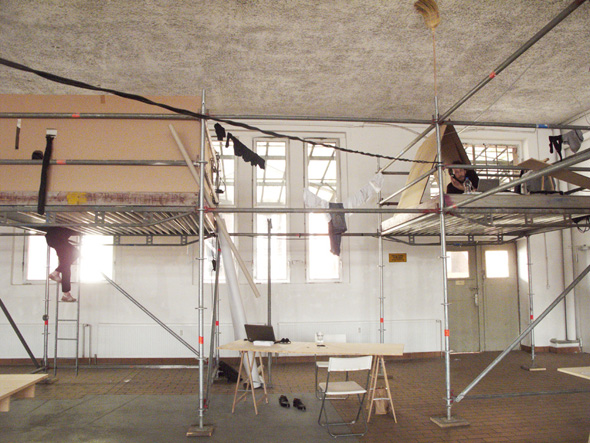 But perhaps the fundamental difference between now and then is that rather than creating specific scenarios for the viewer to interact with, artists today increasingly put themselves in unique or adverse scenarios and then mediate these experiences for the viewer. The proliferation of artist-in-residence programs across the globe, so many of which promise unique transformational experiences, are evidence of this. To experience Post-Studio Tales is to experience a fraction of what the artists themselves will undergo as they live and work there over the course of a month. And it is their journey, along with the curators, that is thought to be interesting to us as viewers. 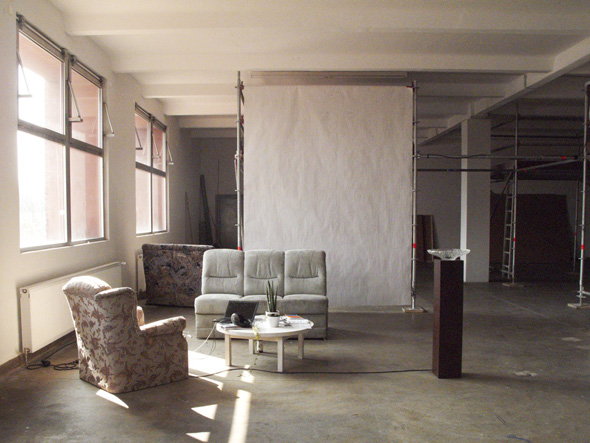 Take the artist Thomas Jeppe for instance, who plans to use the residency to work on paintings for a solo exhibition in Mexico in May this year (Curro Y Poncho in Guadalajara). These works will, to an extent, discursively address the condition of being an outsider (Jeppe is one of the only non-Mexican artists to be invited to exhibit). But these works as works-in-progress during the course of Post-Studio, detached from the context for which they are destined, will have a very different meaning. What is really on display are not art objects or even the artists’ physical selves, but the story of the residency, as it happens.