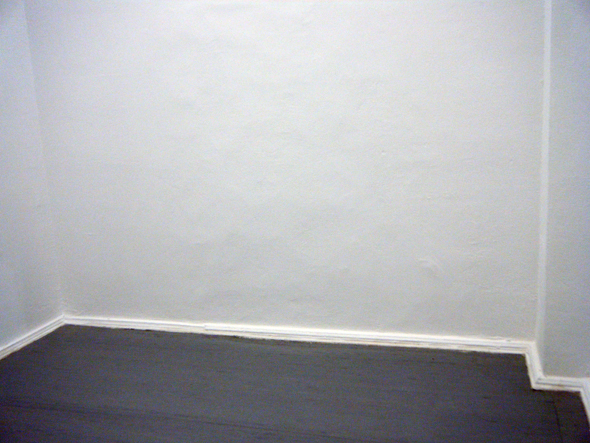 Paintings, Objects and Installations from twelve artists. Space as habitat, space as experience and space as a notion.

While some craft unorthodox miniature spaces with a variety of materials like Martin Schepers (“Verwerfungen”, 2011), others choose a more pictorial approach like Franziska Hünig (“Ohne Titel”, 2012) and fill the walls with large pieces of roughly painted materials like an advertising banner campaign affected by sun and rain over the time.

The diversity of the works presented is refreshing, and moving from one room to the next is at times a small surprise. Just when you thought things couldn’t be more minimal after seeing Ilona Kálnoky’s sleek and simple “strrr…” (2011) comprised by a large rubberband that binds floor and ceiling in a discreet and yet powerful way, comes Christl Mudrak with her 2012 work “Clearing and Cleansing”.

Mudrak’s piece demands us to force all of our senses into play. Being used to understanding space primarily with our vision, we may feel a bit awkward at first seeing that there is nothing in that room. A little offended even. “Is she kidding?” “Is this her way to laugh at out expense?” After spending a few moments in the room the viewer realizes they didn’t need vision, or hearing, not even touch, because this work is to be experienced with the sense of smell. Mudrak used vacuum cleaners and detergents as well as prayers and wishes -as the hand out flyer informs us- to clean the space. Instead of adding her works to it, she decided to cleverly remove whatever was already there. 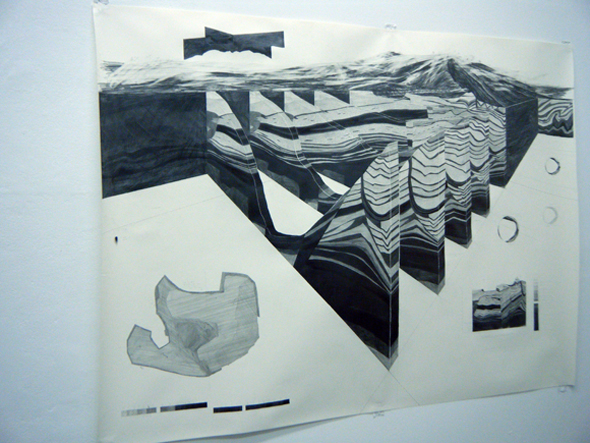 Ina Geißler (“Eins zum Anderen” 1-12, 2012) and Geka Heinke (“Kreise aufsteigend”, 2012) colourful works create repetitive patterns that define space in almost opposite ways. Geißler’s framed works have a calming presence while Heinke’s large wall painting demands the audience’s attention.
Anke Mila Menck’s reflective bow structure (“Bo”, 2012) separates the room and reshapes the flow of the audience in it. Functioning in a similar way, Rebecca Michaelis’s “Bendpaintings” 1 and 2 (2012) look like elegantly redesigned mirror surfaced skateboards which will be crushed as soon as someone even tries to use them.

Nicola Stäglich participates in the exhibition with a small collection of plastic and wooden three dimensional objects ( o.T., 2012, o.T., 2012, and “deformation”). His works use basic geometric forms to play with colour, light and shade.

Overall an interesting exhibition using space as a point of departure that seems to lead each of the participating artists in completely different, but equally interesting, journeys.