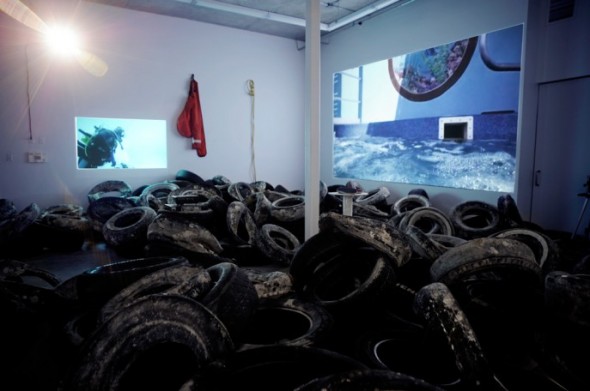 Miami’s Charest-Weinberg Gallery is currently host to ‘Eclipse’, an exhibition by Berlin-based artist Hannes Bend. In 1972, the Broward Artificial Reef Inc. Company (BARINC) began dumping car tires off the coast of Fort Lauderdale, in the hopes that they would foster marine life through the introduction of a manmade reef. Comprised of close to 2,000,000 tires today, the Osborne is now an ecological catastrophe. The masterminds of the Osborne reef were not aware at the time that coral would not grow on rubber, or that the metal latches holding the tires together would disintegrate after years in saltwater. Loose tires, pushed by strong currents, crashed into the natural reef, causing damage, disease and death to the delicate coral.

Bend’s exhibition integrates detritus extracted from the Osborne reef with video footage highlighting the dystopic interventions of industrialized society into the natural environment. Insofar as it explores the sublimity of the natural landscape – vast expanses of sky and sea – Bend’s work has been hailed as a German Romanticism for the 21st Century. What distances Bend’s work from the likes of Caspar David Friedrich – who painted the area around Bend’s childhood home in Neustadt at the turn of the 19th Century – is his fascination with industrial tropes, envisioned utopias and their often detrimental effects. 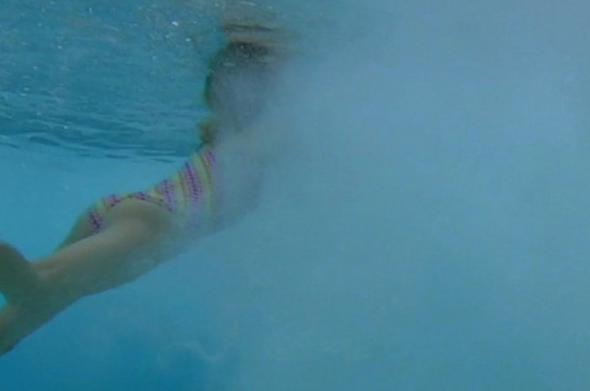 Two films are on display in the gallery: Eclipse, 2012 shows blue sky interrupted by passing cars, industrial equipment, and the underbellies of passenger airplanes while Aquadome, 2012 juxtaposes different watery environments: the shoreline, the Osborne Reef, aquariums and swimming pools.The mechanical soundscape lends a decidedly uneasy tension to the images of nature.

Bend, who grew up near the Baltic Sea and became a member of Greenpeace at the age of 7, combines his environmental and artistic interests in this exhibition in the hopes of raising awareness about the necessity of a large-scale intervention at the Osborne.