A strong line-up for this year’s gallery weekend has implications for one’s sanity, footwear, and visual deciphering abilities (you know, when a piece stops being a piece by an artist, but starts blending into an underlying noise, so that all that is registered is “painting” or “neon” or “large-scale installation with a guillotine”). Actually, speaking of neon, there is rather a lot of it around at GW. Jonas Burgert, Andreas Golder, Katharina Grosse. I blame American Apparel. 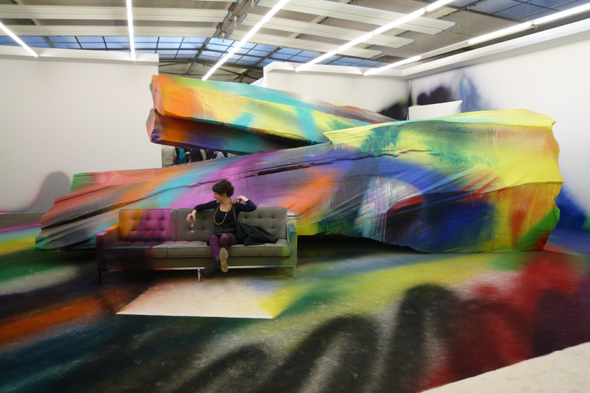 Katharina Grosse: ‘They had Taken Things Along to Eat Together’, 2012 // Photo by Anna Russ

The first stop was at the classic “Open for gallery weekend but then not for the rest of the year” space (for others of this ilk, see also Blain Southern, but news is that the gallery is finally ready to go) – Wallstr. 84. The space is owned by Alex Dellal, and this year he teamed up with CFA to show Bruce High Quality Foundation’s giant, inflatable, dancing, singing rats (“Stay With Me Baby”, 2011). Maybe I haven’t been in the art world long enough, but somehow, the presence of silkscreens documenting worker’s protest in a space run by a property tycoon’s son still hasn’t quite lost its ironic touch. The piece itself has enough pathos to be affective.

Then on to Johann König and Katharina Grosse’s vast neon installation, “They had Taken Things Along to Eat Together” which filled most of the main room, and included walls, floor, rug, and retired sofa. (“What is it with the sofas?” demanded my companion. “First Reyle and now this!”) 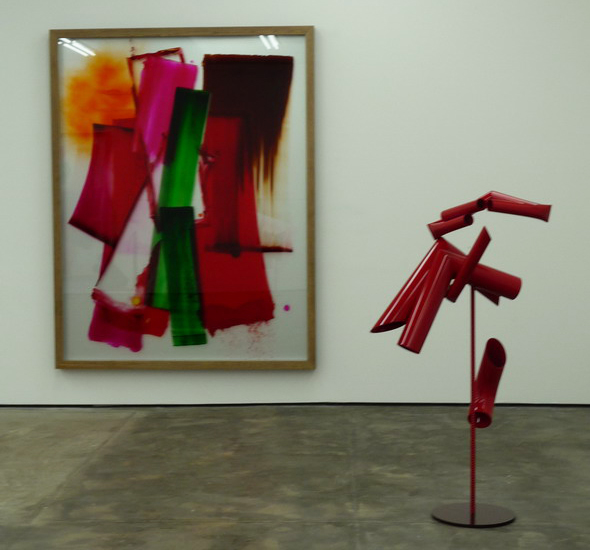 Then on to Wentrup and a pleasingly post-Minimalist show by David Renggli, Drums please. The show featured some rather nice large-scale paintings on glass in near-neon colours – acid aubergines, Bordeaux and green hues, and a series of sculptures made of metal piping in full Minimal tilt. The sculptures were, according to the press release, inspired by the poses of fashion models.

Then on to the full-on blast that is Potsdamer Str. 77-87, aka the Tagesspiegel Gelände. Despite not being part of the official Gallery Weekend programme, Blain Southern had done their damndest to steal the show again this year, showing 13 new paintings and some sculptures by post-Leipzig painter boy and flavour du jour Jonas Burgert. The size was impressive, at a guess the largest pieces were 400 by 700 or so centimetres. Burgert seems to be aiming to reinvigorate large-scale historic genre painting – Marat, say, or Adolf Menzel – via the use of distinctly post-modern subject matter: deformed creatures lolling against post-apocalyptic urban backgrounds. His skill for composition is not matched by his painterly technique: light sources are either oblique or non-existent, and the execution hangs in the no-mans land between bad painting and realism. Still, it’s better than the stuff that his painter colleague Andreas Golder has hanging at Galerie Michael Fuchs in the Mädchenschule, which seems to be comprised of amalgamations of techniques culled from the Sotheby’s catalogue of painters who set auction records. Blain Southern also showed themselves masters of the marketing exercise – it was possible to purchase cardboard binders with poster reproductions of Burgert’s exhibited works. I didn’t ask for how much.

401 contemporary was showing Nadja Franks Low Dry Hot series – pleasingly minimal photography taken in the Nevada desert, photo-tapestries and objects. It served as a beautifully elegant counterpoint to the swagger at Blain Southern.

The prize for most amusing attempt at reification of a serially produced object (aka the Worship my Hirst Award) goes to The Sacred Heart at Side by Side Gallery (also ex-Tagesspiegel) where the gallerist had chosen to show, well, the name is a give-away, images of Christ and sacred hearts, including an impressive C-Print of Andres Serrano’s Piss Christ. I’d go just to see the image that was part of the 1980’s culture wars and contributed to decimating the US National Endowment for the Arts fund. The show includes a silver Hirst sculpture of a heart (“Sacred Heart”, 2005, Edition of 25) pierced with razor blades, pins and barbed wire (crown of thorns, geddit? Thought so). More pathos then.

Jota Castro seemed to be symbolically executing art world hubris at Barbara Thum – he had installed a large shiny guillotine alongside some helium-filled dollar sign balloons. It turned out to be a political statement, however, as a large, ripped, European flag adorned the entrance, and the artist had displayed some well-executed drawings of Sarkozy, Obama et al in strategically smashed glass frames. Castro’s art was a pretty effective demonstration of what most of the stuff on show at the Berlin Biennale tries to be – incisive, witty, and last but not least, intelligent political commentary.

So, on for Saturday! 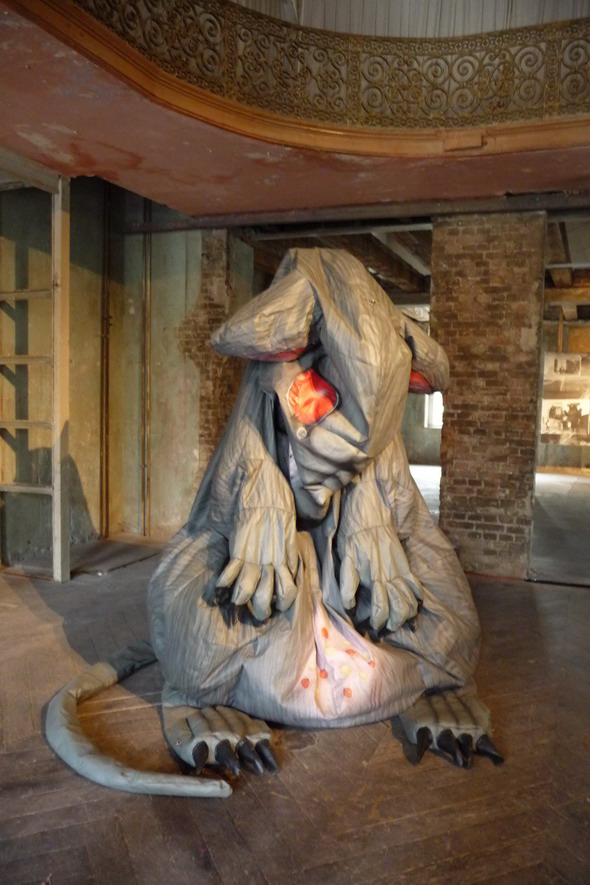