Charlottenburg beckoned with one of three of Cerith Wyn Evans exhibitions at Galerie Daniel Buchholz – the other two are at the Schinkel Pavillion and at Galerie Neu’s Mehringdamm location. Entitled Derive, the show consisted of six works on paper with alphabetic cut outs and one slowly rotating banana plant (dimensions variable, the work list informed me.) The Schinkel Pavillon show also draws on popular Situationist concepts – here we are confronted with Detourne. “Very brave. There was hardly anything in the space” commented one Schinkel visitor. 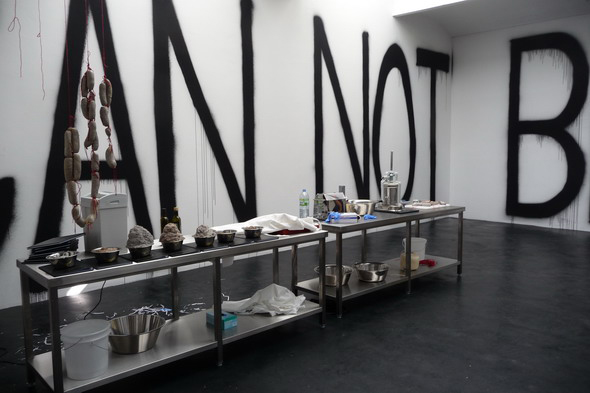 Then on to one of the Gordons – Kim – at Mathew. The Sonic Youth frontwoman had daubed slogans on to paper, and overpainted black knickers, an informal, deliberately slapdash approach reminiscent of the Chicks on Speed aesthetic.

More international art world heavyweights were to be had in Mitte, but the two stand-outs were Rirkrit Tiravanija at Neugerriemschneider and the lovingly juxtaposed Warhol drawings and Arp sculptures at Crone.

Interested to see how the relational aesthetics trope looked 15 years after its inception, I entered the doors of Neugerriemschneider to be greeted by dense clouds of garlic. Following a Dieter Roth sausage recipe, Tiravanija had added shredded copies of the Thai constitution to a traditional North Thai sausage mix in a live performance on Friday, (Freedom can not be simulated, 2012) and strung the resulting product up in the gallery. The second room featured a Turkish Sucuk sausage mix accompanied by shredded copies of the Thilo Sarrazin book, Deutschland Schafft Sich Ab. Amusingly, this wilful destruction of Sarrazin’s tome attracted virtually no raised eyebrows, whereas when Polish artist Martin Zet offered to do the same thing for the biennale, everyone from Süddeutsche Zeitung to Bild got their knickers in a twist, and pulled out the “book-burning, national-socialist” trump card. Is Tiravanija simply to big to criticise, or did the media realise that moralistic tub-thumping was simply quite a dull knee-jerk reaction to pull every time an artist does something even vaguely controversial? Anyway, one cannot help but feel sorry for the gallery assistants – garlic smell sure is tenacious. 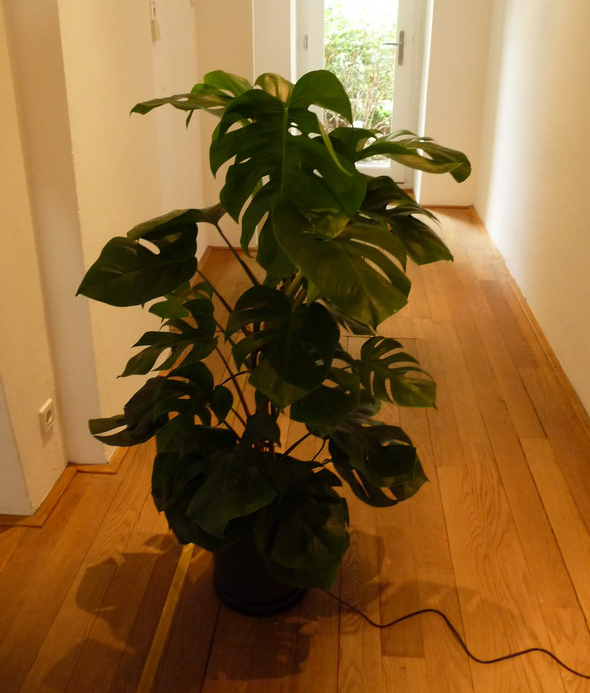 CFA showed a bunch of large-scale Julian Schnabels, who doesn’t really appear to have developed much since the 1980’s. Appropriated images of 18th Century battles, Indian gods and one rather gormless goat apparently give “ethnographic elements an aestheticised reality”. I love press releases. He also daubed the word “Bez” on one of the canvases, which left one wondering at this peculiar homage to the perma-grinning Happy Mondays dancer.

A more aetheticised future was presented at Buchmann who were showing Zaha Hadid’s rather amazing architectural paintings. Glossy car body paint on chrome polyester emphasised the surreal decoupling of such architectural fantasies from a lived, urban reality. Bridges, art galleries and ski-jumps in almost toxic yellow and red hues produced an eerie atmosphere redolent of alienation. Oh yeah, and there were a couple of sculptures that looked like they would have gotten on well with the other sofa-based art.

Crone was bringing some art-historical seriousness into the gallery weekend discourse, coupling Warhol’s line drawings on manila with smaller Hans Arp sculptures (Silhouettes). The relationship between the two artists’ aesthetics was highlighted by the juxtaposition of the pieces. Warhols simple, elegant drawings, often composed of a few curving lines, detailing faces and penises presumably of lovers past echoed Arp’s abstract metal shapes.

Veneklasen Werner were attempting to play the “hip, young, Brooklyn art” card, and were showing Michael William’s (b. 1978) large scale mixed media paintings. One thing that struck me this gallery weekend was the predominance of either a certain format (approx 220 cm by 180 cm) or bright, large-scale installations. It’s as if there is an artist/gallerist worry that smaller pieces may get lost on the marathon collector treks, and leads to quite a lot of the works on the show exhibiting a “look at me” loudness that is more typical of art fair offerings. Either that or the artist in question is very established and can get away with rotating banana plants. Anyway Williams – a visitor summed it up quite well with the words “Twombly for the post-graffiti generation.” 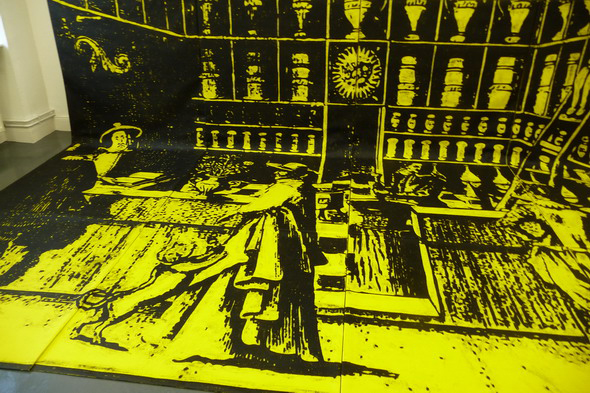 The weekend was rounded off at Klosterfelde and Ester Shipper. Matt Mullican’s piece Two into One becomes Three (2011) comprises of 70 panels of oil-stick and acrylic on canvas rubbings. Originally for a site-specific piece for the Centre Pompidou in Metz, Klosterfelde hat cut up the gallery’s space by creating painting walls. The large-scale panels were around 350 cm in height and snaked around the gallery, enveloping the viewer in yellow and black, and lending a sculptural quality to the paintings. Mullican’s theme was Diderot’s Encyclopedie and Art d’Ecrire, featuring calligraphy, an early pharmacy, alchemic symbols for chemicals and the world of animals among others. Most impressive: the show invited one to linger.

Anyway, that was my tour this gallery weekend. Things I didn’t make but wanted to: Douglas Gordon at Niels Borch Jensen, Thomas Zipp at Baudach, Scheibitz at that new space, Martin Boyce at Johnen and quite a few others. I also didn’t make it to the action painting event at the new Murakami space, Hidari Zingaro in Kreuzberg – was it otaku erotica, as promised to me by the interwebs? Kind of awesome in staid Gräfekiez. See you next year.