There has been a tense debate about the future of New York’s art fairs since Frieze’s Amanda Sharp and Matthew Slotover announced their take on the art metropolis. Having their 180 gallery strong debut in town during May 4 – 7, 2012, the franchise of the well-known spectacle in London’s Regent’s Park now has to withstand the debate about the necessity of another blockbuster art event. 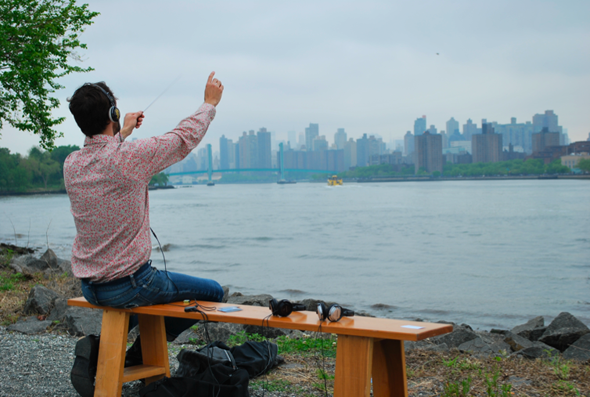 Squashed into massive ferries, one commences the adventure to Randall’s Island over the East River. Used as a site for a poorhouse, a reformatory and an asylum for the mentally imparted during the 19th century, the island now hosts sport facilities, serves as a dump for the city’s Christmas trees – and bears a major art event.

After a pleasant 20-minutes ride, one is flooded onto a plot of green land that anticipates an eccentric atmosphere: Manhattan’s prime food trucks spread delicious whiffs through the sculpture garden in which Frieze projects curated by Cecilia Alemani are arranged. And, a gigantic white serpentine tent was morphed by the Brooklyn-based architecture duo SO-IL and seems ready to sneak a new event into the competitive art fair world.

Inside, the city’s food extravaganza like Fat Radish and Intelligentsia Coffee provide decent edibles that support an easy stroll through the generously proportioned booth landscape. Esther Schipper is blessed with a prime position, conveying the notion that Germany’s well-respected gallery milieu has poise on this high-profile event. But, a fair is about showing plainly and intelligibly what a gallery has to offer. Only Karin Sander’s Mailed Paintings, decoratively hung on an extensive light grey partition, catch the viewer’s attention immediately.

In the center of the tent, a section called “Frame” is devoted to emerging galleries. Here, it becomes obvious that a less cluttered display works better in the accommodating, well-lit curvaceous environment. This holds for Lüttgenmeijer, who are the second of a strong presence of Berlin-based galleries. No other city from Europe is that influential in terms of numbers. Markus Lüttgen and Robert Meijer show only a handful of Ryan McLaughlin’s paintings, neatly tucked into the open booth, and adjacent, Figge von Rosen presents three neo-Minimalist entities by Jose Dávila. Although the contrast could not be more drastic, the two booths compliment each other nicely. It is great to notice that at Frieze, smaller booths aren’t cramped up to the ceiling. 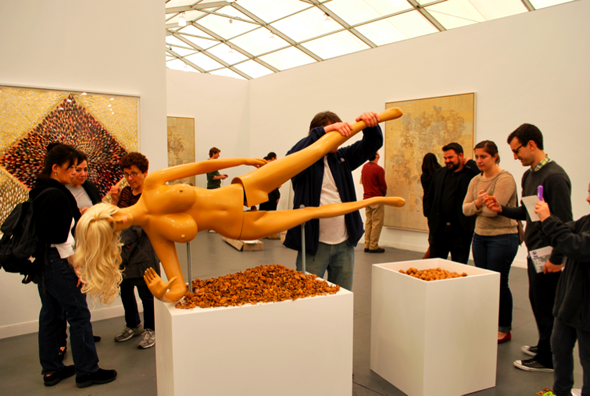 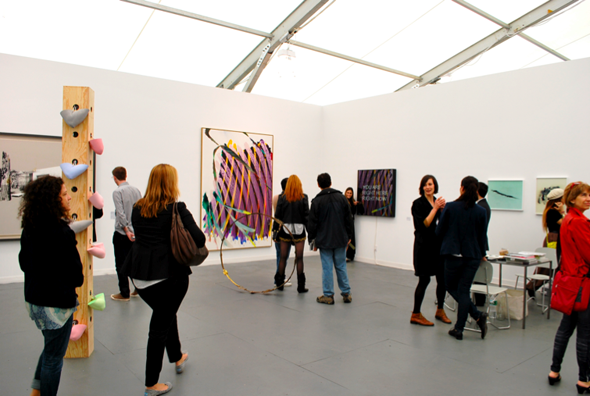 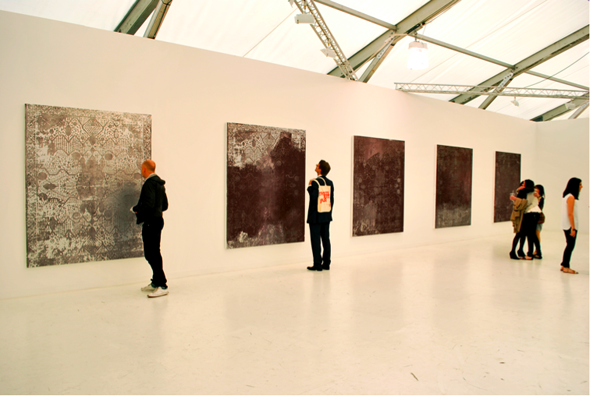 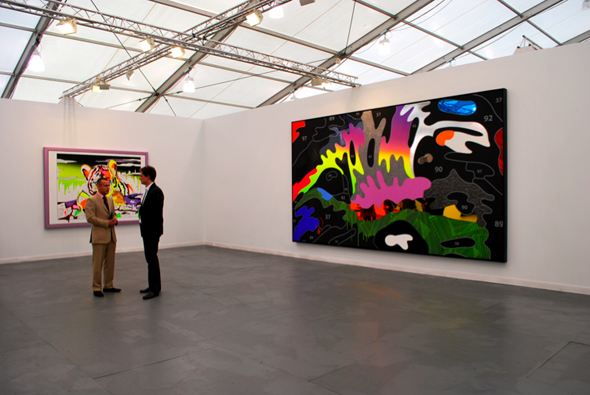 Another approach was chosen by Johan Koenig, who set up a well-curated group show consisting of work by Alicja Kwade, Katharina Grosse, Jeppe Hein, Michael Sailstorfer und Annette Kelm. The overview of his roster of artists introduces a facet of contemporary art that looms large at Frieze 2012: Interaction.
Though in a playful way, the issue of engaging the beholder is encountered frequently. Such as a mannequin that cracks walnuts with no effort in her crotch.
Gagosian shows a mesmerizing series of Rudolf Stingel paintings modeled after Persian Carpets that bring to mind the 2010 installation at the Neue Nationalgalerie Berlin.
Comparable in design, but less interesting in aesthetic terms is Contemporary Fine Art’s hanging of Anselm Reyle. His painting-after-numbers pieces just look too similar to too much other art.

The British mega-artist and Turner Prize winner Anish Kapoor is also part of the rather tedious encounters. His late-minimalist large-scale sculptures challenge the viewer’s visual perception through unusual hues and sensuous textures. Simply tucked to the wall, a giant yellow shell appears to be the fair’s most photogenic work, but not the most engaging. Besides, the fact that the fair’s British media partner The Financial Times featured a full size studio visit in this weekend’s edition is concerning, as it alludes to elitist grouping. Yet, a fair is a fair, and money changes hands in large crowds.

Outside, Frieze projects stages a sculpture program featuring Virginia Overton’s bent mirrors wedged into trees. This, in contrast to Kapoor, is an absurdly beautiful reflection of the natural space and highlights the distinctiveness and cheerfulness of the new art fair.

Frieze is jolly. It communicates an attitude that disregards a certain seriousness and secretiveness of the art world at the Armory. Some may dislike the fact that participants are selected (in contrast to Armory’s democracy), yet this ensures art of high quality showing talent and ability. 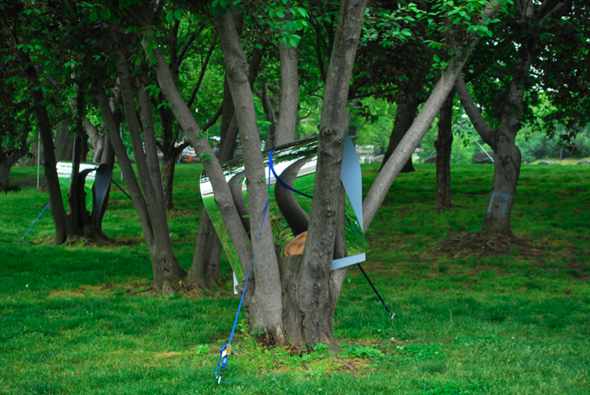 This version of an art fair recalls what a fair was actually intended for. David Zwirner moved parts of his all-Minimalist masterpiece exhibition on the first day, as the Wall Street Journal reports. A blue John McCracken sculpture went for $750,000, and two Donald Judd boxes for $975,000. And according to The Art Market Monitor, Casey Kaplan and Andrea Rosen sold out during the first day what was on display.
An advantage for the artists is the extensive range of publications that list names, so for example the two pages per artist entry in the catalogue. In addition, the Frieze magazine, talks by well-known art historians, artists and curators such as Georges Didi-Huberman or Taryn Simon contribute to a substantial scholarly background.
Albeit much positive critique, Frieze needs to extend their festival character further to make New Yorkers move across the river. The first trial might have been successful, especially as curious collectors hopped on the ferry, but a second round will prove the fair’s dominance over the Armory long term.

To sum up, the visitor gains a serious summary of the contemporary art world curated by professionals, not bought in as is the Armory jungle. A fair might not be the best possible place to look at art, but the varieties of display modes mixed with a good amount of novel highlights make the Frieze Art Fair sure to have a second appearance in New York. This fair feels just as light and joyful as Jêrome Porsperger conducts his invisible concert on the shore of the East River. Let’s put it that way: Frieze doesn’t feel like a fair, it feels like a festival. One that everybody in the art world enjoys because there is nothing like it.

Dina Münzfeld, b. 1989, studied Art History and Business Administration at Humboldt University of Berlin and New York University. She is a curator at Jeffrey Leder Gallery and lives in both cities.