The Spanish word for Zirkel, compass, brings together the concepts of measuring and anchoring, as well as of locating. The concept of the body as compass inspires a collaboration between artists Vanessa Enriquez and Ilya Noé who seek to use the full extent of their bodies through the shared artistic practice of drawing. The idea that a series of drawings can inscribe their bodily particularities and map their physical differences is central to the development of this work.

The artists created a process in which they meet and experiment with a series of inscriptions and erasures using chalk on blackboards. Each one entails a sequence of a minimum of three types of circular movements defined by structured decision-making, using a matrix of variables of motion and form. The blackboards allow them not only to construct areas proportional to their own reach and size but also means that they can experiment freely and learn from the process through a never-ending response to each other and the material. These interactions release the artists from previous modes of working and requires them to develop more demanding physical skills and expansive movements, which result in a graphical grammar of bodily motion and notation that become part of the collaborative aesthetic. 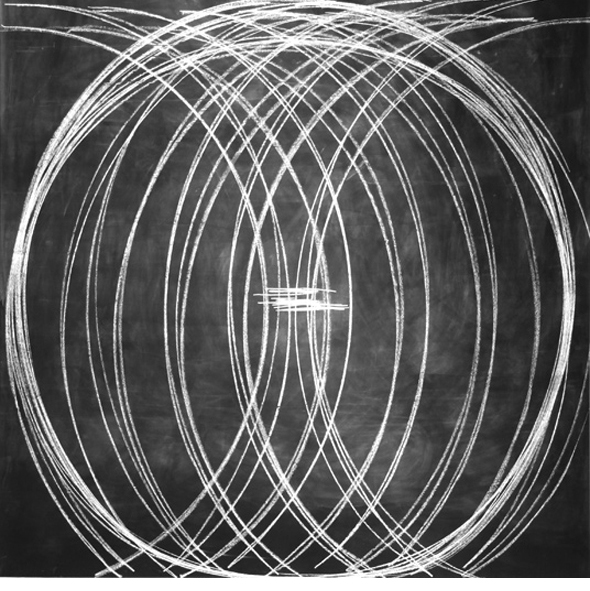 Through the exploration of angles, rotations, extents and limitations of different body articulations and ideas, drawing becomes diagnosis and navigation. Each drawing not only is a fertile ground to study gesture and composition, but also becomes a space of negotiation. In this way Zirkel allows the artists to draw and at the same time acts as a device for measuring, anchoring and locating. It is an ongoing collaboration that both artists intend to continue.

This work is presented at the Mexican Embassy as a a series of five ephemeral drawings realized on site that were composed based on the results of their twenty-eight experiments. An iterative documentation occurs between the large drawings, the looped video, and the material on the table – photographs, notations, and working notes, offering a view into the artists’ process and capturing the open-ended and on-going nature of this exploration.

For more info about the artists: