Born in Athens, Iris Touliatou currently lives and works between her Paris and Berlin studios. One week before the opening of her solo show at the Museum of Contemporary Art in Leipzig (GfZK) I decided to pay her a visit in her studio in Mitte for a sneak preview of the works and inspirations for this show. 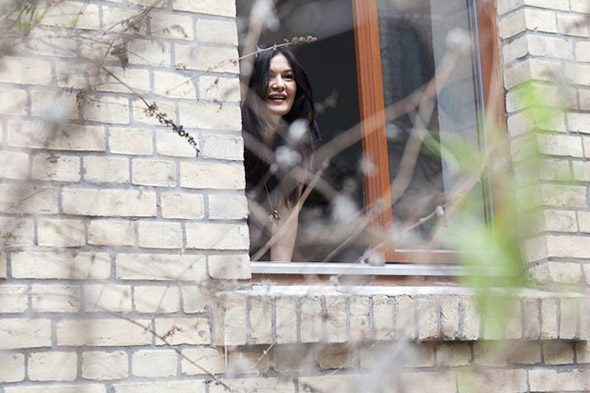 Recipient of the Future of Europe Art Prize for 2012, Iris has been invited to unfold a new series of narratives for this exhibition at the GfZK titled, Matter enclosed in Heavy Brackets. She eagerly explains her concept for the show projecting an aura of anticipation whilst appearing calm and expectant.

The exhibition centers on the cancelled theatrical premiere of The Cradle Will Rock, a play directed by a very young Orson Wells for the Federal Theater Project in New York. Originally set to open in June 6th 1937, the production was shut down due to political pressure and the props were confiscated. Orson Welles moved the cast and audience to another theater, in which the actors sung the entire play from the audience position, in complete absence of props. 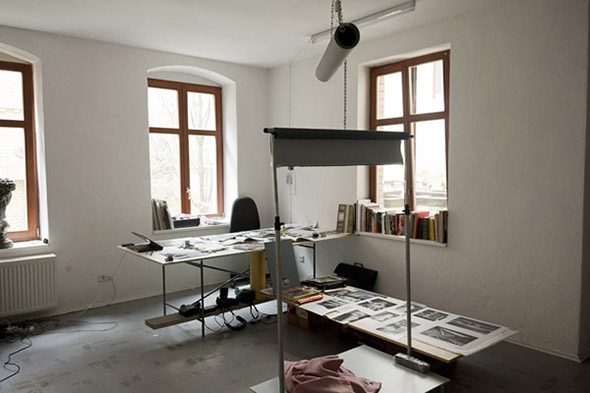 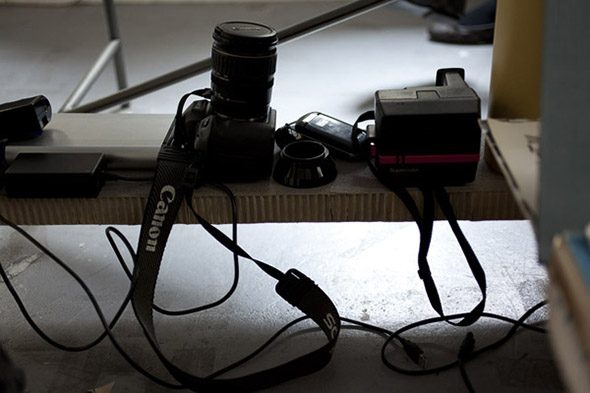 In light of the situation in her native country Iris draws on the analogies between the era of the Great Depression and the contemporary political and social setting. Referencing the 1930’s period of depression as similar to the current European crisis, the workers out of work, the demonstrations, riots, labour movements, bridging parallels between distant eras.

Iris melds these historical facts with personal interpretations and semi-fictional narratives through a process of associations and symbolic gestures. It was important for her to create her exhibition in Leipzig with a kind of emptiness, to give hints or memories of things that are not longer here. 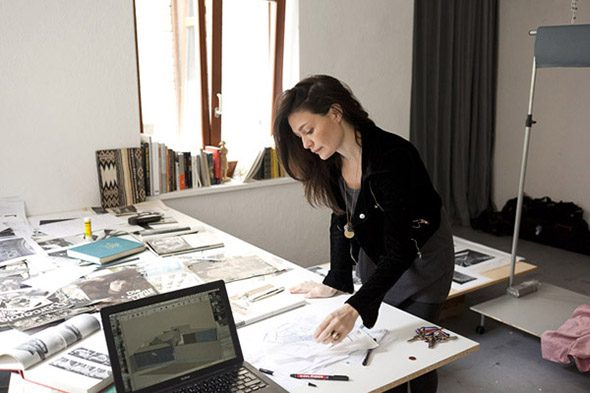 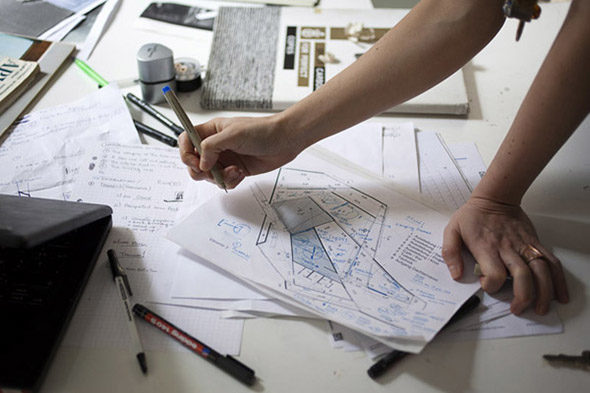 Touliatou’s practice activates a broad variety of media including collage, lens-based work, sculptural installations, performative lectures, script writing – and employs various theatrical mechanisms and display techniques. Rather than a nostalgic approach, her compositions and sculptures indicate a frozen moment in time. Her work constantly crosses the boundaries to float somewhere between memory and expectation, the tangible and intangible, the seen and foreseen, fact and hypothesis. Blurring the lines between theatre and society in order to create a continuous on-and-off stage, an exchange of subject and object, audience and actor.

She explains how she plays with the double meaning of the term ‘suspend’ as both a narrative cliff-hanger and a gravity-defying support. She suggests that modernity embraces opposites, such as pragmatism and mysticism that performs a kind of balancing act between reality and fiction, between the physical and the allegorical. 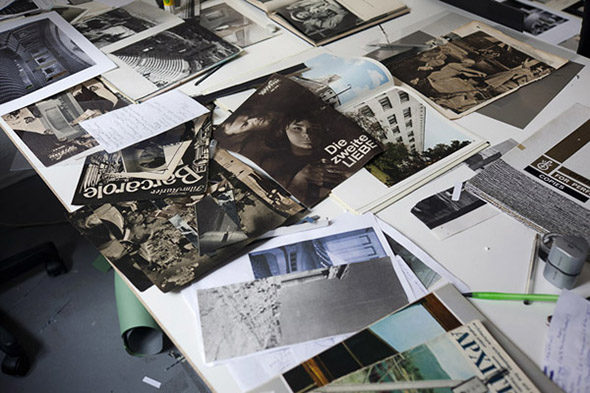 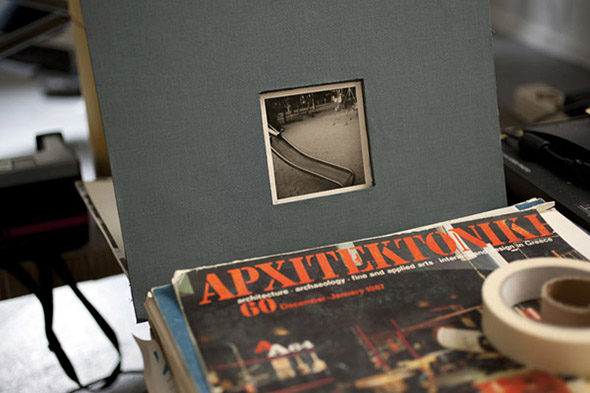 Reflecting the research and process behind her practice, Iris’s studio is organised, her work bench piled up with open books and archival material creating a blanket of black and white images of modern architecture and theatre sets. In one instance, Iris recounts the story of her pursuit to track down a book in Berlin, only to discover it almost by accident in a small store in Leipzig, right by the Museum where she was planning her show. The book at the heart of this story, depicting works of German theatre architect Oskar Kaufmann, was used as the basis for her collage work for the exhibition.

It is now one year since her first solo show in Berlin and it was this occasion on which I first met her. I recall she arrived at DUVE Berlin to discuss her upcoming solo show entitled, On The Breaking Act of Seeing Through the Other Side of Grounds and Things which opened in March 2011. I recall listening in awe to the precision and clarity with which she was speaking of her work; her choice of words indicating the same attention to detail, accuracy, beauty and delicacy that she applies to her artworks. 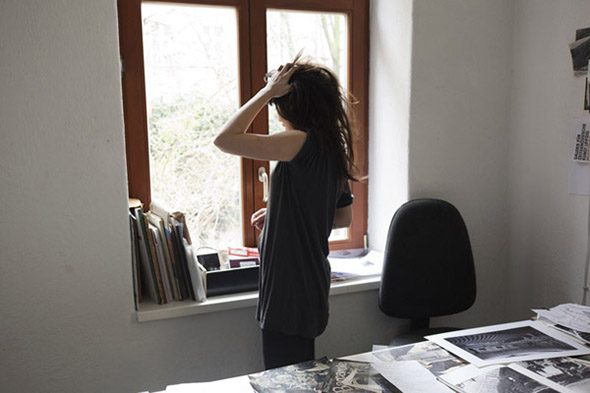 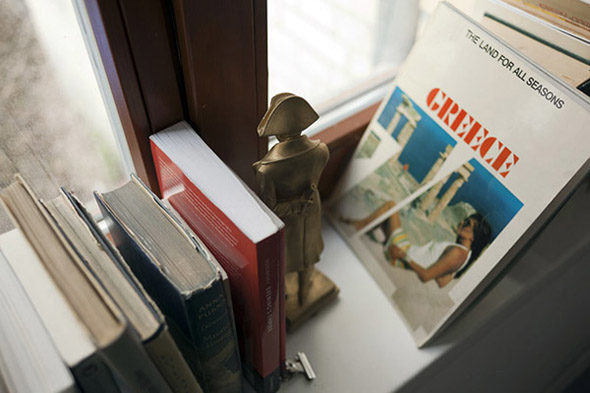 She discussed concepts that would later evolve into a series of work based on her continual research that investigates and employs references from a wide range of historical sources such as cinema, modernist architecture, theater design, literature, science and stage magic. Pat projects by Iris have investigated Sergei Eisenstein’s unrealized film The Glass House, Eric Rohmer’s TV documentaries on French urbanism, stage magician Jasper Maskelyne’s illusions performed in the World War II theater of operations, and the multifaceted drama of the rise and fall of a Greek modernist hotel chain shown at the Palais de Tokyo in Paris. 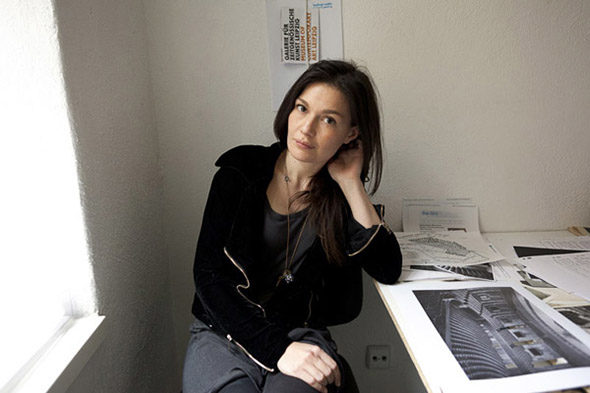 When leaving the studio I take a moment to reflect on Iris not only as an artist but also as a dear friend observing the way in which her career is surely and steadily taking off. She is an artist with true vision; an artist to watch out for, it is her intellect, her research, her passion, drive and grace that are a true admiration.