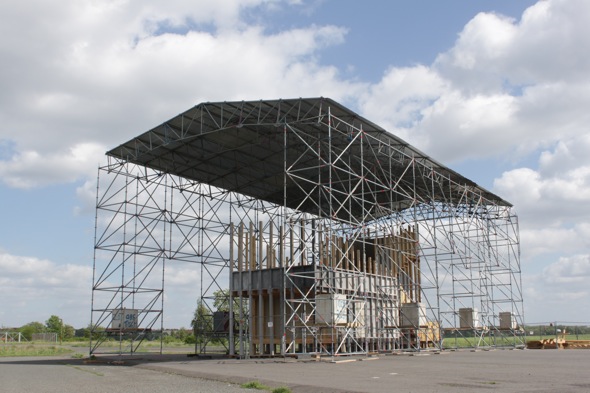 raumlaborberlin: “Die Grosse Weltausstellung: The World Is Not Fair”, pavilion in progress

Article by Alison Hugill, video production by Dan Dorocic and Alison Hugill in Berlin; Saturday, May 19, 2012

Amid debates over future uses for the soon-defunct Tegel airport, and on the eve of the 2012 London Summer Olympics, architectural collective raumlaborberlin and three-theatre ensemble Hebbel am Ufer (HAU) have joined forces to critically reinterpret the meaning of the traditional World Fair. The organizers begin from the premise that world fairs are inherently flawed – displaying unapologetically nationalist, imperialist and colonialist agendas– and that they have historically offered few noticeable benefits to the hosting cities or their urban populations. By preemptively descending upon these disused urban spaces (in this case, the former Tempelhof airfield) that are so often hijacked by the city for monumental Expo-style projects, they offer their own take on the World Fair. Die Grosse Weltausstellung: The World is Not Fair aims to subject the entire infrastructure of the World Fair to a playful critique and ultimately expose its archaic ideological underpinning.

To this end, fifteen artists have been invited to design pavilions at Tempelhof, where the event is set to run from the 1st until the 24th of June. Each pavilion will act as a lens through which the participating visual artists, performers and filmmakers can develop their subjective and political reflections on the world. The fair’s attendees are encouraged to tour the expansive airfield and visit each unique pavilion, mirroring the spatial flow of traditional world fairs. 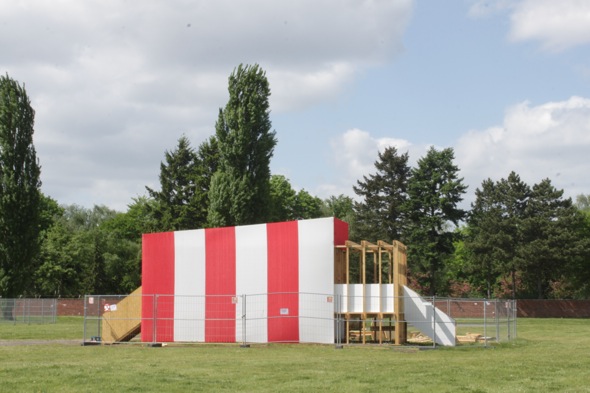 raumlaborberlin: “Die Grosse Weltausstellung: The World Is Not Fair”, pavilion in progress

Presently, architects, students and participating artists are hard at work constructing each of the fifteen brand new site-specific, temporary structures for the Weltausstellung.

One of these structures, known as the ‘Camp of the Renegades’ and conceived by Berlin-based artists Dellbrügge & de Moll, attempts to envision a kind of retirement community for elderly artists. The idea reflects a growing movement in the Berlin art scene, one that poses questions about the relationship between the more than 10,000 artists living in Berlin and the limits of the city’s urban and social fabric. The honeycomb, hexagonal structures making up this pavilion will provide a model for future community living, encapsulating all the elements necessary for Berlin’s aging artists to sustain themselves: agriculture, housing, storage for the abundance of unsold artworks.

Nearby in the field, director Toshiki Okada from Yokohama, together with his theater troupe chelfitsch, will examine the abstraction and immeasurability of the catastrophic events of Fukushima, in an architectural structure reminiscent of the damaged reactor blocks.

South African video artist, performer, and activist Tracey Rose, will stage a performance in her pavilion, an oversized reconstruction of a black-and-white Blaupunkt television, evoking the one that provided her family with access to world events during the Apartheid period.

Across the taxiway from this pavilion, artist and curator Lukas Feireiss has occupied a preexisting, small underground ammunitions bunker, which he will turn into an ‘Institute for Imaginary Island Studies.’ The grass-covered treasure chamber will offer a space to delve into the legacy of invented islands described in novels and movies. It will also include workshops with kids, in which they are encouraged to invent new imaginary islands and utopic spaces themselves.

We spoke with performance art collective machina eX on the site of their interactive pavilion at Tempelhof:

Dan Dorocic (B.Sc from McGill University) is currently a student of architecture at the Bergen Arkitektskole in Norway and works at raumlaborberlin.