The simple word Weighted turns a London-based private art collection’s exhibit into a wordy adventure. Curator Ellen Mara de Wachter orchestrates nine artists from the Zabludowicz collection in Weighted Words, a show that tackles the relationship between art and language and examines the latter’s function and status in cultures flooded with images. 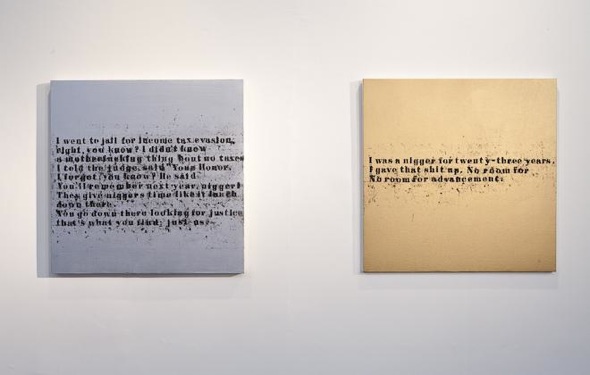 The juxtaposition of Kazimir Malevich and Gilles Deleuze puts the long-time contradiction between art and writing in words: While the artist requested paintings to elicit “pure feeling”, the philosopher stated “only writing is pure”. For a long time, art was restricted to the realm of the representational, and writing to the field of thought and theory. Art is meant to be freed from linguistics and doesn’t need words to explain its meaning. But, as each of the selected artists shows what words can do, both realms merge in a thoughtfully curated path through the various dimensions of communication. Ellen Mara de Wachter’s work at the north-London venue declares that image and text cannot be separated. Instead, word and vision team up to create text-figures with performative capacities.

Glenn Ligon’s monochromatic gold, silver and coal dusted paintings appropriate quotes from authors addressing questions of race, gender and sexuality. Thick, blurry lines disclose how charged racial writing can be. Above the half-round ground floor, his glimmering Warm Broad Glow II recites Gertrude Stein’s Negro Sunshine in irregularly coated neon tubes. In contrast to Stein, who used the words in Three Lives as a repetition to lessen their effect, Ligon’s glowing copy mesmerizes. Inevitably, Tracey Emin’s neon scribbles come to mind, but Ligon’s rich contextuality makes this installation a more complex one. Furthermore, his coal dusted compositions recall Jasper John’s chunky numbers in a grid, yet the content “I was a nigger for twenty-three years. I gave that shit up. No room for. No room for advancement.” is what outweighs the past. 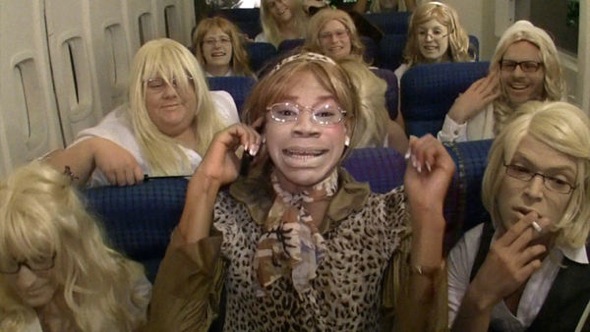 Omer Fast’s two-screen work Her Face Was Covered (2011) points to discrepancies between visual and verbal language. On the first screen, a supposedly American officer comments on an attack in rural Afghanistan. He pragmatically describes how his troop ‘took out’ a seemingly inculpable woman while we see a high-angle post-attack shot. The second screen features rather random images from Google, interspersed with typed excerpts from the narrative. So does for example “She was wearing a burka” contrastingly to what the actual woman in Afghanistan would look like, show a woman of European origin, who wrapped pieces of fabric around her head. Thus, Google poignantly indicates the fallacy of the American officer. But, next to the other artists Ed Atkins, Ruth Ewan, Dani Gal, Mary Reid Kelley, Anri Sala and Alexandre Singh, Omer Fast’s installation remains the strongest position, showing how the iconicity of language works. Linguistics, just as art, has infinite meanings. 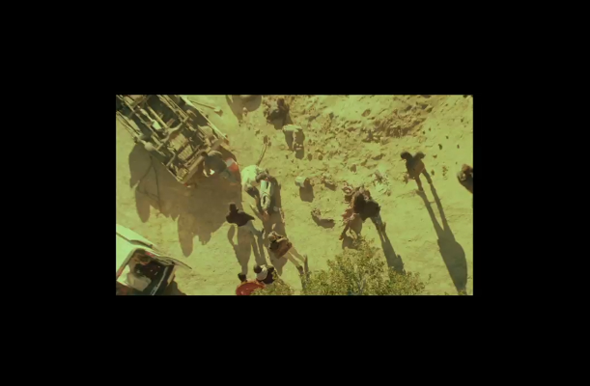 Dina Münzfeld, b. 1989, studied Art History and Business Administration at Humboldt University of Berlin and New York University. She is a curator at Jeffrey Leder Gallery and lives in both cities.