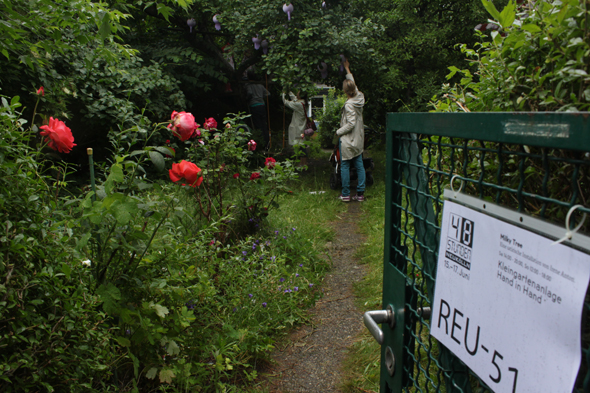 Article and photos by Alison Hugill in Berlin; Wednesday, June 20, 2012

Last week I picked up a program for 48 Stunden Neukölln, the weekend-long arts festival taking place in Berlin’s southeastern Neukölln neighbourhood. The sheer number of exhibits, installations, performances and events on offer made any kind of systematic planning impossible and when the festival began on Friday night I was none the wiser about where to start (the program’s listings and maps proving quite baffling to navigate). As the festival kicked off, I realized that my best bet was to just start walking: with something on display in nearly every café, bar, electronics shop and späti, this was the way to see as many shows as possible. In terms of quality control, however, I relied on friends and strangers that I passed on the street for recommendations. Everyone seemed to know, personally, at least one artist exhibiting their work in the neighbourhood. 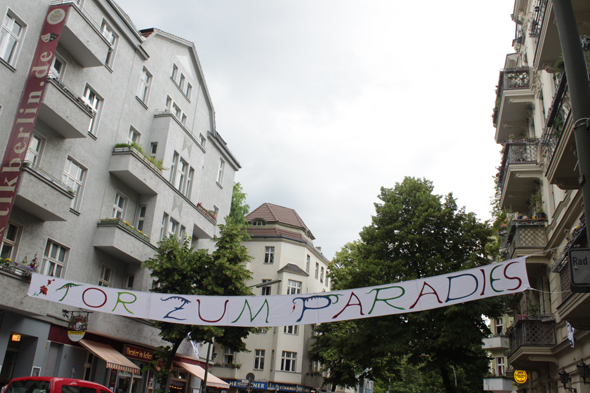 I entered the festival through the ‘Tor zum Paradies’ on Weserstrasse. Weaving in and out of courtyards and cafes, taking in a wide range of good and terrible art, I came to a gallery space, at the corner of Tellstrasse, called Weserland. Inside, the ‘Shredder Shop,’ an installation by Jonas Wilisch, invited participants to write out and finally shred all of their debts and ‘filth’ – financial, personal, social – into a growing pile of shredded secrets on the floor. The indebted person would then receive a dated confirmation of their submitted debts, stamped ‘ERLEDIGT’ (COMPLETE). With a clear conscious, my debts processed, I felt bold enough to enter the next room in Weserland, its door covered by a plastic, slaughterhouse-style curtain and marked ‘Attention! Use at own risk!’ This installation, entitled Waten (Wade) and coproduced by Wilisch and Simon Bredt, was a disorienting room filled entirely with fog from a smoke machine. Visitors could see nothing but the chandelier hanging ominously from the ceiling, and had to slowly wade through the fog, touching the walls and occasionally each other to orient themselves toward the exit. This turned out to be the perfect five minutes of fear and confusion I needed to continue my journey through the festival in a fresh light. 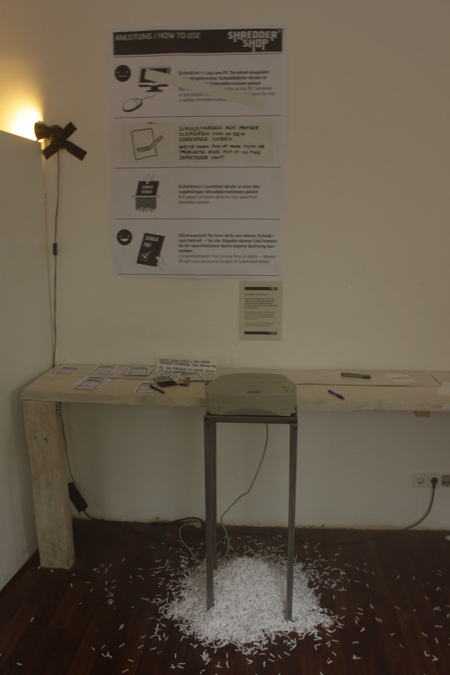 Continuing southward on Weichselstrasse, I stopped to meet some friends at a bar called ‘Broschek.’ During the 48 Stunden festival, this space was host to Italian architect Manfred Eccli’s piece ‘Helmet.’ The installation seemed, at first, unassuming: a grey felt rectangle hanging from the ceiling above a candlelit table for two. Visitors were invited to sit at the table, with their heads covered by the helmet from the shoulders up. The installation was fascinating from either way you approached it: inside, you felt the intense intimacy (whether forced or desired) with your tablemate, while outside, you could analyze the participants’ body language, independent of their facial expressions and other crucial signifiers. The helmet might also serve as a space of isolation, a place to work without visual distractions. 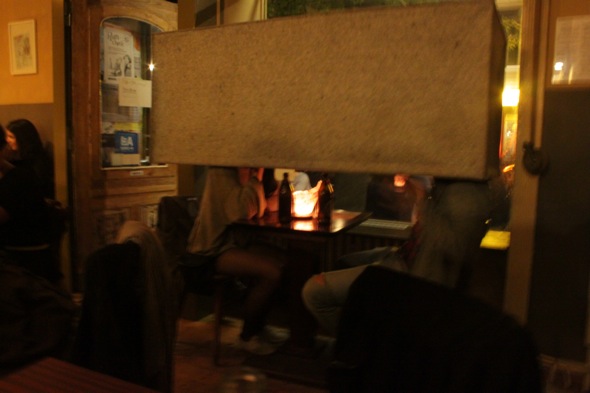 On Saturday afternoon, I set out again. The rain had just cleared and my first stop was the ‘Kleingartenanlage Hand in Hand’ off of Pflügerstrasse. This beautiful little sanctuary of well-kept garden plots was open to the public and almost everyone in the small outdoor ‘community’ was participating in 48 Stunden Neukölln. There were flea markets, yard sales, craft exhibits, installations and, in a communal area at the end of the path, a coffee and bake sale. Exiting again on a strange, abandoned section of Pflügerstrasse I came to an open-air photography exhibition by Zara Pfeifer, mounted on a green fence. Her show ‘Chimera – City Walks’ extended along the block, with one haunting photo of a masked man pasted onto a large billboard above the fence. 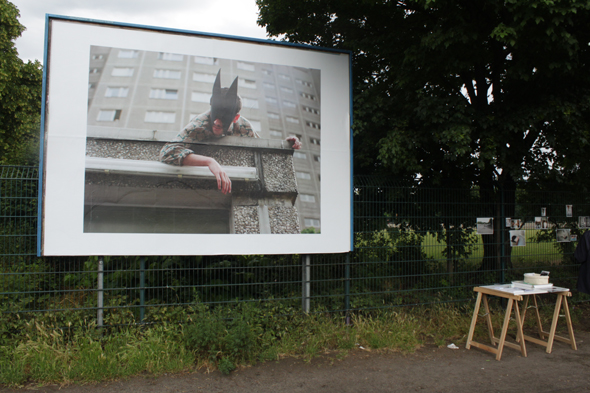 Later, on Isarstrasse, I randomly stumbled upon the ‘Invalid Robot Factory.’ It was an uncanny ‘performance’ by two handmade robots, designed by Teija and Pekka Isorättyä to look like elderly people with walkers, white hair pasted atop their mechanical heads. The robot invalids hobbled around the gallery space haphazardly as visitors tried to dodge them.

Throughout the weekend, there was an exciting vibe in the air in Neukölln. Everyone seemed to be out on the street, there was music on every corner, and people were connecting, often silently, over their aesthetic opinions about different exhibitions and performances. There were some very playful events and some other, more serious spaces for historical or subjective reflections about the neighbourhood. On Richardstrasse, for example, the antifascist Galerie Olga Benario showed photographs of ‘Das rote Neukölln’ (Red Neukölln) taken between 1918 and 1933. 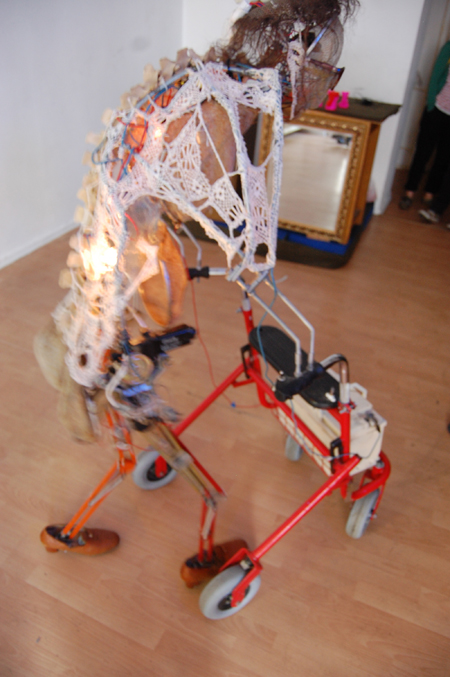