In his new series “Island Me,” Berlin-based artist Jens Hanke presents pieces that challenge the conventions of traditional charcoal-drawings. On large paper primed with bone glue, Hanke creates fantastical landscapes, often creating a sense of ambiguity that allows the viewer to have an intensely personal experience. His techniques vary depending on the piece, but conflicting densities of charcoal, rubbings, and erasures allow for consistent creative definitions of space.

Hanke extends such themes from his former series “Mining Ground- Digging Field” (2009) and “Synapsale Nachbilder” (2011). His works are not straightforward in terms of purpose or meaning, but rather have an emotional weightiness that anchors viewers idiosyncratically to different parts of the work. Certain reoccuring pastoral and industrial images allow the audience to feel isolated in the realm of Hanke’s former experiences, whether it is the landscapes from his childhood in East Germany, or his five years spent painting in Chicago. 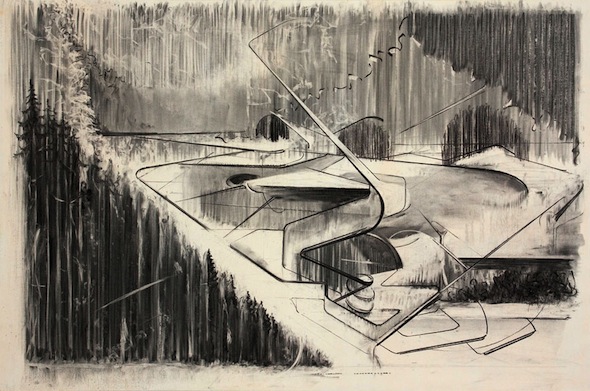 With no predispositions or intentions about the nature of the final product, Hanke allows his creative process to be a largely open one that evolves as he continually interacts with the piece. However, he still maintains a level of subjectivity by titling his works completely in English, a language he says, that though he has a mastery of, he also has a certain distance from. He believes that if he were to start working with pieces named in German, it would be too close to his personal sphere, blurring the piece’s expression with his own identity at a perilous level. 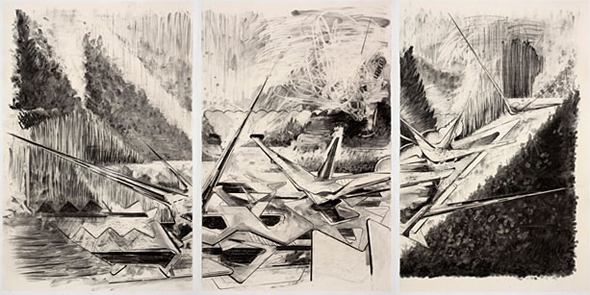 The staggering amount of detail in Hanke’s striking works captures viewers, placing them into the simultaneously archaic and futuristic visual realities he creates. As his internationality and ageless perspectives appear on the page, his work manifests itself with astounding depth.

Once inside Gallery Hunchentoot, it feels as if there will never be time enough to fully appreciate the magnificence and raw beauty of Jens Hanke’s drawings.

Jens Hanke has an MFA in Graphics and Painting from the Academy for Graphic & Book Art in Leipzig, Germany. He has been the recipient of many awards and scholarships, including a DAAD that allowed him to work on paintings in Chicago for a span of five years. He is currently living in Berlin.

Anna C. Purcell, is pursuing a Bachelor’s degree in English and American Literature. Originally from New York, she is currently living and studying in Berlin.