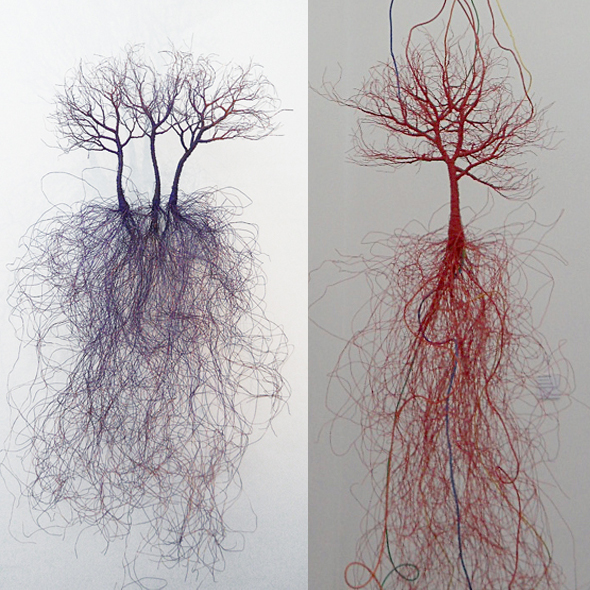 It’s not surprising that Shane Pennington’s first solo show in Berlin has reached critical acclaim amid the abundance of exhibitions, performances and events that fill the city. “Leaving the Shade” is a provocative show, conjuring up deep and personal reflections through diverse and richly developed pieces. To say that Pennington is a multimedia artist fails to capture the kind of exuberance and vast scope of works that comprises “Leaving the Shade.” In using natural elements as motifs, Pennington navigates the psychological and physiological ramifications of a change that is transformative, informative, even destructive.

The tree is the boldest figure in “Leaving the Shade,” featured exclusively in three of the six works on display at Sur la Montagne on Torstrasse. These works, in particular the dark, dense and entangled Black Forest, foreground a tree (and in one case, a series of trees) that hovers between painting and sculpture. Each piece evokes a painterly quality of color: Black Forest and I’m Purple delicately shift from cool tones of purples and blues to deep blacks, where Now and Back Then shouts with the radiating glow of it’s primary blues, yellows, and reds. For Pennington, the tree is a proxy for a larger understanding of humanity. We are connected to trees surely: they give us shade, breathable air, and populate otherwise remote landscapes with locations of safety, repose, and quietude. But, according to Pennington, we are more linked to trees that previously thought, referring to recent genetic studies that drew many parallels between the human genome and that of various species of trees. Ultimately, both on the genetic and cosmic scales, living entities have more in common than discord, and much of what we share is our collective struggle with shifting environments. “Leaving the Shade” is an exploration of this commonality and investigates personal experiences of displacement from one’s “native” landscape – and how one attempts to return home. 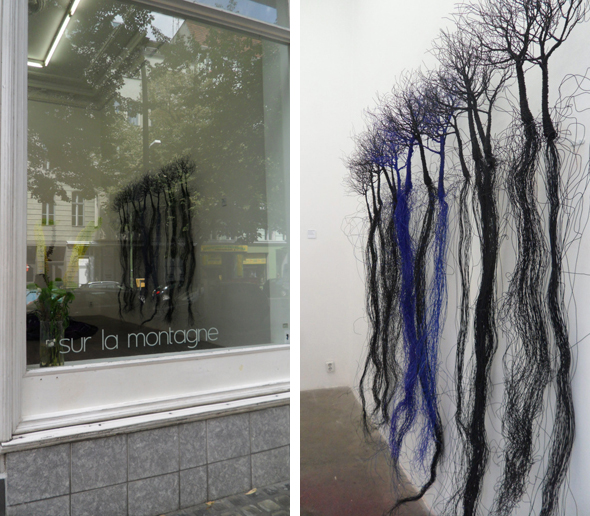 The piece that most strikingly confronts this subject is Solstice. Here Pennington intersects video, audio tracks, sculpture, and 3D imaging and printing technology in order to trace the transformation of five cacti from the Marfa desert in Texas. Pennington scanned and digitally modeled the five cacti at SculptCAD, using Freeform a digital modeling software and printing platform, which then allowed him to 3D print each specimen: the results are perfect replicas of the originals, albeit in white resin. The synthetic doppelgangers are presented in front of three single-channel videos, each presenting a different stage in the cacti’s transformation. The middle video documents the habitat of the original cacti, the Marfa desert, from sunrise until sunset; to its right, a video of the Freeform program at SculptCAD rotating and highlighting different components of the digital cactus model; and to the left is an account of the rebirth of the displaced cactus through the 3D printer. Solstice has a lot going on and can border on overstimulation (in addition the three separate videos and five sculptures, spoken word intermixed with heart-beat like tones fills the room). However, Pennington succeeds in transporting the viewer into the cyclical condition of displacement-transformation-replacement that Solstice aims to embody. 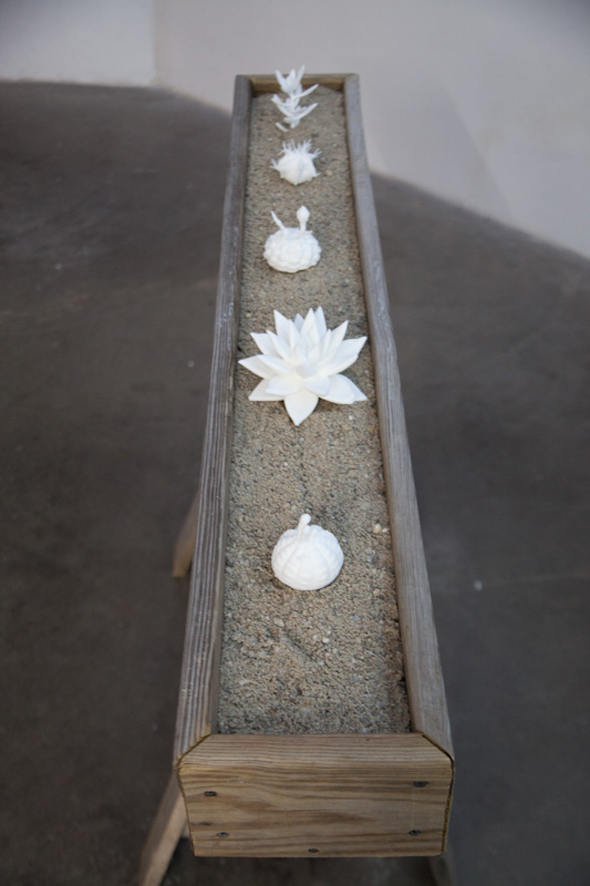 At the end of the day, “Leaving the Shade” is a fearless expression of one artist’s personal investigation. For this first Berlin solo exhibition, Pennington exhibited works not only never shown before, but also techniques never before undertaken by the artist. The result is a show that requires time and digestion of the vast and emphatic works, but it is time well spent. “Leaving the Shade” is up at Sur la Montagne for just a few more days, and is not to be missed.

Shane Pennington is a diverse artist, traversing several mediums and a variety of complex themes. He is the founder of AURORA, a yearly light, video, and sound contemporary arts festival in Dallas. In 2009, he received the “New Dallas Nine” award by D Magazine. His work has been widely featured not only in the U.S., but also in Toronto, Paris, and Sydney.

Elizabeth Feder received her Bachelor of Architecture degree from The Cooper Union for the Advancement of Science and Art in New York City and moved to Berlin in 2010 to further her architectural and urban research with the Deutscher Akademischer Austausch Dienst. She is currently writing for a number of art and architecture platforms and is practicing as part of the [M] AD Design & Architecture team here in Berlin.