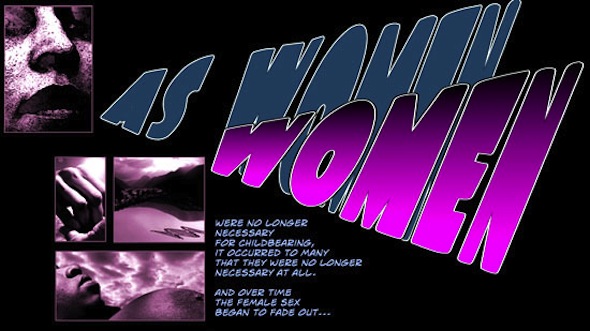 In her graphic history The Genetic Wars, Barbara Confino, a New York City-based artist and writer, explores the repurcussions of a society in which cloning is the primary form of human reproduction. In her fictitious world, she explores the possible ramifications of cloning, which include a diverse set of philosophical, psychological, political, and legal issues. She questions the morality of it as a practice, mourning the subsequent and indisputable loss of individualism and identity.

In this increasingly homogenous society, Confino comments on the idiosynracies of the past and present, as well as the hinderances cloning places on the natural aging process. By highlighting such themes, she raises queries about the ambiguity of personal ownership. Essentially, she asks: can a society have control over an individual- emotionally, mentally, or physically? Are DNA, sexuality, and personal memory commodities? These possibilities appear to be almost too plausible, shocking viewers into a pseudo-reality that seems all too real.

These themes and discussions are manifested through a variety of surrealist images that underline the futuristic nature of the work. The visual portion of the piece conveys the project’s disposition, whereas the cryptic, clever commentary captures the viewer and leads them through the multiplicitous narrative. Confino’s project is translated in a variety of mediums, including: a website installation, a video, and a printed book. It is an exploration of a path that, in today’s world, is increasingly conceivable.

The online installment is available at http://www.thegeneticwars.com. 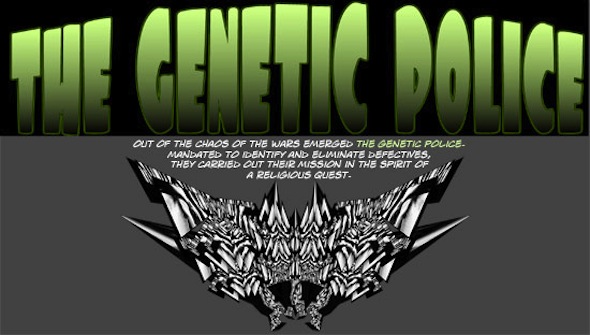 Barbara Confino is a digital artist who works in video, sound, text, stills, and the web. Her work has been featured in the Brooklyn Museum’s ground-breaking show, Digital Printmaking Now, and is housed in such collections as the British Museum Library, the Bibliotheque Nationale de France and the National Film Board of Canada. The Genetic Wars print portfolio was on display at the Central Booking Gallery in Dumbo, May, 2010.

Her writings on art and digital culture have been widely published in such print periodicals as The Village Voice, CITIWEEK, The Christian Science Monitor, ArtsCanada and Travel and Leisure, and can be read on the web in Perceptions In Passing, her online journal of art, society, and travel. She is Associate Editor of the New York Photo Review, www.nyphotoreview.com where she reviews the current photography scene.

For two years she was Artist-In-Residence at New York’s Polytechnic University, and in March 2010 she was invited to present The Genetic Wars at the 12th annual Arts and Technology Conference at Connecticut College.