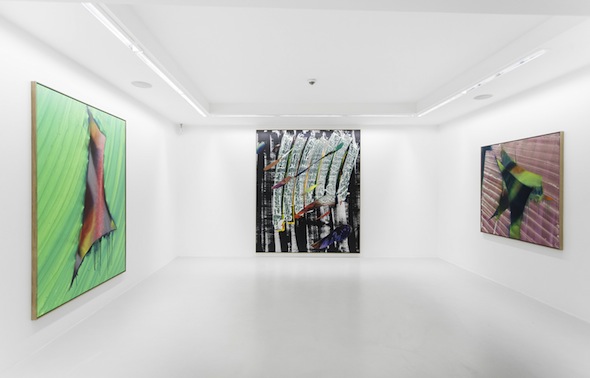 “Can You Spell Mixing”, exhibition view (2012) at DIRIMART, Istanbul / Photo courtesy of DIRIMART

Berlin-based artist Katharina Grosse opened her latest show before the summer season and her first solo show in Dirimart Gallery in Istanbul last month. The show features a curated collection of her canvas works produced between 2009 and 2011 and invites the viewer to study and posses a compact understanding of Grosse’s works.

While known for her large scaled installations and color interventions, Grosse is presenting in Istanbul an intimate study of her canvas work for the viewers in her first solo show in Dirimart. The white negative space of Dirimart has transformed itself to an excavation area for the artist’s canvases. She has performed a balanced intervention for the gallery space that envelopes the viewer into her work. Grosse’s installation work appear in spaces in relationship to its surroundings allowing the work between the architecture and the painting as well as the artist all becomes one. In Can You Spell Mixing? Dirimart’s architecture is highlighted as being a compressed space and the canvas works appear from the white walls, turning the exhibition into a small scaled installation when encountered. 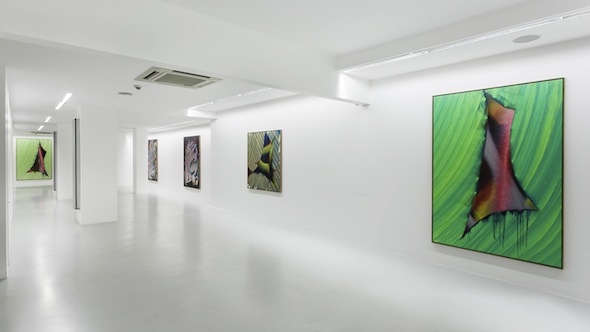 “Can You Spell Mixing”, exhibition view (2012) at DIRIMART, Istanbul / Photo courtesy of DIRIMART

Fascinated by nature and architecture, Grosse’s canvas works are traces of her bodily movements, performed privately in her studio. When the collected works accompany each other in the blank walls of Dirimart, the viewer experiences each framed work- light colored wood with a gap between the frame corner and the canvas, projecting the intimacy and the compressed field of action- individually as well as a whole experience. Within the gallery setting, the condensed works that were produced in the midst of her large scale installations, Katharina Grosse invites us to view the brilliant exhibition from another perspective; an intrusion, perhaps of an exquisite excavation, very personal and very appropriate to acquaint herself to an audience that will have the chance to view this perspective for the duration of summer. 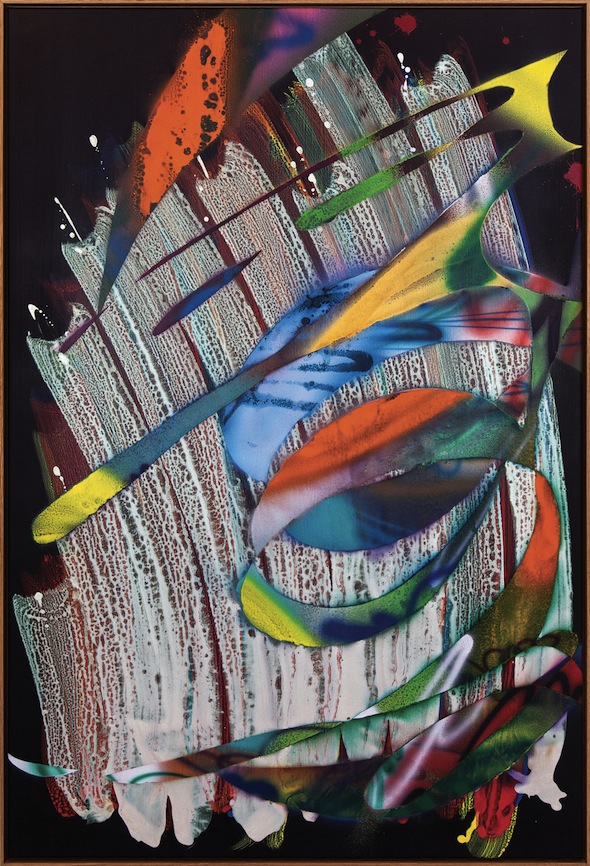 About the artist:
Born in 1961, in Freiburg/Breisgau, Katharina Grosse lives and worked in Berlin, she was
a professor of the Kunsthochschule Berlin Weissensee until she started to work at the
Kunstakademie Düsseldorf in 2010.

Grosse’s artworks have met with a wide audience in various group presentations, biennales, and numerous solo exhibitions at the Denver Art Museum, the Palais de Tokyo, Paris and the Kuntstmuseum Bonn. Her works are collected in public and private collections at various institutions such as the Centre Pompidou, Paris; the Museum of Modern Art, New York; the Kunsthaus Zurich and Kunstammlung NRW, Dusseldorf.

Dirimart Gallery has actively exhibited contemporary artists in Istanbul since it opened in February 2002. The gallery represents young and established Turkish artists as well as having a growing roster of international names.

Lara Ogel holds her undergraduate degree in Film Studies and Graphic Design from Clark University, Worcester, MA. Her professions include but aren’t limited to; artist, writer, film-maker and dreamer. She currently lives and works in Istanbul.