The ruins of Spreepark are fascinating and haunting palimpsests of the utopian promises of Soviet-era urbanism. The abandoned amusement park has been one of Berlin’s underground tourist attractions for nearly a decade. Located along the Spree River, the amusement park was first opened in 1969 as Kulturpark Plänterwald, the only permanent entertainment park in the GDR. After the Wall fell, it was sold, given a ‘western’ makeover and renamed ‘Spreepark.’ In 2001, Spreepark went bankrupt and the space was abandoned.

The sudden withdrawal of Spreepark’s proprietors is palpable when one visits the park today (a gently illegal adventure in trespassing, usually involving scaling fences under the cover of darkness and eventually being escorted to the exit by security). Many of the rides remain on the grounds: the ferris wheel still creaks in the wind, the swan boats appear halted mid-ride in the stagnant ponds and several large dinosaurs lie toppled on the grass. The history of Spreepark has been investigated in several films, installations, and performances since its closure in 2001. 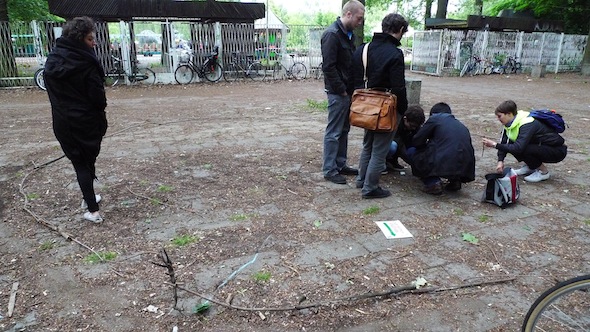 In 2010, a group of artists collectively known as ‘Musement’ were awarded an international research grant by Art Matters NY to investigate the possibilities for using Spreepark as a creative site. After nearly two years of exploration and organization, Musement managed to gain access to the park for an art event during the month of June 2012. The group planned a series of private and public events, residencies and workshops on the site, including a three-week ‘creative camp’ for Berlin-based artists to create site-specific works, as well as a ten-day kultur-exchange program with visiting international artists.

The last weekend of June was billed as an opportunity to engage in ‘interactive exploration’ of the Spreepark site through a series of public tours. Unfortunately, the actuality of the event left much to be desired. Visitors arrived at the park expecting to be able to explore the grounds freely and found, in fact, no indication that Kulturpark was even happening: there was no information at the entrance about where or how to participate in the artistic events.

Speaking with many of the artists involved in the project, a sense of frustration and disappointment with the organization came through, and many complained that it had become a logistical nightmare: a constantly shifting schedule and creative agenda, lack of material budget for the artists and an unsecure access agreement for the site were among the setbacks. While the public portion of the Kulturpark event was allotted a full week in the original program, in the end it was given only two days. By this point most of the artists had either abandoned the project entirely or moved their performances and installations to the surrounding Plänterwald. Instead of engaging with the ruins on the site as originally planned, the remaining artists chose to investigate the fence as the primary ‘ride’ of the park: at present the main source of thrill and adventure on the grounds inasmuch as it straddles the border of public and private space, law and illegality.

The result of this endeavor will be an online publication, highlighting those site-specific works that were realized in the Plänterwald in June. 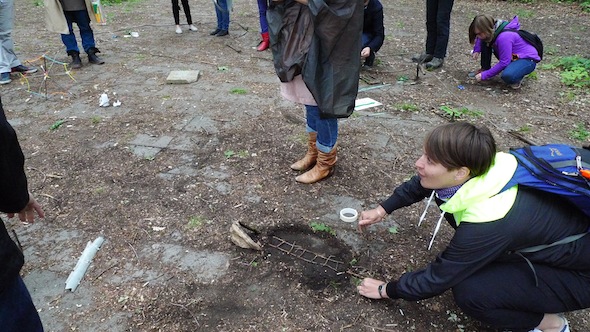 Building on the allures of the once-again unattainable amusement park, one artistic collective involved – the Process Institute – built a two-day camp in the forest called ‘No Comfort Land.’ In this work they sought to reimagine what an amusement park could be, while challenging participants’ comfort zones through a public tour and participatory performance focusing on the auditory experience of ‘listening to the present.’ Despite – or perhaps thanks to – the failures in the organization of the Kulturpark event, artists like the Process Institute were able to present unique projects that revolved around the ever-elusive and untouchable nature of Spreepark itself. Unfortunately, many interested participants were unable to fully take part in these events as Kulturpark’s original objectives disintegrated.