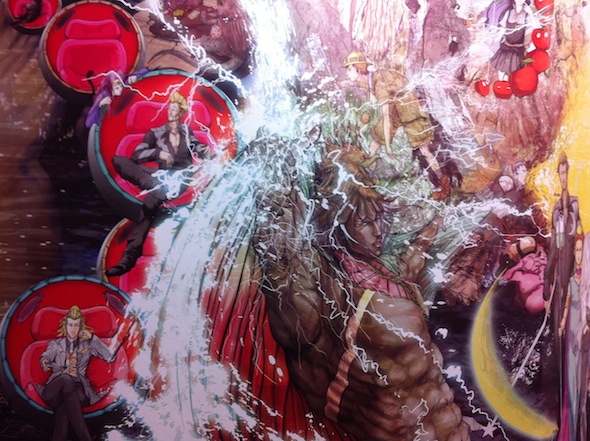 10 years ago, I was a fresh graduate in London working as a gallery assistant at the Serpentine Gallery. The second show I worked on was Takashi Murakami’s KaiKai KiKi exhibition. It was a privilege to be there, I learned a great deal and it was fun. More, it was the funniest change of show, and the most exciting one of my work experience in art galleries. It was with both surprise and excitement that I saw a few of months ago a new gallery opening down my street in the Graefekiez, created by the same amazing Japanese artist.

Having worked for ten years in the game industry, and lived in Tokyo, I have dreamed about such an art space in Europe for a long time. And it is now down my street! The art world and the game world have had some timid conversations already, but that’s it, when they have everything to say to each other. The Computerspielemuseum in Berlin is exhibiting games as games. Hindari Zingaro is exhibiting the work of game artists as fine artists. Which they are. 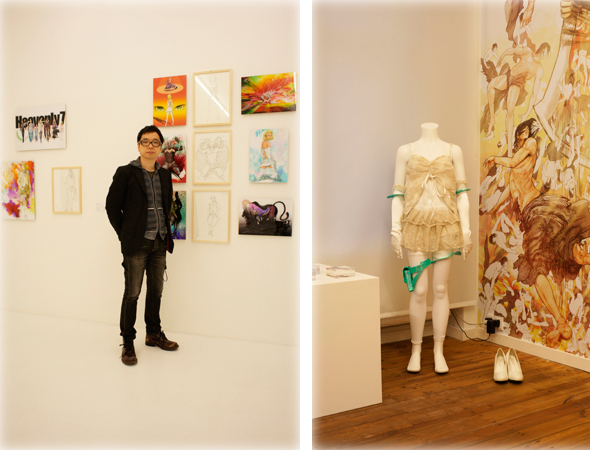 Even though the game industry is bigger than the cinema one, and that games’ reputation has changed a lot for the better, games are still not taken seriously by all. May be because we “play”. Well, so do actors. And it is even more disappointing when it is coming from artists who still seem very dubious about the medium. If you don’t like it, fair enough, but at least be curious towards what is nowadays what cinema was in the thirties. Now, the geeky world has had its part of responsibility, having been closed for long, but it has opened up.

It is an essential thing that such an exhibition space opens in Berlin. Here, if you go to borrow games at the American library in Hallesches Tor, for instance, they will be in the children section. Even games like the GTA series, which are definitely not for children. In the U.K. or in France, games have already established their pedigree. Berlin needed Hindari Zingaro.

For his show, Saweki Takeyasu has transformed the space into a game setting using various acrylic panels and wallpapers. Installations are being shifted and multiply throughout the exhibition period. His work, immerged from the Otaku culture, is relevant of how the Internet is changing the way the artist communicates with his viewers. The medium doesn’t matter much anymore. The virtual world meets the physical gallery space, embracing the viewer into a different artistic reality. Takeyasu is inspired by various myths and ancient religious texts, and in particular, the bible. What was sacred, turns into fantastic tales in his work. Myths are displaced into a new world, and context, and can evoke rich universes like the ones of animator Hayao Miyazaki or of fine artist Matthew Barney. Facing the luxuriant frescos, we are immersed into a universe where all individuals are highly charismatic. All their features are intensified with great detail. There is something obsessive about that abundance, about that whirl of colours and shapes. Some characters are facing us, looking at us, and are represented on our scale. They are both inviting us, and reflecting us, echoing how artists who create their own mythology, reveal the best what fantasy can tell about us.

Takeyasu worked as a designer on “Steel Battalion” and “Okami” for the Japanese game developper Capcom. In 2007, he founded his own video game company “Crim” and performed character design work on Nintendo’s “Zero: Tsukihami no Kamen” and the DS RPG “Infinite Space” before carrying out planning, direction, and character design for “El Shaddai: Ascension of the Metatron.”, a cult game in Japan. He also collaborates with fashion brands such Edwin.