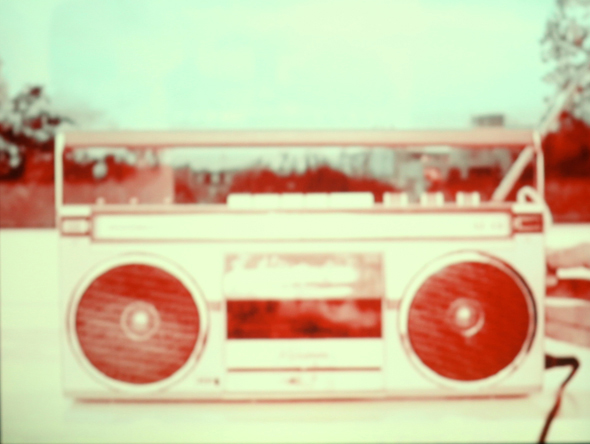 The recent past of political events, media broadcasts, and personal experiences exists in a curious relation to the present—so near it cannot be called historical, yet already separated by a bridge of time. This phenomenon of time just passed can be experienced at the 2011111111111s collective exhibition currently being shown at LEAP.

A project started in early 2011 by Mirak Jamal and Nine Yamamoto-Masson, the show reconstructs the previous year through the work of fourteen contemporary artists working in a variety of mediums: video, installation, photography, projection.

Over the entrance hangs a work by curators Mirak Jamal and Nine Yamamoto-Masson. It is a projection of a gloved hand, elegant but clinical. The image lends an ambiance to the exhibition, throughout which resonates the coldness and impersonality of modern media. The distance between the viewer and the works shown without date or description is reminiscent of the mediation of screens, videos, and broadcasts between ourselves and current events.

Politically relevant yet ambiguous in statement, both the intensity and banality of the recent past shows through the pieces, appearing simultaneously familiar yet unrecognizable. In a large signpost mentioning the Occupied Movement, 2011 is explicitly named. But in most works, the year appears only through vague resemblance, dependant on the viewer’s acquaintance. In one case, we are shown by Tore Wallert the deconstruction of a photographic image, and given the difficulty of representation focused around a specific time period. 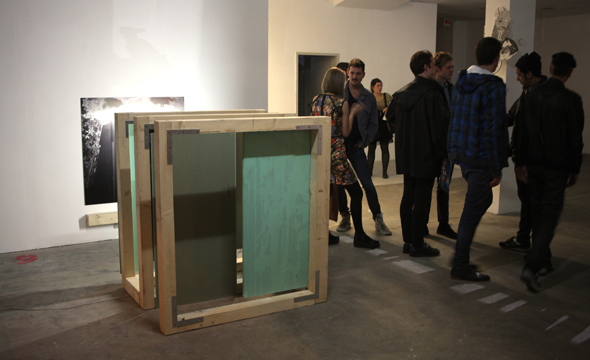 Collectively, the works balance in the space through a similarity of mood and colour. Much like the memory of yesterday, they appear very close to the present-day. Yet through the context of show’s theme, we are reminded of last year’s distance, and of our own distance to modernity’s method of communication.