Over the summer, the entrance level hall of KW Institute became a branch of the Occupy movement, getting dirtier, less museum-like and more Zuccoti-park-like as the Berlin Biennial went on. More confusing were the occupy Kassel tents, outside of the main hall of dOCUMENTA (13), where Wael Shawky’s work was among the pieces on view. The visual effect of the two camps was almost identical, even though one was in a museum and one was protesting outside it. In KW’s current exhibition, there is another attempt to transport a distant physical location, and its visual language, into the main exhibition hall; in order to watch Wael Shawky’s film “Al Araba Al Madfuna”, you walk over mounds of sand and sit on a granite bench. The installation implies that the film’s content might not be enough to express its geography, that it needs a whole physical environment. Winter boots in the desert sand and an early Berlin chill, however, quickly remind you where you are. 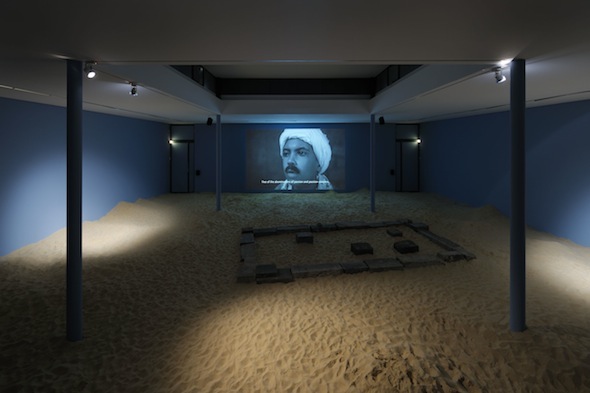 KW’s attempt to transport the environment in which Shawky works into the museum is natural; his work speaks of a strong local identity, in its own tongue and with a pride in Arab history and heritage. It is hard to reproduce any one true image of the complex, untranslatable environment of the current Middle East, and Shawky is not after that. In his recent talk with curator Susanne Pfeffer, Shawky explained that he feels more comfortable with historical subjects, which are freed by time from their commitment to perfect accuracy. Historical distance gives one story many versions, mixing versions of memories, truths and myths into a surreal narrative. In this sense, the uncanny feeling of KW’s desert sand floor fits the film, which is a combination of Shawky’s personal experience of traveling with a local shaman and a humorous tale by the Egyptian author Mohamad Mustagab. A symbolic myth about a local Egyptian village is told in full historical sincerity, but the authoritative narration is delivered by children with fake mustaches, posing as the village elders. The story, and the society it describes so precisely, are cast in question: we might be hearing a crucial formation tale, or a children’s bedtime story. 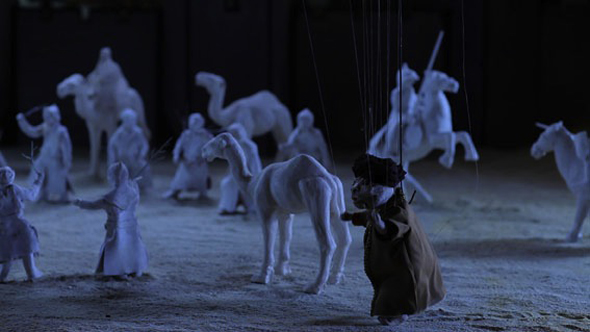 In “Cabaret Crusades”, Shawky again subverts the historical weight of his subject, this time by casting puppets instead of actors. The 61-minute film describes the crusades using only Arab historical sources and and in classical Arabic, as it were through Arab eyes. Puppets and children, Shawky explained, serve the same narrative purpose of removing the element of acting skill in favor of having ideas and text shine through. The puppets are strange hybrids of men and animals, dressed in period outfits and covered in puppet blood for much of the film. It is clear that they are not children’s dolls, but tools for complex expression, a way for Shawky to remove himself once more from the “reality” of history. History was a story played out once, he seems to say, by people or by characters, and since then it lives as a story, retold and recast.