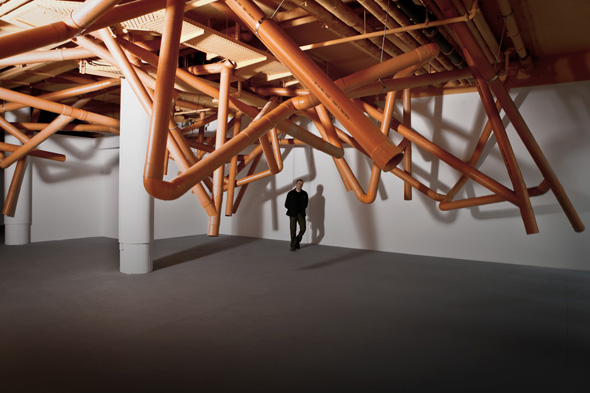 Sculptor Paolo Grassino (Turin, 1967) creates large-scale installations using industrial materials. Plastic piping, cargo pallets, latex and steel are marshalled to create landscapes and figures alluding to chaos and urban dystopia. Animals and humans are rendered in metal and black latex, robbed of their eyes, mouths and ears. Incorporating Arte Povera’s use of low or everyday materials and using a restricted monochromatic palette, he creates a world where there is slippage between imaginary and physical reality. As he has said “I try to construct contemporaneous settings using instruments that belong to our everyday life, moving inside an unreal objectivity”. Grassino participated in this year’s Beaufort Triennale, the 2011 Moscow Biennale and a sculpture exhibition at MACRO, the Rome Museum of Contemporary art, as well as numerous solo and group shows. His latest exhibition which opens on 27th October at Galerie Rolando Anselmi, titled Analgesia_Nero (black analgesic) he is showing a combination of installation and sculpture, including the titular Analgesia_Nero, an installation of blind, deaf and dumb hyenas engaged in the futile task of guarding a pile of derelict crates. Berlin Art Link caught up with the artist on the eve of his opening.

JENI FULTON: The title of your upcoming exhibition at Galerie Rolando Anselmi, is Anagelsia_Nero, or black painkiller, a title which directly alludes to pain and depression. Can you tell me why you chose it?

PAOLO GRASSINO: Analgesia_Nero (2012) is the title of one of the works exhibited. It’s a recent work that recalls a theme I’ve already analyzed some years ago namely, the absence of empathy towards other people’s conditions. More simply, this can be conceived as the insensitivity, apathy, and indifference afflicting the contemporary society. I’ve used the word “black” not because of the colour, but because I believe the cynicism of the society has dramatically increased in the last years. My intention is to make questions, ask, and interrogate what is unknown.. 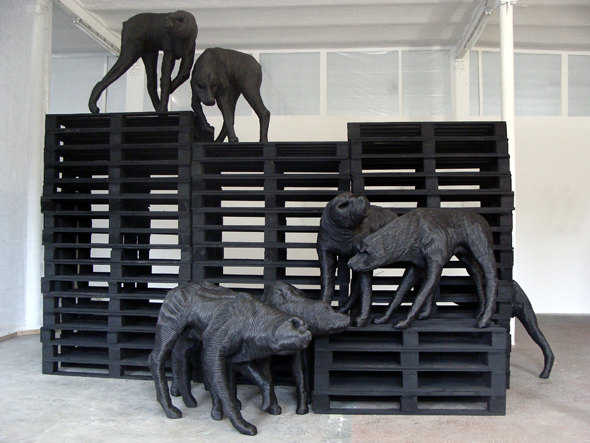 In Analgesia_Nero, the dogs are blind and dumb, and unable to communicate or engage with their environment.

The dogs are without eyes, mouth, ears and tail. They have lost their senses. Their strength only comes from the union of the pack. They protect their territory. They are guardians. With their presence, they defend a wall, a border. I think this work finds its origin in the images and videos of the big exodus of refugees threaten by dictatorships or wars, while the wealthy west protect itself building up walls and warriors, leaving men and women on the other side at their desperate destiny. This is what happens every single day at our boarders.

What is the relationship between the industrial pallets – detritus left behind by a society dominated by Amazon shipping warehouses and just in time delivery schedules and the animals who guard this detritus?

The pallets can be used in several ways. Most of the goods that travel on wheels or rails are stowed on pallets. Their modules can be easily stacked in a pile. It’s easy to build a wall with these material, you don’t need tools nor cement. They are like big LEGO bricks. Put together they can become cages, where you can see through the wood boards. They are not waste of the contemporary society. I am just fascinated by what they are: modules to create architectures inside other architectures. It’s like constructing an unauthorized building. 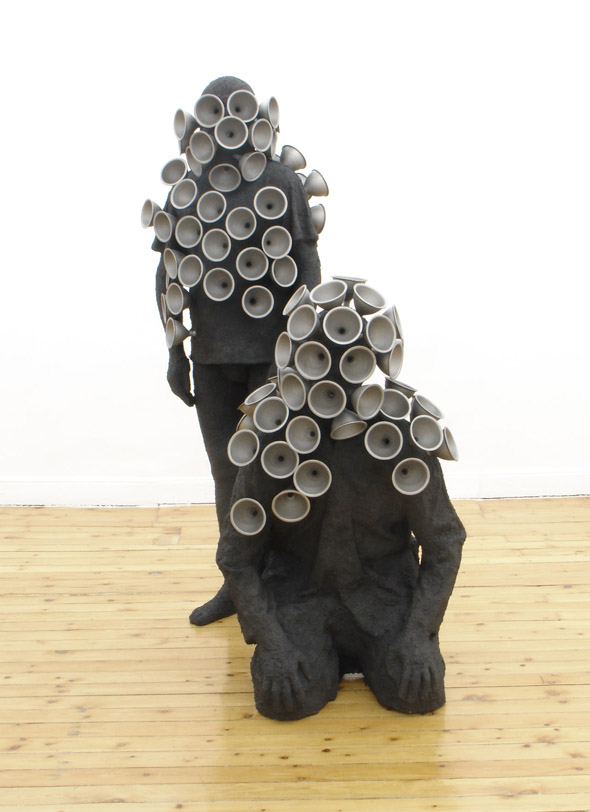 The pack of animals with its connotations of group power was used as a referent by Joseph Beuys and Charles Avery (for his project the Islanders). Avery in particular uses his dog-like animals to reference force without power, an aimless and ultimately futile simulacrum of strength.

In my work the concept of pack is fundamental. I am terrified by masses of people united by a single ideology, faith or doctrine. They are multitudes united by a single thought: the supremacy over the other. They represent threats that we have already experienced in our recent history, and which have permanently hurt our world. I am not in favor of individualism. The pack is the symptom of a social pathology.

In your other works you also examine communication that is cut short, abrogated and ultimately frustrated.

The piece Travasi (2008) is composed of two life-size figures made in fiberglass and concrete, and pierced with aluminium funnels. It’s a reflection about the quality and quantity of information and communication. I think that an excessive communicative flow leads to a greater loss of identity for the person exposed to it.

Jeni Fulton is a writer focusing in and on the international Berlin art scene. She is currently working on her PhD thesis in contemporary art theory. Having taken her MA in Philosophy at the University of Cambridge, she now lives and works in Berlin.