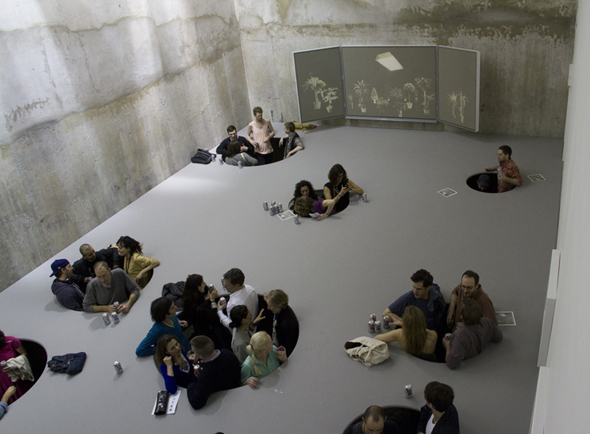 Originally from Indianapolis, Indiana, Grayson Cox draws on his printmaking background, two year sojourn in Tokyo and ergonomic design as inspiration for his sculptural and wall hanging work. Earlier this year, the artist’s solo ‘The Water’s Fine’ at Gasser & Grunert in New York City embodied a more relational aesthetic through his inverted table top installation. Circular spaces of various sizes were removed from an installed wall-to-wall wooden form, forcing viewers to crouch beneath the structure in order to navigate which hole to participate in. Some spaces were meant for multiples – putting people face to face – while other’s were singular manholes situating the viewer in front of an art object. This bridge between 2D, 3D and participatory work is where Cox operates. I sat down with Grayson in his Chelsea gallery earlier this month to discuss his oeuvre and recent residency in Warsaw. 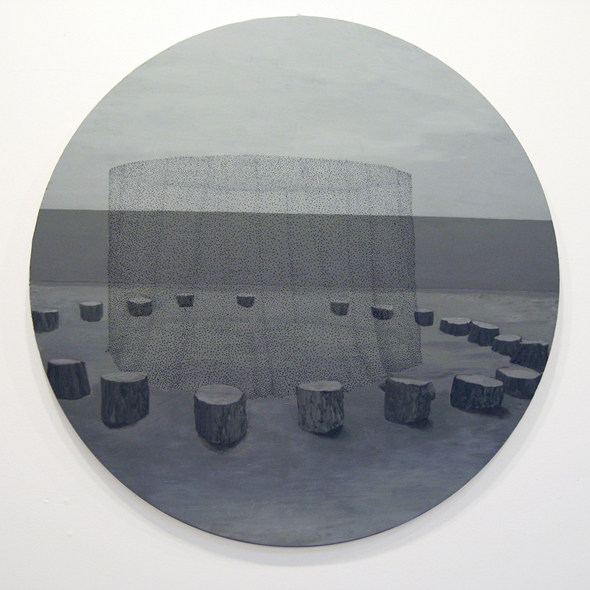 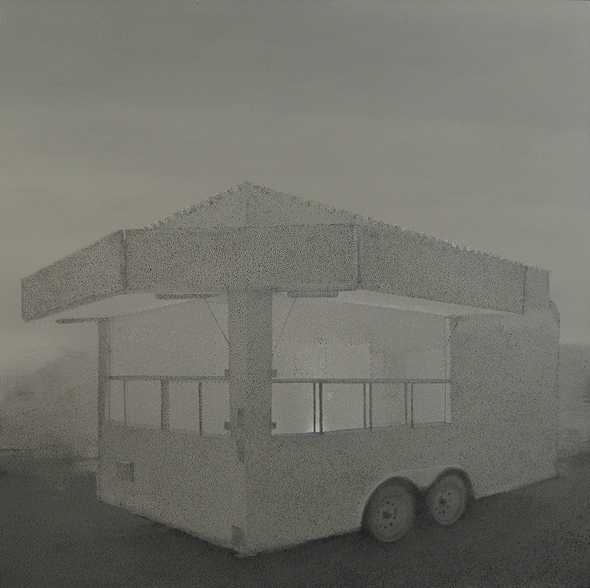 DEVON CARANICAS: Can you talk a little bit about the created space in “The Waters Fine” and the coerced interaction between person/person and person/artwork?

GRAYSON COX: In a conversation with artist Fia Backstrom about her last show Murray Guy Gallery, Fia was talking a lot about expressionism within a frame and relating that to Facebook. I thought a lot about how Facebook is super limiting but creates all kinds of expression and makes people feel a sense of freedom of expression even though the “frame” is so limited. With ‘The Water’s Fine’ I was really interested in creating spaces that were measured for groups of five or less. Five people groups being the threshold for a single conversation. If six or more people are in a group the conversation will always split into two or more. Of course it doesn’t mean that a group of five people will always share in a single conversation but it is at least possible. I hoped to show structures that are usually invisible within the social context of the gallery. I created a possibility for a greater level  of intimacy among strangers, performative behavior like dancing and killed some awkwardness. Through the oppression of the sculpture people felt a sense of freedom or whimsy. Of course the show operated a lot differently when a person entered alone. The show became a place where people could move with purpose from one space to another to see the wall sculptures. It was a much more ritualistic and introspective space then I think. 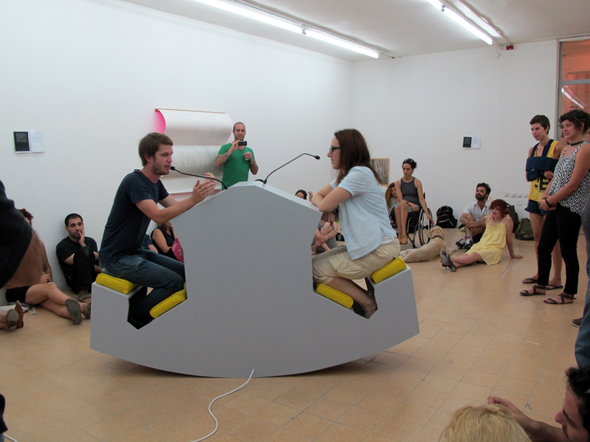 I know your training is in printmaking and I’m wondering how you transitioned into sculptural work.

With a printmaking background it’s really hard to make prints without a print shop because you need a lot of materials and presses. So I began making paintings and drawings but I wasn’t super skilled at producing things without a process. It seemed that process art was in my blood. In between graduate school and undergrad I was also producing sculptures for other artists. I first worked for a place called Spath Design which does all the christmas windows for Saks and Macy’s and I worked there producing moving sculptures.

Yeah, kinetic things. It was fun because it was kind of sculpting and also analytical carpentry.  I got a much better grasp on producing things really quickly under a lot of pressure. I picked up a lot of tricks. I started making things I had only been making drawing of before. I started with portable shrines that were really influenced by Mikoshi festivals in Tokyo. There they make portable shrines that they put on their shoulders and go through the community stopping at the temple to charge up the shrine. Then they take it through the community to share the charge. I was interested in the social and political parts of that. Where the portable shrine might stop, and is it political to stop at one business and not the other? I was making things that were ritualistic and I became interested in a kneeler – It was the first sculpture I ever made actually. 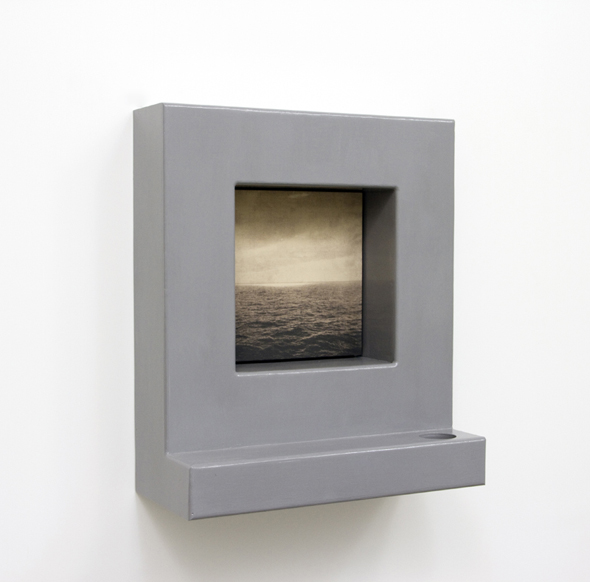 I know you also have a strong interest in ergonomic design.

I became interested in bodily control, coercion or facilitation. Ergonomic design was studied and implemented to increase comfort in the within sites of production but productivity is the obvious goal. Not as much for the health or wellness of the employee but to make them work longer. I started looking at a lot of ergonomic design structures and I really liked the kneeling aspect of the ergonomic kneeling chairs from Sweden in the 70’s. There was a sort of relinquishing of power that takes place with this almost devotional furniture. So, I made an ergonomic lectern, a single person one for speaking to a crowd. It rocks and has a fan and is designed for comfort to help put you at ease so you can better deliver a speech.

You just recently returned form a residency in Warsaw. How was that experience and what did you work on there?

I didn’t know what I was going to do when I got there but I’ve had this long running idea. I read a book , The Seven Story Mountain, It’s a spiritual autobiography and I loved the title of it. I had this idea to create a 9 story mountain – an actual mountain looking structure that is 9 stories tall. 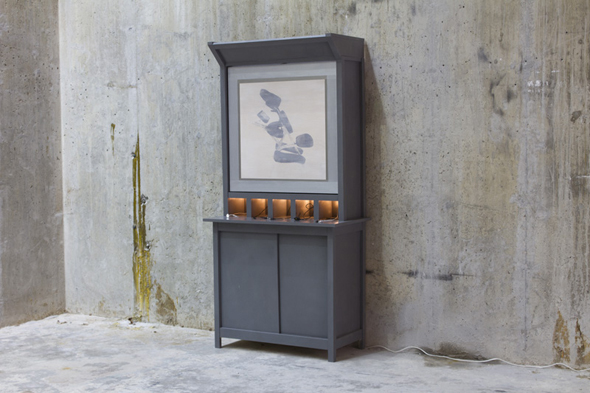 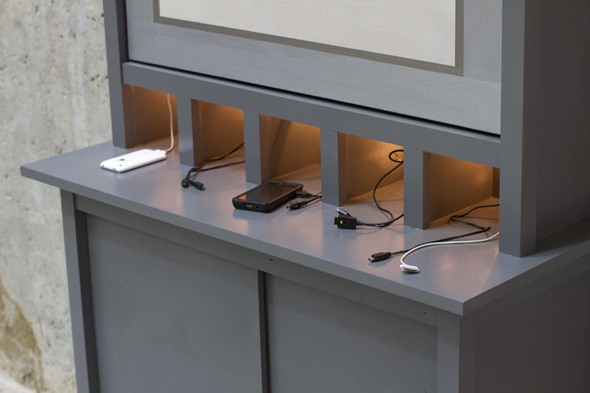 ….and impossible. It’s a totally out there project. But I was thinking I might as well try to build a version of this 9 story mountain and I made a half story mountain. So it’s 1.5 meters tall, and I made it with love seat built into it. Nature is kind of bending to us, or connecting in a way. It was a kind of familiar domestic Love seat like facility that referenced nature through its rock like shape and its wooden body. It had a feeling of futility for me, the sculptor, to try and mimic nature. I had a lot of fun trying though.

I also made a wooden crate that is an artwork that serves as a retirement fund. I invited everyone at the residency to put a piece in the crate. We sealed it for 10 years and the museum, the CCA in Warsaw, will take care of it for us. So in 10 years we will vote if we want to sell it or keep it in the collection accruing cultural capital. We called it the Pension Arc. Hopefully it will give us financial security someday when we are older and really need it. The art works inside are really amazing. And secret until purchased…

Are residencies important for you?

I prefer to work on my own actually. Sometimes they work out really well  like this one in Warsaw but other times there are expectation to really make a show for the public. For me that is kind of strange because I want a place to work on things and be able to fail. I’m just about to start the LMCC (Lower Manhattan Cultural Council) studio residency in Manhattan. I think it’s going to be great because it’s just about work – giving space to work- and it’s not overly structured. I’m pretty self motivated and would prefer to just be able to do whatever I want. 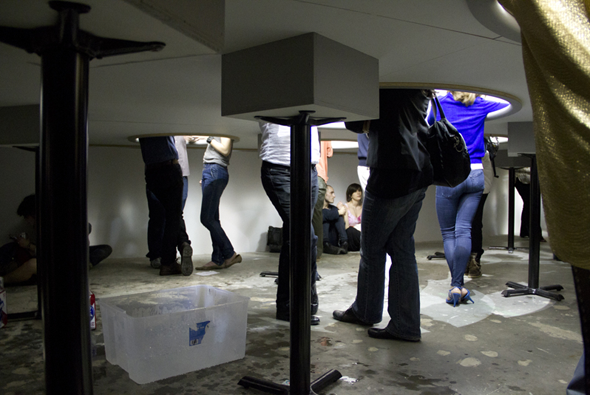 So besides your time at LMCC what do you have coming up for the rest of 2012?

I contributed a newly re-created sculpture of mine, Ergonomic Discussion Lectern to the Hudson Valley Center for Contemporary Art’s Peekskill Project in Peekskill,New York. My piece is in the museum in Peekskill for the next year as part of a show with some really great artists. Also, I’m currently working on a show with artist Pete Watts called I’m Loving It which will take place on October 28th in a McDonalds / Auto Zone / Staples parking lot. We have opened the show up to artists and curators who would like to confront the challenge of producing an art show in and around cars. Basically, they can organize a show in their car and drive it there. Sort of like an art fair structure where each gallery is responsible for it’s own curatorial mission. The show will consist of different galleries (cars) displaying solo or group shows on a Sunday night when the businesses are closed. We have some pretty interesting shows lined up and ready to drive over. 6-9pm Oct. 28th 652 Meeker Avenue, Brooklyn, NY, and many other projects in the works…..

Devon Caranicas is a visual artist and writer based in London. Originally from New York, Devon received her BA in Fine Arts from the University of Southern California in Los Angeles and is currently completing her MA in Visual Cultures at Goldsmiths, University of London. She has previously worked in education and programing at the Fisher Museum of Art in Los Angeles and as studio assistant for Berlin based Hannes Bend. Devon is regular contributor to Artslant, Artwednesday, Berlin Art Journal, and Berlin Art Link.
fotofloh.com
devoncaranicas.tumblr.com