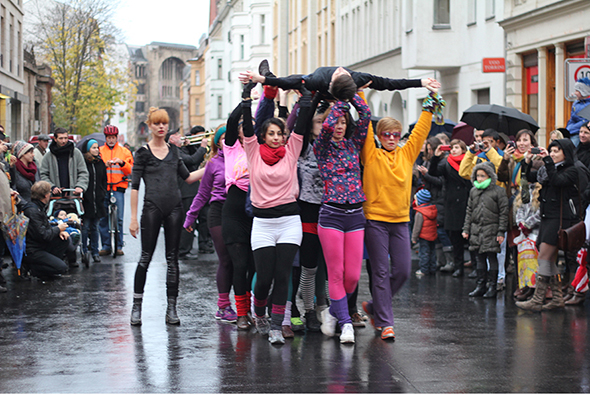 Amongst the drizzle of a gray Saturday afternoon, a crowd gathers in anticipation of a public parade orchestrated by Italian artist Marinella Senatore. It begins with a handful of tap dancers taking their first percussive steps; and soon after, Auguststraße is alive with gypsy carnival music provided by Berlin brass band IG-Blech. The procession saunters down the street, and at the helm is Senatore; directing her flock of performers from behind the camera in her Robben & Wientjes minivan, pushed along by the crew.

Interceptions to the standard parade spiel occur in the form of strategically placed performers. From a street-side playground, classical ballet dancers use the metal bars of the fence to perform a choreographed routine before uniting with the corpus. At an intersection, a group of 80s-clad girls perform a flash mob style contemporary dance routine. Performers of all experience-levels and demographics are absorbed in Senatore’s inclusionary practice; at once diverse, they are however united through their involvement in the parade, which is itself part of a larger project by the artist entitled ROSAS. 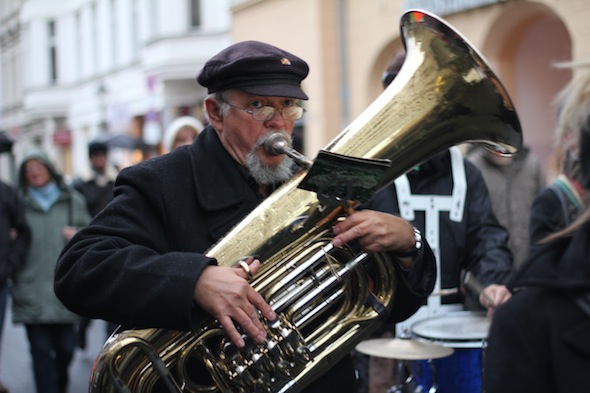 It is difficult to draw lines between artist, spectator and participant in Senatore’s work; it is possible to embody all three roles at once. The spontaneous nature of the parade thrust spectatorship upon locals caught unawares; indeed, watching the reactions of those craning over their apartment windows was one of the most enlivening elements of the performance. By the conclusion of the parade, the spectators and procession had become one large group revelling on the blocked street outside Peres Projects – the site of Senatore’s ROSAS, Part Two exhibition opening.

Marinella Senatore is an artist whose practice is to catalyse process. The participatory-based project ROSAS is the culmination of 20,000 people across three European cities coalesced under the direction of a singular goal: the filming of a trilogy of operas. As the head of such a project, it is difficult to frame all of Senatore’s activities solely under the label of ‘artist’. Much of Senatore’s time is filled with mobilizing various groups, providing and administering open spaces, workshops and equipment so people may have the opportunity to collaborate with both herself and each other. In the case of ROSAS, this meant facilitating travel for participants across the three locations to encourage a dialogue and consolidate social ties between those involved. 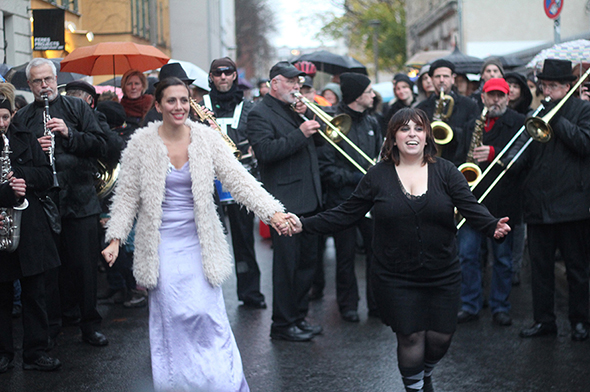 ROSAS – An Opera in Three Acts was screened for the first time in its entirety at Peres Projects on the occasion of the conclusion of the yearlong project. The trilogy is a conflation of real life workshop footage and fictitious dramatic scenes that rely heavily upon improvisation. While the jumps between reality and fiction provide some interesting parallels and insights, the editing of the trilogy can be, at times, jarring and perhaps not indicative of the polish suggested by the title of the work. Such is the case with living-and-breathing, temporal artworks that the documentation serves as a reminder of the experience, and not accurate rendering of the intent achieved and the atmosphere created. 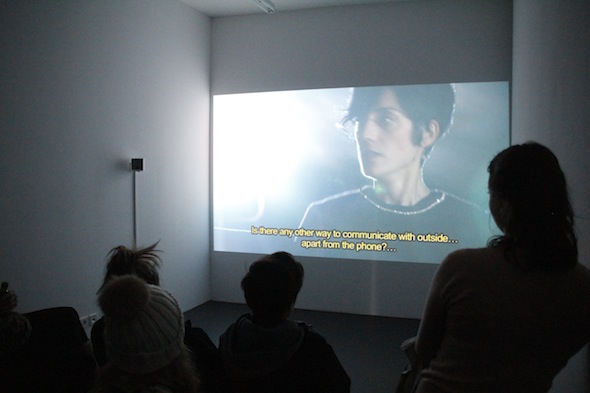 Aside from two television monitors that play video documentation of Senatore’s public performances (the Berlin parade included), the other major wing of the exhibition space is comprised of a large set reconstructed from the original space in Derby, England, where Chapter Two of the ROSAS was filmed. The space is a combination of an English attic and a dance studio complete with dance bars, mirrors and a fog machine. Members of the public are invited to make use of the space for their own projects throughout the course of the exhibition by scheduling a time with Peres Projects. Facilitating this set space for the free use of the community echoes what took place in England after the conclusion of filming ROSAS Chapter Two – Senatore gifted her set and technical equipment to the local residents.

The act of making these open spaces available is what has come to define the lasting impacts of Senatore’s work. Integrating communities through creative expression, dramaturgy and performance, she works to facilitate process and progress. Most importantly, she knits together a social fabric that stays tightly interlocked once the productions wraps. Save for documentation in videos and photographs, there is a remarkable vitality that remains with those who have experienced Senatore’s work – whether by accident or not. 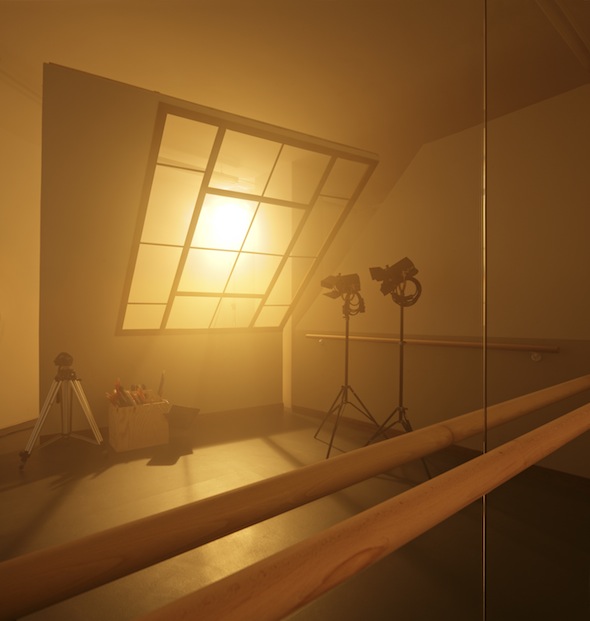 To request use of Senatore’s set during gallery hours contact rosas.project@gmail.com. Time slots will be allocated on a first come, first serve basis.

Melissa King is a writer and editor based in Berlin. Originally from Australia, she has studied Art History and Film at the University of Sydney, and UC Berkeley in California. melissalouiseking.tumblr.com