Following the flow of the Spree river, the urban landscape of Berlin transforms in the East of the city, growing desolate and industrial. Formerly a German bathhouse turned customs office during the GDR, the currently run-down Spree Studios are soon to be restructured into a more “people friendly” site: restaurants, shops, offices. In this transitional location can be found the studio of David Button. 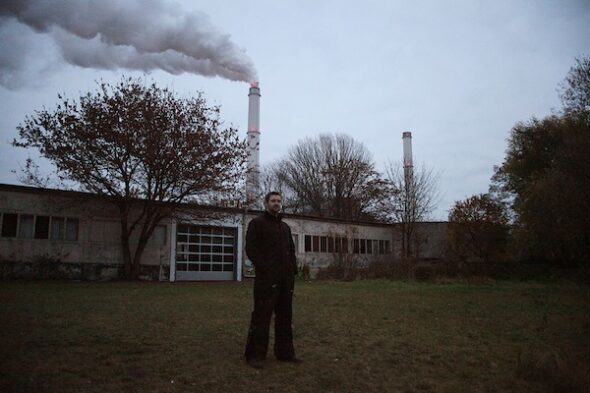 The studio is set up in a space suggestive of a storage garage. The large partitioned room is cold, and David explains that there is no heating. We keep our jackets on and he offers us tea. Standing in the first room of the studio, items immediately catch the eye: a black figure of steel rods and melted plastic; a horizontal, light grey door, in the centre of which is a crude hole bordered by yellow paint; overhead in a corner are branches bound by polyethylene.

The space holds the variety of work with a raw disorganization. Button’s various mediums of choice lie side by side, displaying projects of numerous scales and in stages of completion. In the back part of the room, aluminum sheets are stacked across from photographic collage pieces. This disorder is thematically bound by Button’s interest in what he calls “the flow of energy”: the process of transformation in physical matter. 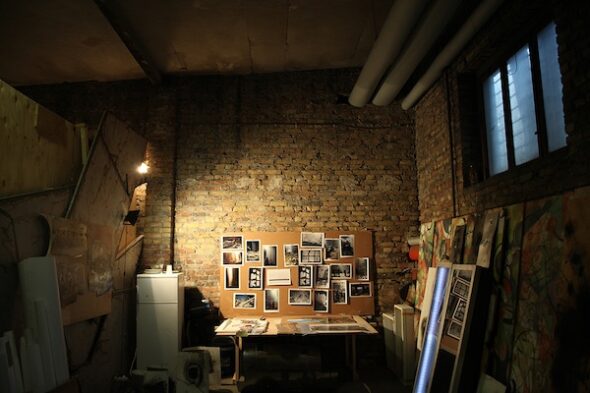 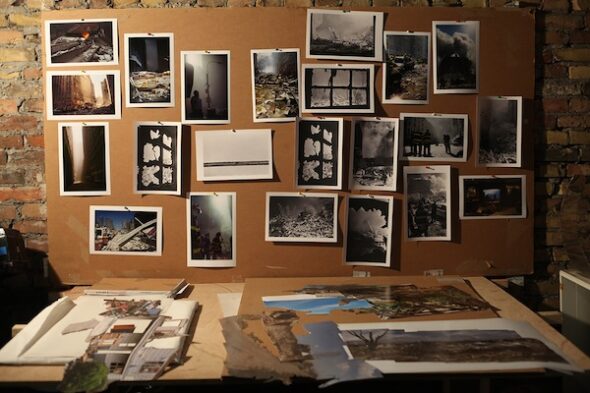 Button, who moved to Berlin from New York two and a half years earlier, works with an amalgamation of organic and man-made items, employing building techniques from his background as an architectural and designed-based “fabricator”. Structurally, the works may be considered to be playing with a controlled chaos. Notwithstanding the multitude of mediums, similarities can certainly be seen in the ways Button treats the materials of each project. There is always a combination of elements, at times in a very basic, chemical sense. 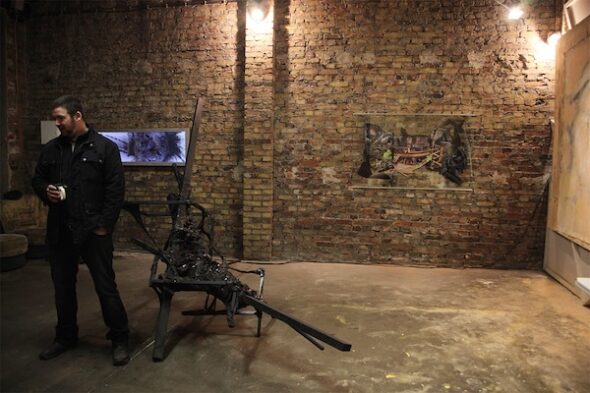 In the “Oxidation Reduction” series, Button lights iron-based thermite with a magnesium fuse over various sheets of metal. The reactions demonstrate an unstoppable, destructive chemical property, but also an organic quality found in the inanimate objects: the thermite destroys the metal it is placed on, resulting in distinct tears and circular formations. The two sculptural pieces are made with comparable methods: the initial parts — be they branches or steel rods — are joined through polyethylene. Though Button is orchestrating the project, he simultaneously admits that at a certain point, he ceases to be in control. This occurs with the form the polyethylene takes, the manner in which in which it melts over the other parts. It is this melting that specifically interests the artist, as it reveals again the physical transformations as well as the organic forms taken by inorganic artifacts.

The theme is instilled in the photographic work as well. Capturing his subjects – abandoned mills, old hospitals, the wreckage left by storms – Button meticulously scans the locations with his camera and stitches together hundreds of photos to recreate the original site. But he believes this considered, photographic method is not enough to genuinely recreate the natural degradation and disarray of the locations he focuses on. Rather, the images are broken down again, cut up, replaced – each collage is unique and spontaneous, coming together based on the natural lines already offered in the architecture of the images. 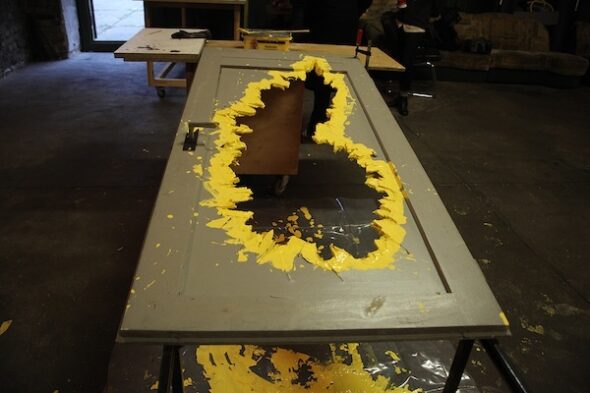 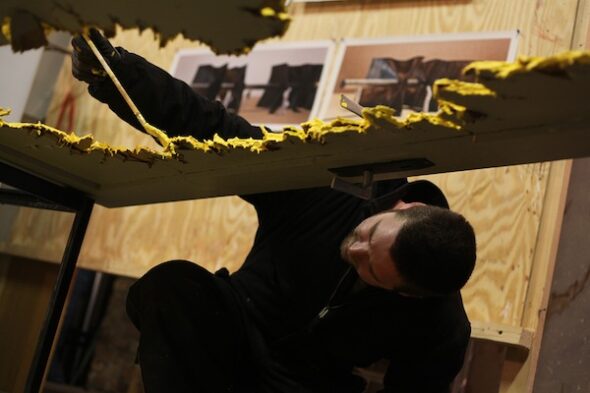 Button’s future work intends to follow the current interest in forces and pathways of energy. While waiting to obtain further thermite, the artist has broken through a door with an axe, exploring the relations between objects of use and blank canvases, of the decontextualization and reinterpretation of common forms. As Button showed us around the space outside of his studio, steam piled out of the smokestacks behind him as the sun set on the remnants of the GDR’s Spreepark across the way. The site itself seems to work as an intersection between past and future purposiveness, a perfect setting for Button’s studio.

Natasha Klimenko is a writer and artist living in Berlin. Originally from Canada, she received a BA in Cultural Theory and History from the University of King’s College, Halifax. Currently, Natasha is working as an art journalist, a photographer, and an independent film-maker. Rian Davidson is a Canadian intermedia artist with a focus in sound composition, film and performance. He currently is living and working in Berlin as a gallery assistant and videographer.