Freischwimmer, Kazue Taguchi’s solo show at Lorch+Seidel Contemporary presents several works made of mylar spirals suspended from the ceiling, curves glued on the wall, and rings. The mylar, or Polyethylene terephthalate, also called PET, used by Taguchi is aluminized by evaporating a thin film of metal onto it to reduce its permeability, which makes it reflective and opaque. The mylar reflects moving lights onto the wall, creating very fine patterns of luminescent strokes. The volatile shapes and abstract patterns explore the ethereal effects of light and reflection, and recreate the sublime we experience in nature. 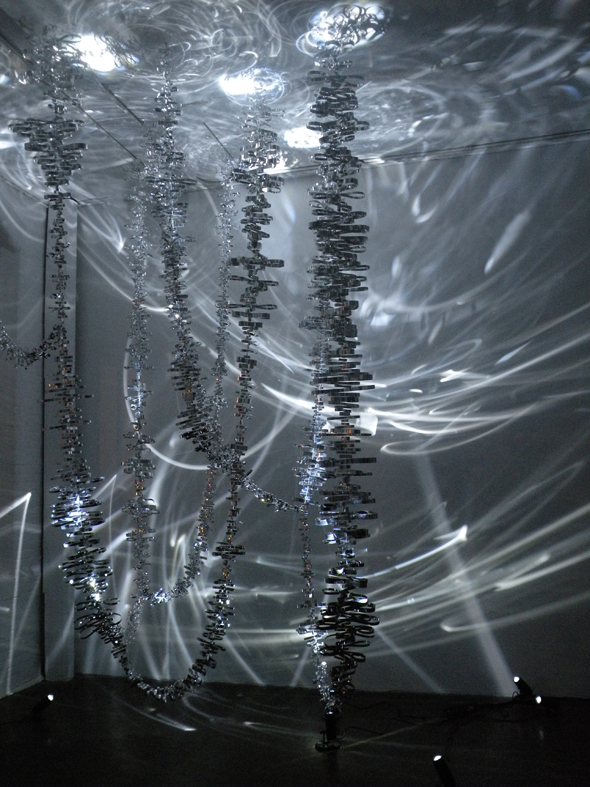 Taguchi’s two main influences are the cherry blossom, an integral part of Japanese culture, and the stain glass of the Gothic cathedrals in Europe. Taguchi lived in Spain where she experimented with glass before using reflective materials like mylar. Having lived in Japan, I have experienced the cherry blossom, or Sakura season, and enjoyed their contemplation; the Hanami.

The Japanese go through that time surrounded by the Sakuras. In Ueno park, or along the Tokyo rivers, for instance, we are immersed in that bright universe. We look up and turn around, lifting up our cameras or mobile phones to immortalize the surrounding beauty. At night, the Sakuras are reflected on various surfaces like ponds by the moonlight. After the full blossom, the petals start falling and it is raining petals everywhere as they are blown away by the wind. 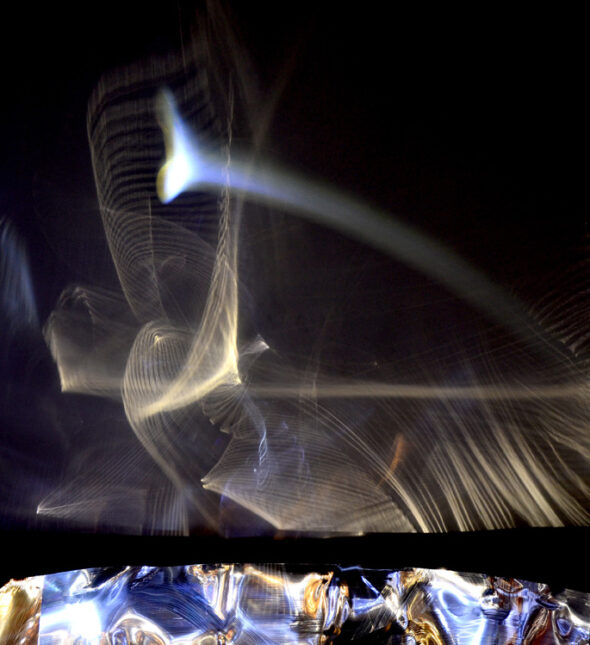 Both the Hanami and the gothic churches share the contemplation they generate. In Taguchi’s installation, we find ourselves contemplating almost in a religious way, as if we were in communion with nature. We let the environment absorb us, talk to us. We feel as if we were under water, or in space. Aquatic silvery elements, as if they were x-rays of fish, are passing by and surrounding us. The ephemeral and elemental shapes appearing on the walls have something both aquatic and celestial, like a moonlight reflected on water. The spirals suspended from the ceiling, are sewed by Taguchi twice; first with a sewing machine then again by hand. Their shapes evoke the infinite symbol; the infinite where they are taking us.