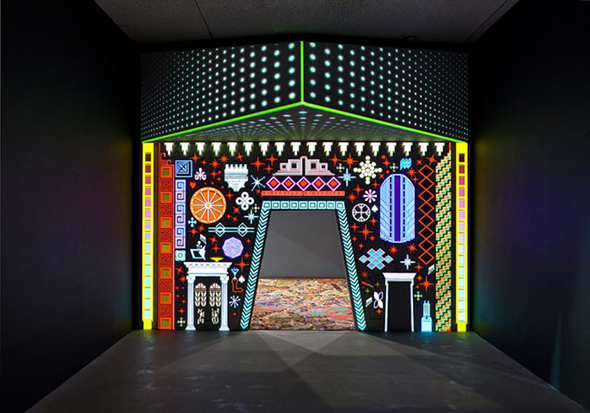 Although currently based on the west coat, visual artist Cayetano Ferrer spent many of his formative years in Las Vegas, a metropolitan anomaly that continues to be a subject source for much of his work. Ferrer’s visual fascination with the city began as a teenager barring witness to the demolition of casinos along the strip.

The Las Vegas real estate market has a proclivity for constantly reinventing itself. Spurred on by economic surges and the active imagination of hotel developers, the reconstruction of the infamous “strip” is hyperactive to say the least. For Cayetano, this resulting architectural mosaic has become symbolic of the regenerative and cinematic narratives that the city embodies. Working with video, sculpture and installation, Ferrer uses demolition footage, scrolling marquees and glowing signs in an ongoing and ever expanding exploration of a social and psychological rational behind explosion-as-spectacle that exists in the west. 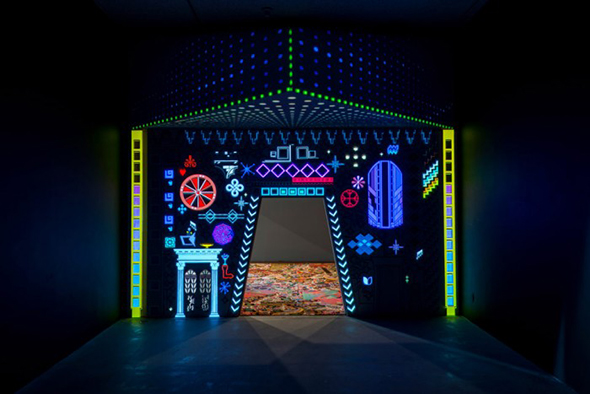 Recently shown at the Los Angeles Municipal Gallery (which was part of a much larger exhibition titled “Made in LA”, the inaugural biennial of Los Angeles artists organized by the Hammer Museum and LAXART) Ferrer explored these architectural tropes while simultaneously utilizing a very different visually schizophrenic icon: the casino carpet. Swatch for Remnant Recomposition was created by affixing different geometric fragments to develop a wall-to-wall carpet composed of oddly juxtaposed culturally coded icons. These mass produced textiles are easily recognized for their flamboyant and intricate designs, while the imagery and symbols embedded into casino carpets are often appropriated from various times and cultures. When combined by Ferrer the final product results in a conglomeration of contradicting and disparate meanings.

This flattened composition is a mimicry of the city’s previously mentioned haphazard architectural make up. But it also points to our contemporary way of consuming conflicting and converging information, such as on the internet. I met with Ferrer at his studio in Los Angeles to discuss his current projects and recent “Made in LA” exhibition and the following interview took place via email:

DEVON CARANICAS: Surface, veneer and illusion seem to be recurring themes in your work. What specifically attracts you to these notions?

CAYETANO FERRER: I’d say that these are recurring themes in the western tradition of visual art, if not central to the problem. The Renaissance is filled with examples of trompe l’oeil painting which was that period’s version of the various kinds of augmented reality that we have today. The effect was perfected into the Baroque period and was maintained a presence until you arrive at places like Caesar’s Palace. Special effects in cinema came along with a knowledge of centuries of illusionistic work in theater, and even the apparatus of the camera and the projector has its roots in these illusionistic techniques.

My work ends up being the result of the question: what exactly is an illusion? Is everything we see on a screen or a printed photograph an illusion? Is culture implicated in illusion? Can language itself be an illusion? I think language could definitely be considered in relation to this concept of illusion and this might render the word “illusion” itself a fabricated concept. The most effective illusions have weight to them. They are tangible and concrete, just as our gaze into reality is often distorted by artificial mirages. I think its interesting to consider that the word “real” didn’t come along until well after landscape painting became popular in the 16th century. 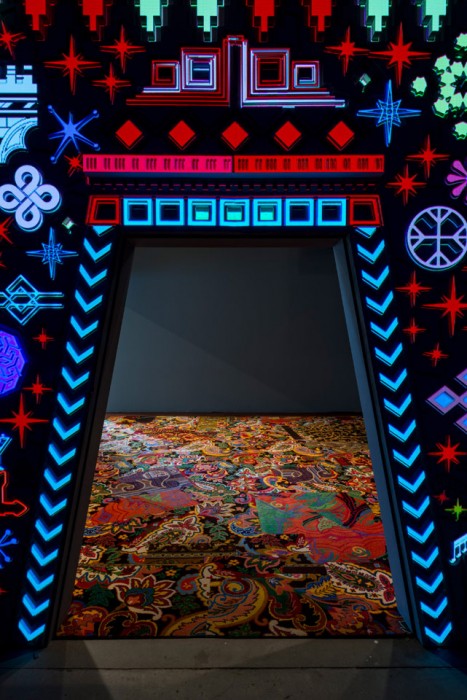 You’ve worked with casino carpets in the past to catalogue them into a “field guide.” How has the significance of this imagery evolved for you?

Casinos are basically noisy colorful labyrinths and the carpets play a crucial role in this. The basic order of shape and color here is organized in a way to affect how your body moves, and if you look at it on a formal level this is a really powerful experiment. Pathways are inlaid into the graphics of the carpet but they seduce you in certain directions towards a state of disorientation more than showing you the way to anything specific. The paths might seem to be taking you an exit, but actually draw you in circles through the gaming floor and to the spectacular shopping labyrinths. So we have this situation where aesthetics are sort of guiding movement in these subtle ways.

More recently I started looking at this imagery more closely, and I started feeling it was closer to mythology than outright deception. Something as dense with content as these carpets have fragments of ideas that amount to some sort of absurd myth, but I sincerely believe this myth is sort of crucial to understanding important parts of a global human condition. So I started on this equally absurd path to study of these fragments. 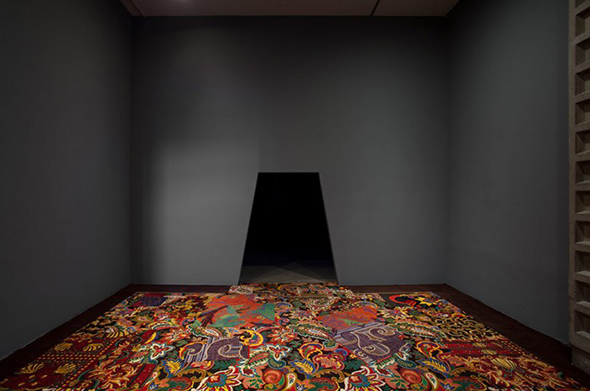 Even with these deceptive objects which are designed with a visual strategy that specifically asks me, the pedestrian, not to read into its meaning, there are plenty of speculations to be made into their mythological roots. This is most readily visible in the designs that reference the past and I choose to believe that even if these motifs are changed and flattened that these various visual elements that can be recognized are reaching into a deeper meaning. Corporate design on this scale integrates so much market research that our desires are finding their way into these places, and I’m privately trying to embody these spaces to better understand these desires. All of these effects are created to stimulate sensations and memories, and even if the designer is just a carrier of this myth there is some semblance of tradition taking place. In a way this is our new tradition. The internet works this way too and I see these lossy operations in Vegas as a physical kind of proto-internet, with hyperlinks and compression artifacts everywhere you look.

Show in tandem with Swatch for Remnant Recomposition was Quarter Scale Grand Entrance, a flashing casino facade that the viewer had to walk through in order to access the carpet. Obviously the pieces work as an installation, but I’m curious how, and if, they function on their own for you?

I try to avoid the word installation to describe these things because they were conceived as something closer to a model or a swatch. It comes from this larger project of designing a casino where each element is sort of infused with local history. Where the city always had this obsession to appropriate culture far away from its own, I wanted to use elements of its dying vernacular to put the lens on its own history. Its a pneumonic device on an architectural scale for an amnesiac city. Someone told me about this pneumonic device where one tries to hold onto a memory by imagining an object that represents this memory and then putting that object into an imaginary building. You carry the object up the stairs and into the room in a meaningful place where you want store this idea, like on display on a shelf or a hidden in a drawer. This theoretical casino works on a similar level, a kind of computer model to store memories. 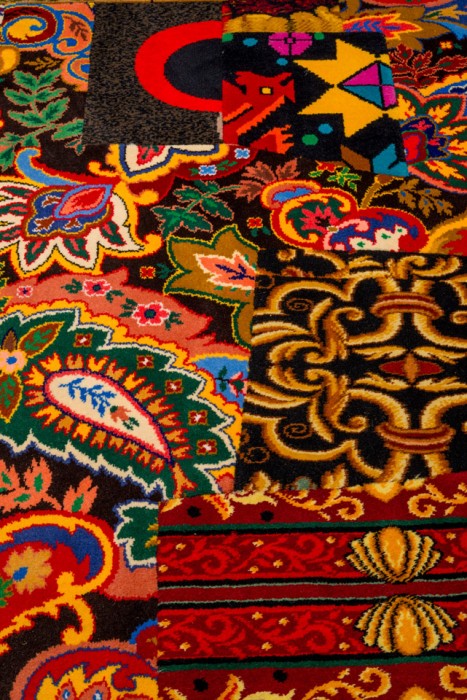 So with this in mind the two works are definitely connected, but they are adjacent models working on different scales. The Grand Entrance is a design for the façade of the main entrance of this casino from the street. Working with this idea of Vegas as this index of the past I wanted to use elements from the various cultures already brought into this index and then put them all in one place. The result is a relief sculpture that channels through the pastiche of other casinos into the origins: Ancient Greece, Egypt, Medieval Europe, Renaissance Venice, turn-of-the century Paris, Aztec, Navajo, etc. The whole wall was then animated with projectors.

Remnant Recomposition was in progress for a couple years as I collected carpet scraps, which they call remnants in the fabric trade. I talked about this before but these cutoffs represent a powerful historical record stored in the patterns, and placing them all together it creates a matrix of contradiction and similarity. As a pedestrian is passing through this threshold, they are passing into a timeless space, not a space with no history as Las Vegas is often described. It’s a sort of convergence of many historical traditions into one location so it deals with time and location in a similar way as the wall. 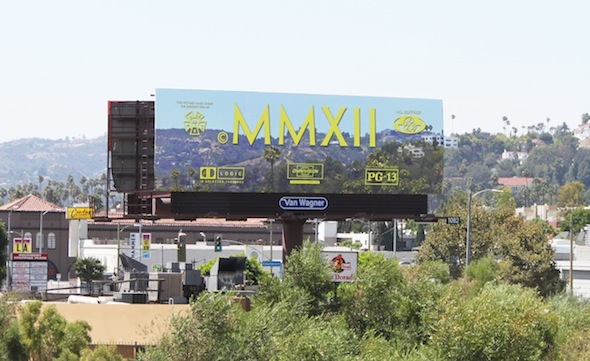 In conjunction with the show organized by the Hammer Museum at the Los Angeles Municipal Gallery you were able to install a tromp de l’oeil billboard on Hollywood Blvd. Can you talk a bit about its conception and relation to the work shown interiorly?

The billboard goes down a separate line in my work but there are definitely relationships. Both lines are deeply affected by context and a few dominant aesthetic forms that rose into their own categories in the American West: cinema, and thematic architecture, and signs. I see themed architecture as a direct descendent of cinema, borrowing from set building techniques to create sculptural simulations of architecture.

So in a way with the billboard I’m just following this casino design back to cinema. I was thinking about the old painted movie backdrops but of course the landscape around Los Angeles has also always been a backdrop for film, ported to look like different locations. So I wanted to make something that made use of the billboard to integrate these layers of representation and history, and then shoot a film in a way where these layers draw a line that points back to the camera. Since it would also be seen from the street the billboard is something between an advertisement and the last frame of a credit sequence of a movie. These end credit graphics are superimposed over an image of the Hollywood Hills behind it and in the film the billboard installers put the sign up and reveal these end credits so the movie just becomes about its own ending.

Devon Caranicas is a visual artist and writer based in London. Originally from New York, Devon received her BA in Fine Arts from the University of Southern California in Los Angeles and is currently completing her MA in Visual Cultures at Goldsmiths, University of London. She has previously worked in education and programing at the Fisher Museum of Art in Los Angeles and as studio assistant for Berlin based Hannes Bend. Devon is regular contributor to Artslant, Artwednesday, Berlin Art Journal, and Berlin Art Link.
fotofloh.com
devoncaranicas.tumblr.com