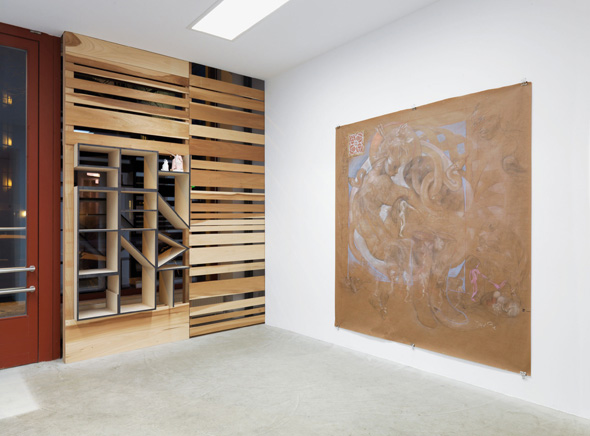 The show is introduced to viewers with a steel structure embedded in the wall that cryptically spells out the title of the exhibition Schön und Gut. The title, which translates to beautiful and good, reflects the superficial and overplayed ideology, what is beautiful is good and what is beautiful is desired. On the wall adjacent, is a large pencil drawing loaded with macabre imagery of demonic signifiers and symbolisms. This medley of delicate pencil renderings of demented and hybrid creatures interwoven with text is repeated throughout the exhibition and performs like a dark ballad, weaving its notes of death, nostalgia and supernatural themes. 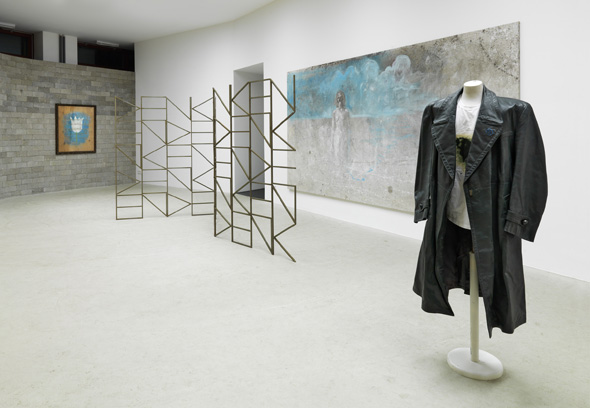 The largest exhibition space resembles an up-market glamour-meets-grunge store with its eclectic collection of sporadically placed objects. These objects, hidden or resting on shelves containing the words “HAH” and “AHA” include tied dyed “PANIKEARTH” bags, a small world globe, a white mould of two hands in the prayer position, a conch shell, patchwork leather pants, a single grey t-shirt on a hanger and a white mould of a bearded man’s face resting on one hand. In front of the shelves is a headless mannequin dressed in a t-shirt and long black leather jacket. Together, these articles turn the space into a treasure trove of Bell’s personal belongings, manufacturing a gloriously dark and stylized persona for the artist. 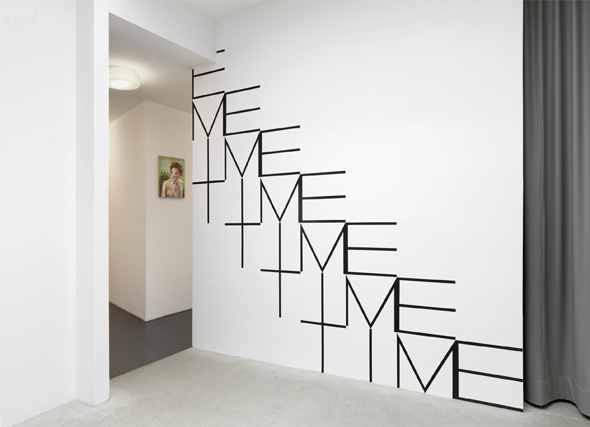 The interplay and repetition of words play a reoccurring role in Bell’s works and form a thread throughout Schön und Gut. Words are hidden within words, and Bell deliberately manipulates and anchors the viewer in the space to unravel the linguistic puzzle that he has constructed. Dividing up the main space with the repeated words, “DENKEN” (think) and “ENDE” (end) is a large steel minimalist sculpture. In a smaller room the viewer enters a contemporary eternity where eleven multi-coloured blocks spell out the words in three possible combinations: “WARTEZIMMER” (waiting room), “WARTENIMMER” (always waiting) or “WARTENIMMER” (never wait). Wandering into another room “TIME” is diagonally repeated down a wall, and can be read in different directions. The letters are displayed so that the word “ME” is particularly apparent; “ME” the central focus of “TIME”. Spelt backwards, “TIME” spells “EMIT”. Additionally, in the display mode that Bell has chosen, the “I” and the “T” together fabricate a religious cross.

There are many unhinged and replayed theological and philosophical statements that Bell makes during this exhibition. His sophisticated placement of objects, the collaboration between pictorial and text, and his ability to conjure up narratives that remain unsolved make his works fodder for lingering thought. The result is an exhibition full of personality, where I am not sure whether I am looking into Bell’s past, present or future. 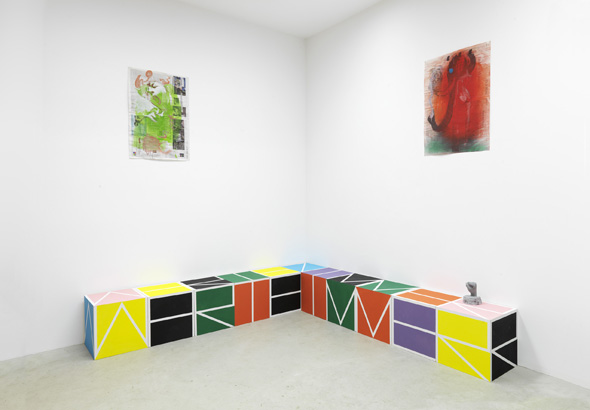