If you haven’t already heard of the band Jiga Eva Masumi, you soon will. Already, the distinctive style of the band has quickly grabbed the attention of the international art and music scenes. In addition to their recent tour of Israel, they are scooping up key gigs with the likes of legendary artist Yoko Ono and being asked to perform at this year’s Berlinale Director’s Lounge.

Formed in 2011, the band was originally made up of German-born Eva and Israel-born Jiga from Analog Pussy; a psychedelic trance group which has played live all over the world and released five albums. While searching for someone to translate their debut single “Hey, Yoko Ono” into Japanese they met Tokyo-born Masumi from the band CruxPark. This melding of different languages and artistic backgrounds has produced a unique and provocative authorship.

Berlin Art Link talks to Jiga Eva Masumi on the eve of their “Hey, Yoko Ono” single being performed with Yoko Ono at the Volksbühne, Berlin. 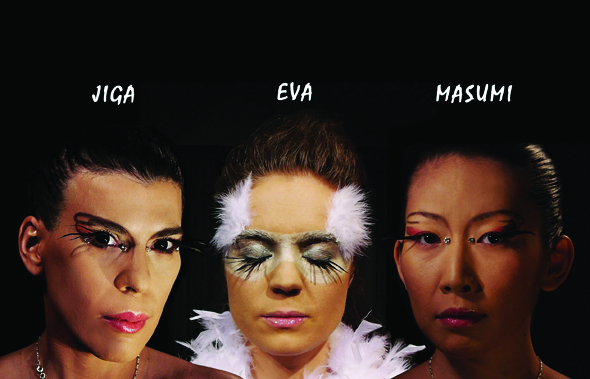 Eva, You first established yourself as a visual artist, exhibiting all over the world including the United States, Japan, South America and Europe. What do you see are the connections between your visual and music practice?

Eva: Music has always been one of my interests, but for a long time I felt I have no access to it. For the last two years I taught myself drums and sound modules and jammed together with Jiga from Analog Pussy in rehearsal rooms around Berlin.

There is no obvious connection between my art practice and the music, but I find that the different fields of arts are interconnected, and that is very attractive to me. For some of my previous video installations I collaborated with other musicians such as Mika Vaino. 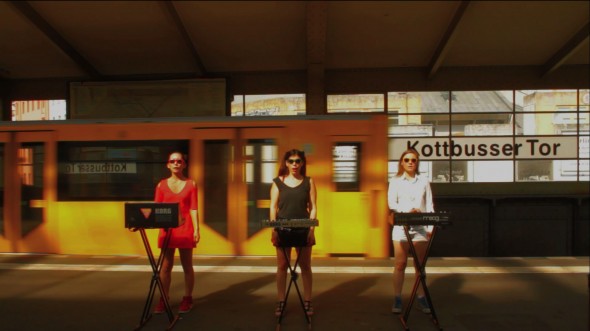 “Hey,Yoko Ono” is your first single. Can you tell me what the song is about?

Eva: One of the lines says: “Hey Yoko Ono, Reflect the mirror hidden in your heart, Sense my beat with eyes ears and bare skin, Unstoppable impulse shaking the earth.”

We just wrote it as it is, in one morning at the studio. We just created it and we loved it!

How did the song get to be performed with Yoko Ono?

Eva: Yoko heard the song “Hey Yoko Ono” and was moved by it. She invited us to her birthday party last year in NYC. It was too short of notice so we couldn’t make it. This year she invited us to perform with her on stage, as simple as that!

The songs are sung in Japanese, English and German. Is there any reason for singing in different languages?

Jiga: Singing in a language that isn’t your native is magical for us. It’s virgin territory and it makes the brain think about words in a different way. I find it more playful and creative to sing in a language you do not normally speak.

Eva: For the “Hey, Yoko Ono” song, we always jammed on the baseline in Japanese using all the words we knew in that language. From “Yoko Ono” to the Japanese food menu. In the final lyrics we just kept Yoko Ono in.

Your music is very performance based, can you describe your style or what you are trying to communicate in the way that you present your videos?

Jiga: It is fun to make music videos and play different rolls. We love it. It’s a little bit like acting and transforming into something else. For example in one of our videos Eva was playing a Trapeze artist and she took Trapeze lessons in order to look convincing.

Eva: Yeah, I had some serious leg cramps after the first lessons. It was worth it. 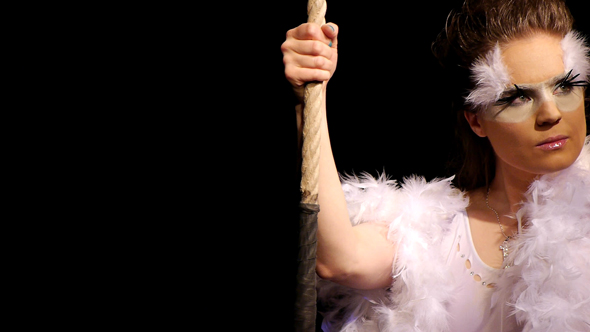