Tucked away on an unsuspecting street in Wedding are the windows of what appears to be a shop in disuse. Behind their half-closed blinds lies a small working space. The pleasant smell of sawdust and wood rises from the studio, immediately bringing to mind images of worked materials. In the middle of the room rests a large, elevated board, stopped in progress. Surrounding it are other similar pieces–plywood boards disfigured and painted. Hidden under and behind desks are more sculptures, made of leather and clay. 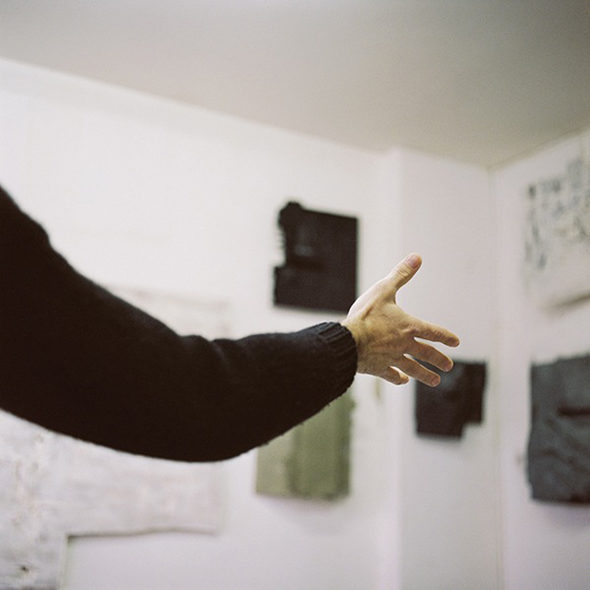 Every surface in the studio of Konstantino Dregos seems to have something on it: books, papers, materials, tools. Every surface provides continuous evidence of a flux of creativity. A sculptor, visual artist, musician, and philosopher hailing from Athens, Greece, Dregos has been living in Berlin for the past three years and has used the city’s physical construction as both inspiration and medium in his current project. 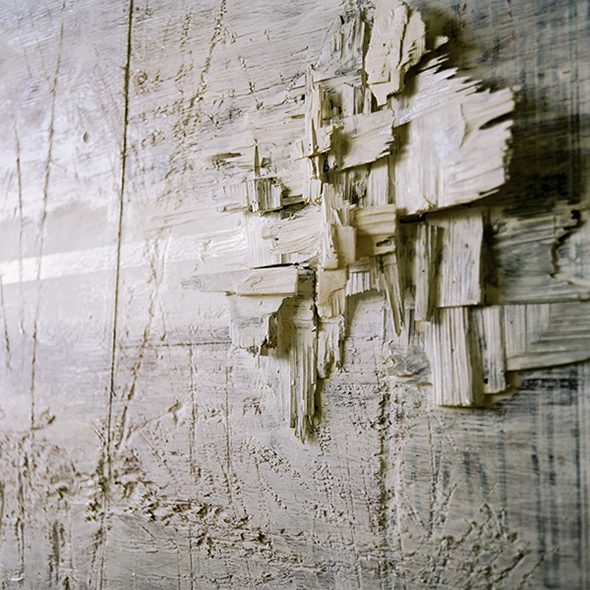 Already speaking perfect Deutsch, Konstantio moves between German and English as he explains his current work, entitled Chamber Plates. Removing baseboards from the framing of the pre-foundations of houses, Dregos deconstructs and reconstructs his pieces; chiseling, cutting, sawing, and dividing them, largely with self-fabricated tools. The results, his almost elemental plates, often take on earthly tones: grey-blues, burnt oranges, olive greens, deep sepias. Dregos suggests that each colour has its own identity, volume, and mass, and becomes a relevant part of the created form–rather than merely a material used in the activity of painting. 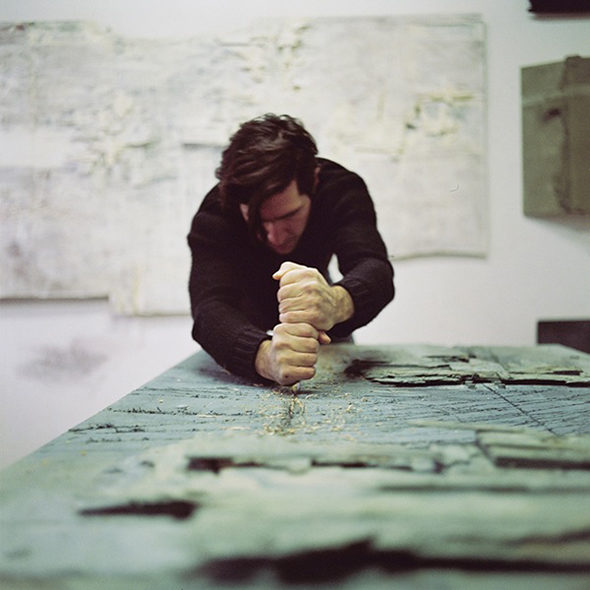 Though the artist tells us he feels more comfortable with hands-on, physical work, his academic background shows clearly through almost every aspect of our conversation. He speaks of the Chamber Plates process, which he calls “unfold, break, penetrate,” as being the “ripping off the skin of a foundation”–literally, of the building site, but also metaphorically, of Western Civilization. This process and theme had its start in 2009, when Dregos first arrived in Berlin, with an installation called Ruinventions. 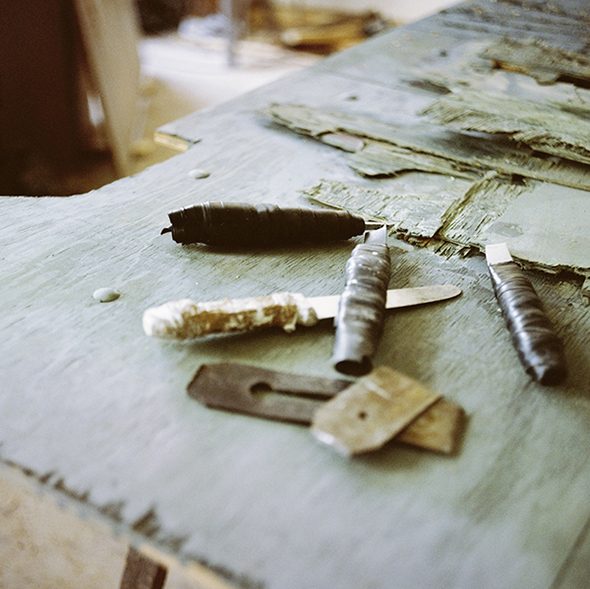 Coming from the Greek depression, he was strongly influenced by seeing the signs of urban geographical growth and economic development in Berlin. Similarly, the expected familiarity with Grecian ruins persists in Dregos, who has been accustomed to a proliferation of classical ruins since his childhood in Athens. Rather than seeing the ruin as something ruined, as an end, Dregos is interested in redefining or reinventing (“or ruinventing”) it as a site from which something may blossom, out of which new ideas, movements, and processes may arise. Here, Dregos plays with the linearity or progression of time, showing moments of reversal, but also of the inertia of time, of the relations between creation and collapse. As he puts it, it is about returning into the past and seeing “sameness.” 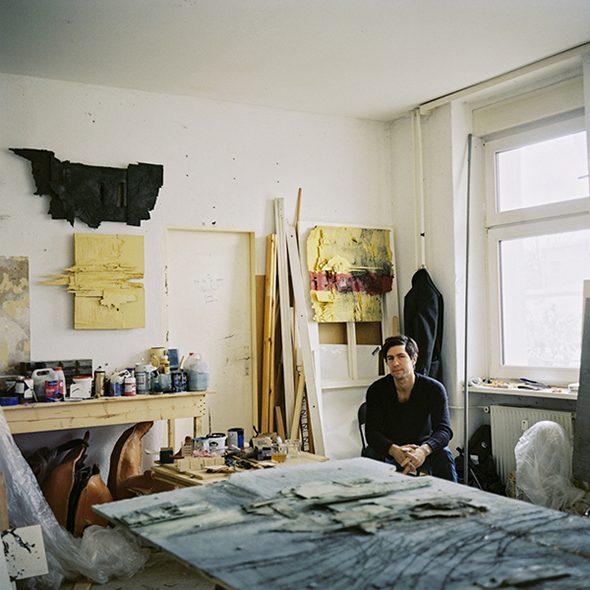 When asked whether this intellectual context is necessary for those perceiving the art works, Dregos responds that he actually cannot talk about his work, but he can talk about its surroundings, placing the ideas not so far from the physical part. He suggested that the art exists in itself as an inhabitant, surrounded by space, which changes all the time. That is to say, again following Dregos’ speech, the viewer or artist comes to the work dragging memories behind them, and these memories, experiences, all that is dragged, these things are thrown at the artwork, creating a space which it then inhabits. The artwork thus sits in the centre of the surroundings, but becomes almost untouchable. 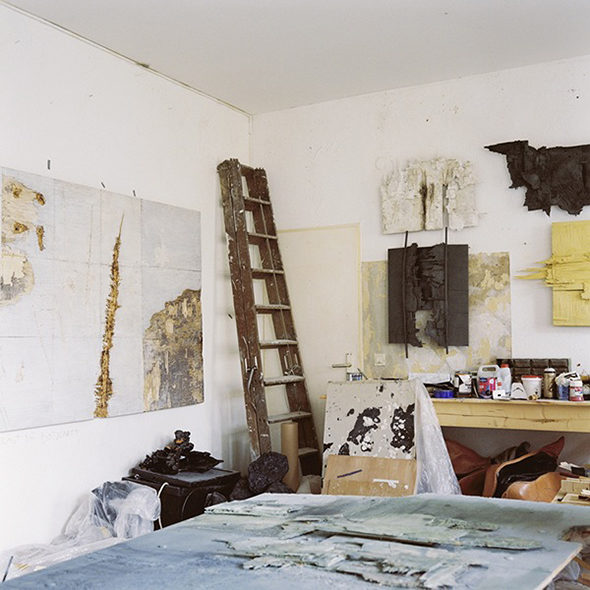 This was a snippet of an intensive 90-minute discussion, which seemed to rise up and away from the physicality of the art world and into the realm of ideas. But unlike the Platonic dialectic, this process of going up and down the line of thought was always brought back to the physical creations–shadows of the world, and of thought, but also gateways into it. Near the end of the visit, we were given perhaps the finest opposition to the highly cerebral conversation that ensued. Dregos demonstrated his physical process, bending over the piece of wood in the centre of the room with a crudely made carving tool and dragging the tool down the board, showing how much force is required for such a simple marking. What one might have thought to be an effortless process was surprisingly demanding, and in some ways almost brutal and animalistic. 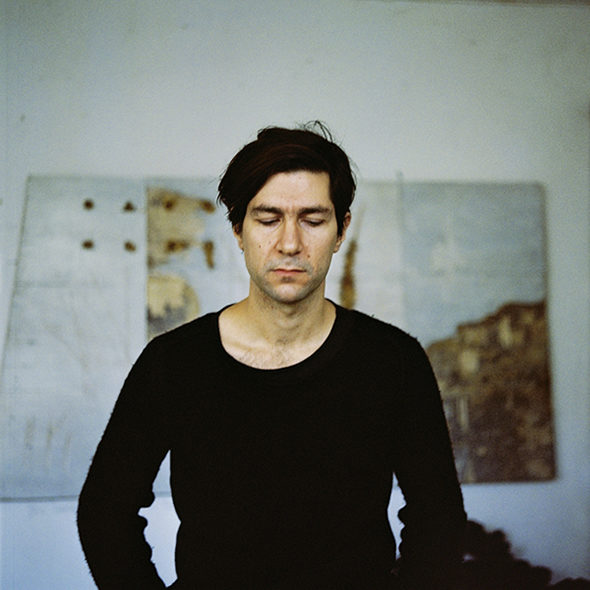 Dregos joked and said that if he were to commit a murder, he would do it with his hands, that he would never be one to poison a drink. Considering that he had started the visit with tea, this was certainly good to hear. But beyond the joke, the intention was clear–in his actual process of destruction and creation, the passivity of ideas was halted, and the physical world and its force came through.

Natasha Klimenko is a Canadian writer and artist currently living and working in Berlin, where she is producing written, photographic, and cinematographic work.