Located in the centre of Mitte, up several flights of stairs and overlooking Rosenthaler Staße, we met with Irish artist Aoife Collins to uncover the temporary premise for where she is currently working on three bodies of work. Neatly compartmentalized into separate areas, Collins’ works are set in an environment that resembles an office with its fluorescent lighting and grey carpeting. Stacked in one corner, multiple clear plastic boxes of lifestyle magazines reveal Collins love for fashion and design, as well as order. 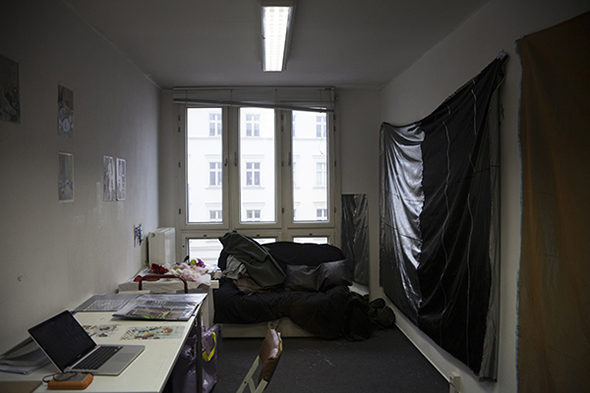 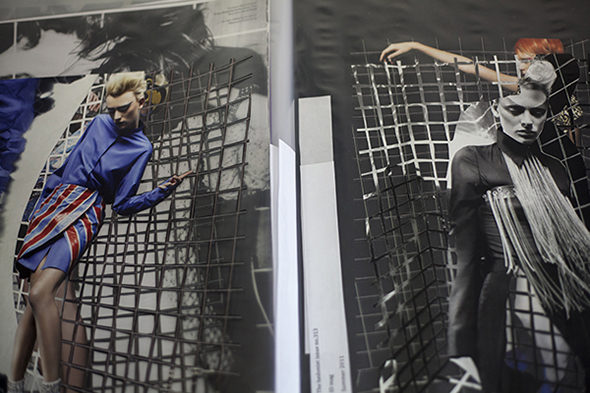 Despite the office shell and the gloomy winter light, the studio is laden with punctuations of colourful objects: tones of blue and orange material drape from the walls and vibrant synthetic flowers glow with hues both from the natural and artificial world. On the left hand side above Collins worktable is a series of contemporary fashion and lifestyle magazine pages that have been pinned to the wall. These pages, which Collins has chosen for their aspirational quality, have been delicately sliced with a scalpel into small grid-like patterns that then result in a laced, veiled or caged appearance. 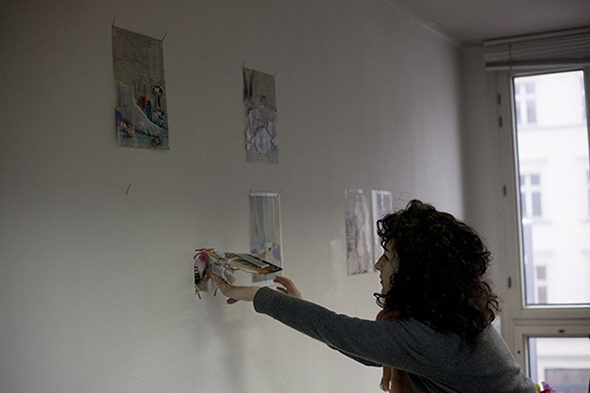 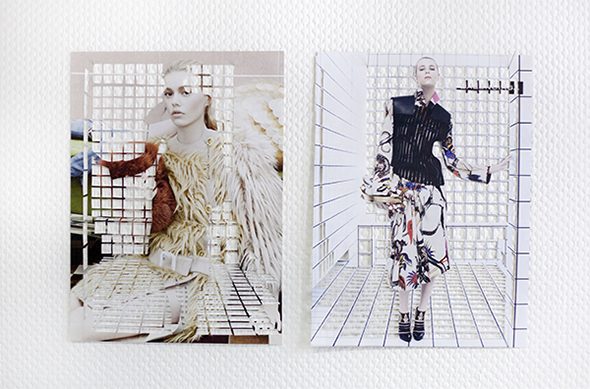 Collins’ is an adaptable artist, working across sculptural installation, photography, collage and sound. Her work begins with a ready-made material, object or image and then develops through the use of simple repetitive interventions. Crafted in a subtle way, her practice relies and utilises the viewer’s recognition of these objects as a starting point to critique concepts of fashion, consumerism, mass identification and representation. It is from this point that things start to go awry, catching the viewer pleasantly off guard.

On a worktable, near the only window, is Collins artificial flower series that was inspired by French writer Joris-Karl Huysmans novel, “Against Nature”. Similar to Huysman, Collins preference is for the artificial rather than the natural in her work, favoring synthetic orchids for their natural plastic appearance. Collins arduously shreds these mass-produced flowers thread by thread, until they are nothing more than an assemblage of filament. She then refashions the flowers, thread by thread to form new configurations. Each strand of flower will be used to form these new structures, nothing lost and nothing gained, with the end result after persevering detail, a metamorphosis of identity. These arresting and complex bouquets are then placed in vases and presented as sculptural pieces. 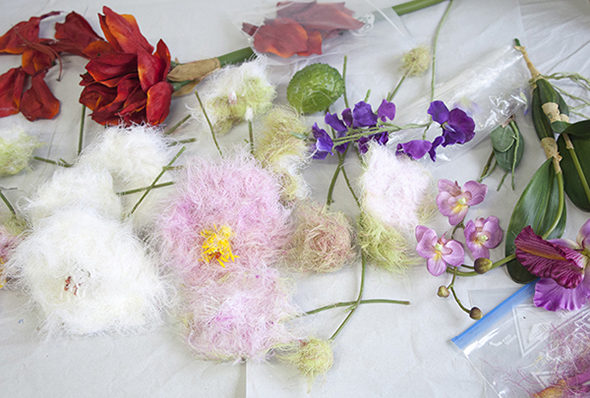 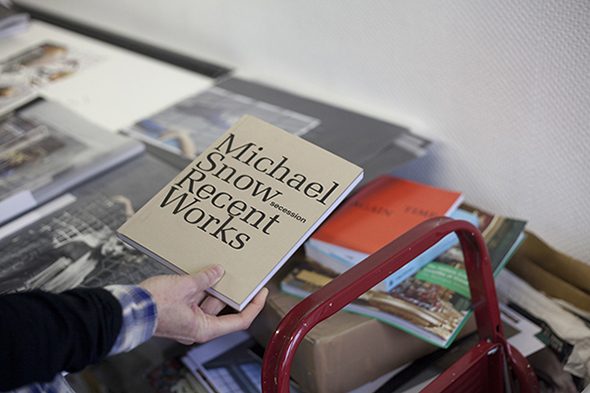 Collins works are fastidiously labored and can take up to six months to complete a single piece. Many of her works rely on associated meanings dissolving and the function of the object changing, or as Collins likes to call it, “role-playing”. She states that, “through the reconstructions, they don’t contain the same representational quality they once had, but become more weed-like or deformed”. This permutation that the flowers witness, questions the boundaries and shifting of cultural identities; of how minimal gestures by an artist can transform low-brow objects into high brow objects and disrupt the trajectory from factory to home to landfill.

On the opposite wall are large, shiny pieces of black, blue and orange fabric pieces that Collins refers to as “monochromatic paintings”. For this series Collins collects fabrics that contain one colour on the horizontal and one colour on the vertical (or one on the weave and one on the weft). She then pulls out sections, either vertically or horizontally, thread by thread with tweezers and a needle, so that the viewer can see the overall colour construction of the works. These narrow geometric strips are immensely hypnotic in their methodical approach. Through colour and texture, these pieces explore the poetic qualities of abstract forms and produce a tranquil cosmos, inviting the viewer to get lost in the fabric. 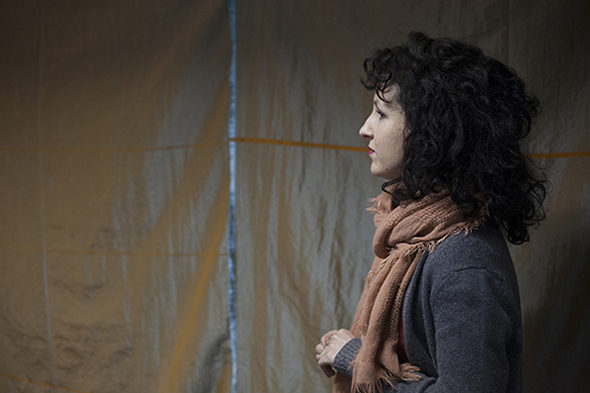 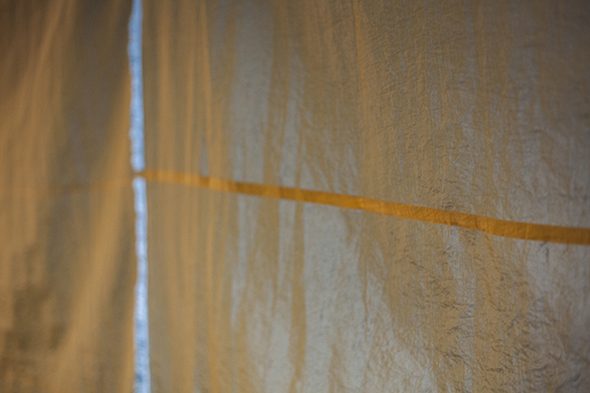 Collins is softly spoken and her answers to our questions are well considered, indicative of the thought and attention to detail that comes from her practice. From her artificial flowers, monochromatic fabric pieces and magazine paper-cuts, Collins work produces results that are simultaneously bizarre and beautiful. As she meticulously goes through her practice object by object, carefully explaining the process, it’s hard not to notice the fragility and intricacy in each of her works. They are elegant and carefully arranged, and there is an immediate sense of aesthetic appreciation from being in Collins studio. Her approach to art making is an intersection between art, fashion, and design, and produces unexpected ways of thinking about common household articles. 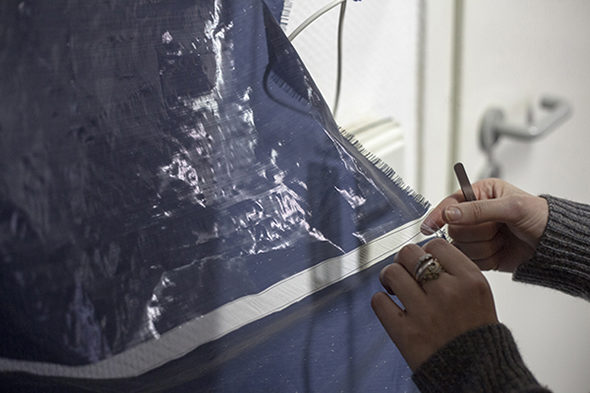 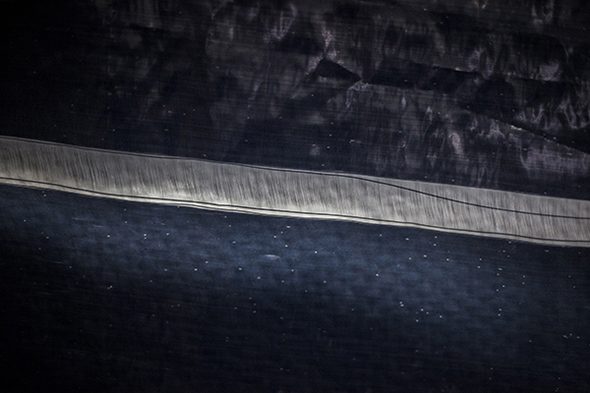 Artist Statement: My current work revolves around appropriated commonplace mass-produced objects and images that have been altered, manipulated or copied. The works focus on fragmentation and destruction, the to-ing and fro-ing between the definite and infinite. Close attention is given to the ability of objects to role-play. This use of role-play or mutability, away from intended functionality, is an attempt to open up the realm of possibility or potentiality of the objects and materials explored. A great deal of the work consists of re-assemblage; form and function are not considered final but rather can be altered and are open to the suggestion of permutations. My practice looks towards a form of breakdown or collapse with the images or associated meanings melting away. Notions of background and foreground or an exploration of the dominant and submissive image on a simultaneous picture plane are themes that are approached. 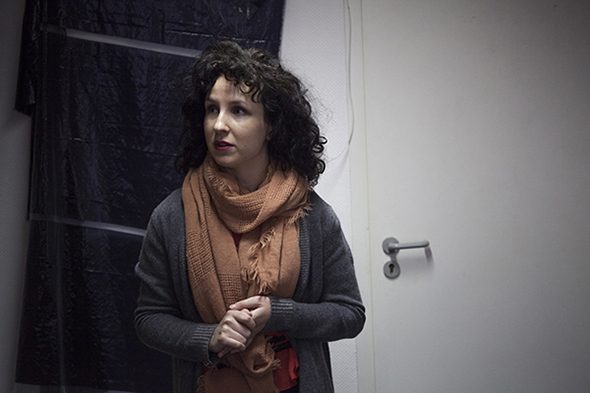 I am interested in the transience and mutability of objects, ideas and public personas, especially the filtering down from ‘highbrow’ to popular culture and the inherent changes of form and meaning which occur in these circumstances. In summation appropriation and repetition are themes that consistently run through different works. I have an interdisciplinary practice and am fascinated by how history, culture and fashion collide and the multitude of different strategies of communication. My work looks to the navigation of our cultural landscape, how cultural paraphernalia, and ideas are disseminated and resonate with wide audiences. I am also interested in the form or sets of aesthetics these cultural trajectories take or manifest.

Rian Davidson is a Canadian intermedia artist with a focus in sound composition, film and performance. He currently is living and working in Berlin as a gallery assistant and videographer.