Historically, painting has a very long lineage ranging from early cave drawings to Abstract Expressionism and Magic Realism. In the process of having a relevant, provocative and cerebral dialogue with painting, one must consider what has been done before, along with his or her own experiences, interests, spatial concerns, aesthetic likes, and dislikes.

Angel Otero is an artist currently dividing time between Brooklyn and Chicago. Originally born in Puerto Rico, he attended School of the Art Institute of Chicago (BFA 2007, MFA 2009) and was picked up early in his career by Chicago and Berlin based gallery Kavi Gupta. He is also represented by Lehmann Maupin in New York. I recently visited Otero in his Brooklyn studio after we met briefly in Miami at an opening held at the Rubell Family Collection. He had a solo exhibition in Milan at Brand New Gallery from November 22nd – December 22nd, 2012, and came to my attention by way of Fabrizio Affronti, the Brand New Gallery director. 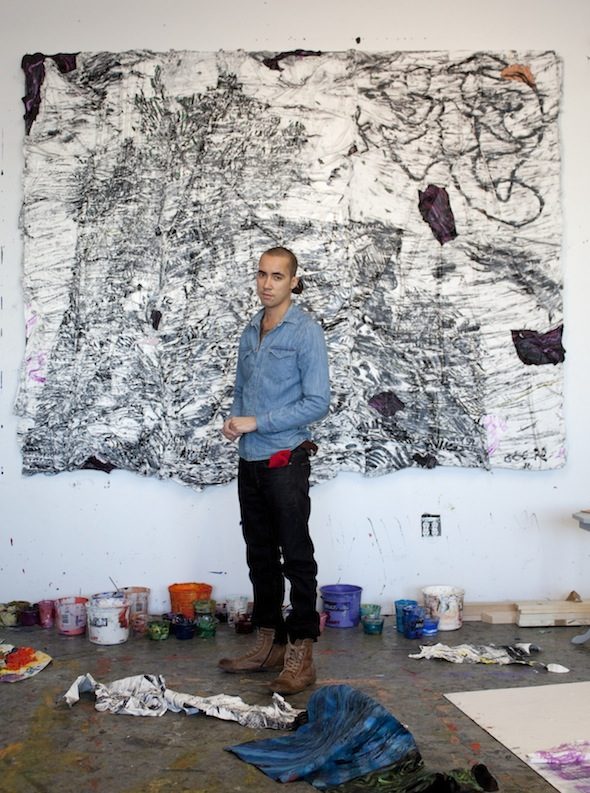 What Otero has done is find a way to have an exchange with both painting and sculpture, resulting in an object that can hang, flush on the wall. Always having an interest in sculpture, he was trained as a painter and arrived at his current technique and process after peeling paint off of a Plexiglas palette. How Otero works has been inspired by this simple action, yet he has pushed the envelope along with the scale to arrive at the body of work that has attracted attention. It was an honor to be walked through the studio along with Monica Salazar of Berlin Art Link. Angel gave us a play by play of his approach, commencing with a large-scale, representational oil painting on Plexiglas installed on the wall. He has built a platform and steps to be able to fully access the breadth of the painting. 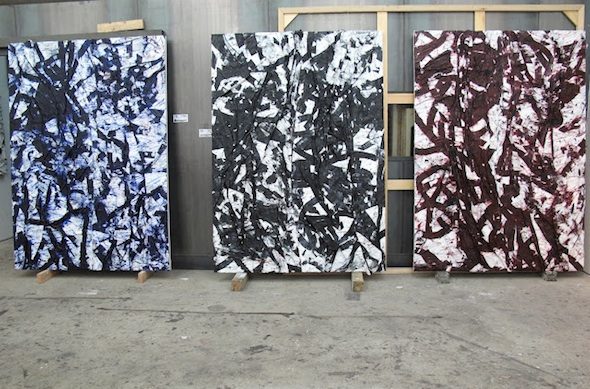 In his recent body of work he has interpreted many of the early paintings by Nicolas Poussin (French 1594–1665). For those familiar with Otero’s work, it might come as a shock to realize that his contemporary abstract paintings originate by way of figuration and in this particular case, visual translation of ornate, narrative paintings made during the period of the French Baroque. Each painting is reproduced in full on Plexiglas and then stored in racks for a drying process that lasts several months. Once the work is somewhat dry, it is scraped off the Plexiglas ‘like a pizza’, slid onto canvas and adhered with a glue medium. Taking a large-scale painting and attaching it to a smaller canvas, allows the artist to use the excess ‘painting’ to mold at will, forming wrinkles, waves, and even unplanned imperfections that all result in the final work. Since oil paint has a prolonged drying time, many of the works remain wet just below the surface even after they’ve been transferred to canvas. As an example, Otero lifted a small section of the paint, peeling back to reveal a still wet patch of black under-painting. Each instance is completely different. The original reproduction varies in subject, color, and form resulting in the peeled version to differ on every occasion. Once recognizing that the process included the deconstruction of the figure, I found myself observing the paintings a bit closer, looking for signs of humanity, a finger, a face, part of an outfit. However, no such proof of the original was to be found. Instead, the paintings ripple over the surface, an invisible wind having frozen the forms on their rectangular ground. 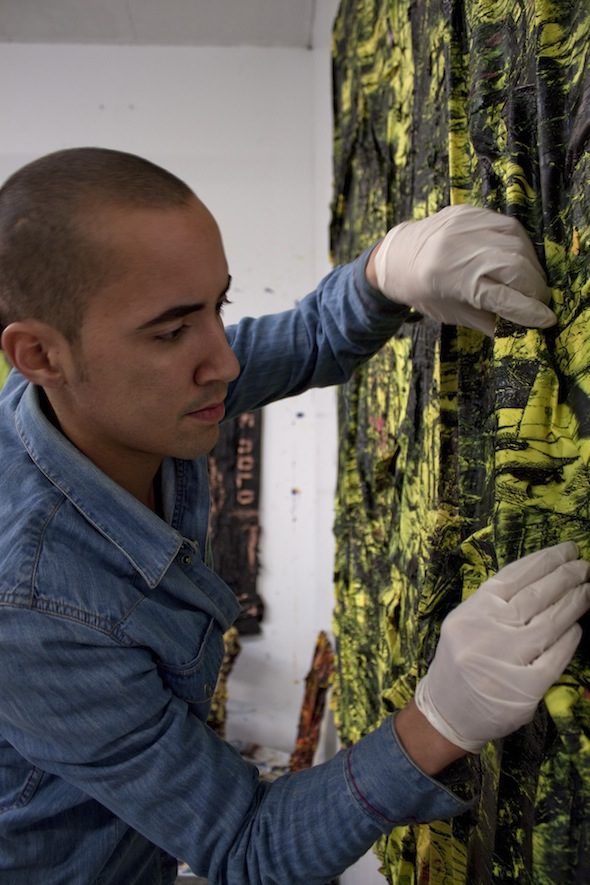 As the works fold and curl into themselves a non-didactic resonance becomes the focal point, whereas paint is the subject. Lush and broad brushstrokes fill the surface area with confusion. The paintings almost become objects in the vain of Abstract Expressionism, the works are less about the hand and human presence and more about happenstance while also containing elements that are in fact purposeful. Making a painting in the traditional sense, that is then peeled away and re-adhered embodies and carries a new intent. Similar to the practice of formal sculpture, Otero makes work that have a presence within the long-standing dialogue extracted regarding contemporary painting, while communicating with the past. The work has a way of remaining organic as there are moments of very subtle changes that can occur even as the paint goes through the long, arduous process of drying. Within the context of the final molding and affixing the painted surface to the canvas, Otero clearly states that he has an awareness and acceptance of the flaws that equal what the consequential work will be. Titles of various works arrive from books, not necessarily related to the image and by way of the artists interest and study of Cy Twombly, Poussain and mythology. 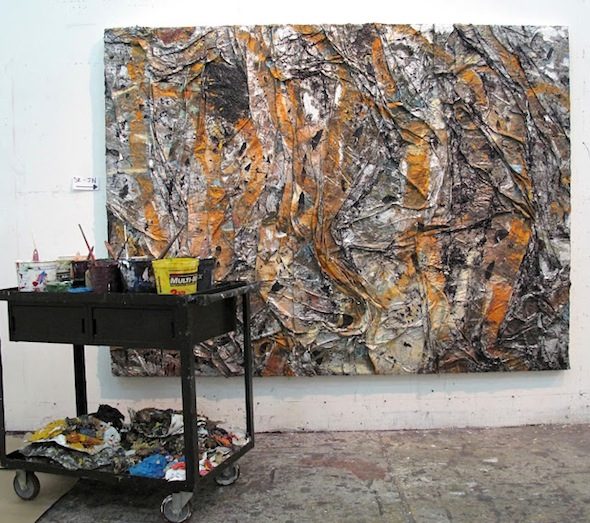 Another important part of his practice is free-standing sculpture. Extracting influence and inspiration from his middle class upbringing in Puerto Rico, Otero pulls from memories of domesticity and his family, merging the two with an explorative interest in various mediums. As an example, he has made a series of sculptures inspired by the wrought iron fence from a childhood balcony intermixed with elements of porcelain that liken them to a traditional pattern one might find in a china cabinet of an older neighbor or relative, in this case, white ground with a traditional cobalt blue. These works appear in various sizes, but stand as caged pillars, a conceptual monument to the past. In constructing his work, Otero states, “Decisions are made and not from point A to point B but rather to pose questions along with the possibility of material exploration. [The work] lends itself to non-conventional use of materials.” 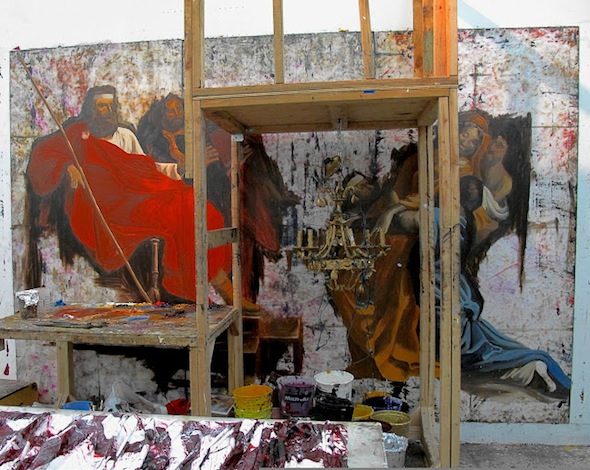 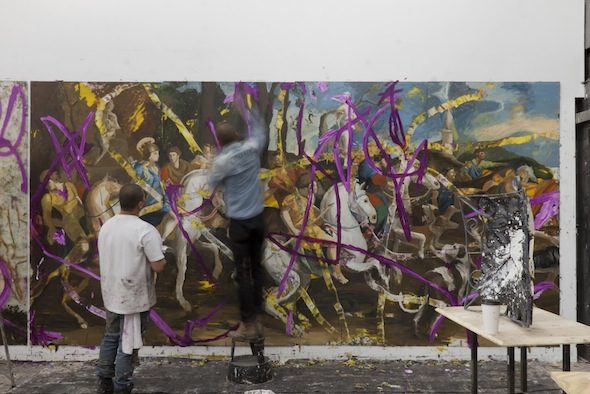 Otero’s work seems to deal with the very personal commentary that we all have regarding past, present and future conquests. In making his work he deals with ghosts and then removes all semiotic traces in order to arrive at a finished painting and or sculpture. In the realm of contemporary painting, he is one to watch as his process evolves, paint interacts within the confines of surface-area and visual vulnerability and relevance of haunted moments are plucked from the past and transformed in a new and unrecognizable way.

This article was originally posted on eyes-towards-the-dove.com

Katy Diamond Hamer is an Art Writer and Artist based in Brooklyn, New York. For more of her writing visit eyes-towards-the-dove.com