Tucked away on the top level of a massive GDR architectural gem near Alexanderplatz, the studio of artist Despina Stokou greets us with the anticipated smell of turpentine and signature bright colors. Canvases two persons high line the space, magazine confetti coats the floor, and any sign of the outside world just barely slips through a slice of window not covered by artworks. There are three large tables, concealed by everything from cut out letters to pornographic clippings to glue sticks. Walls, if you can find them, are covered in splatters of paint and outlines of previous leaning paintings. It is as if one of Despina’s pieces was shaken all over the place, scattering the various elements of a painting over every surface. But instead of chaos, the space is filled with a certain energy perfectly suited to Despina and her artworks. 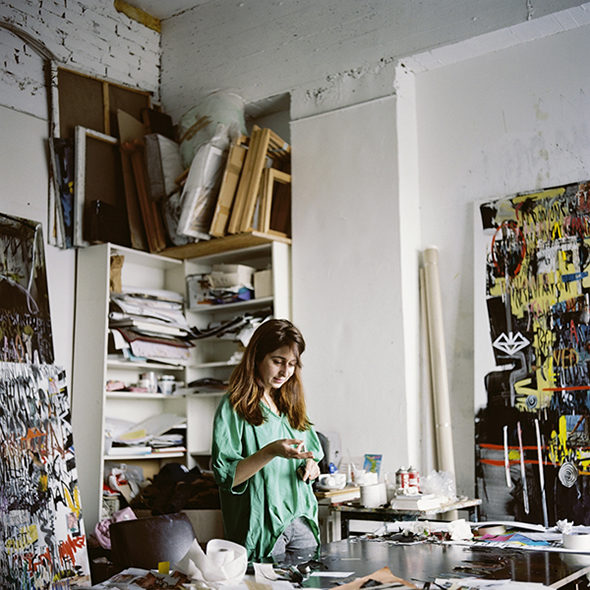 Layered with oil paint, cut out letters forming lists or sentences, markings of pastel and pen, Despina Stokou’s works arouse a jumble of reactions and associations. A bit of canvas left raw and exposed offers a sigh of relief, while scratch marks hint at desperation in the artist’s hand, moving back and forth between addition and subtraction. As compositions harmonizing color, text, images and ideas, Despina’s works beckon first to be felt, then (if you have time) understood. 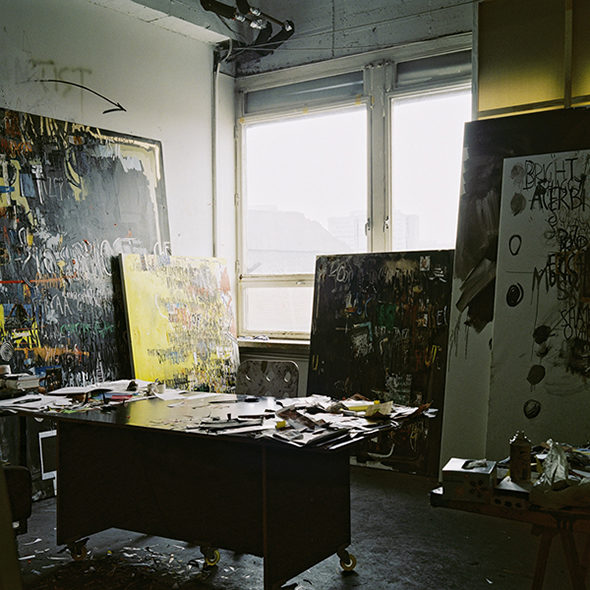 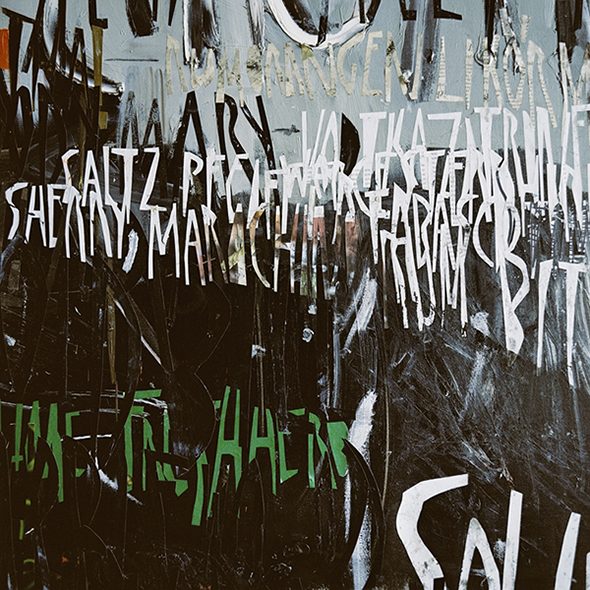 Despina laughs, admitting her previous show was “too much maybe… too much information, nobody has that much time”, something that is definitely of concern right now for the artist. Not having the time to eat, she heads directly to the mini-fridge to grab a yogurt. With a show in New York already this year and three more in the works for 2013, Despina has been busy. The next show “Delusions of Grandeur” opens later this month in Berlin during Gallery Weekend. Jumping right into explaining it, Despina seamlessly arranges canvases four times her size, leaning them against the wall, stacking one upon the other. An adaptation of a Martin Creed work in New York, she clarifies. In allowing edges to peak from behind, lines of colors appear that mimic the same color pattern in 5 of Martin Creed’s wall stripes in the staircase of Hauser & Wirth; a new gallery space on 18th street. But Creed’s are minimalist strips of color. Stokou’s are stacked canvases. It strikes me that she is not merely inspired by Creed, but reversely, exploring what color choice and canvas placement imply in the context of inspiration. This creates a dialogue not only between two artworks but also points toward the power of artistic references to shift a work in a certain direction. 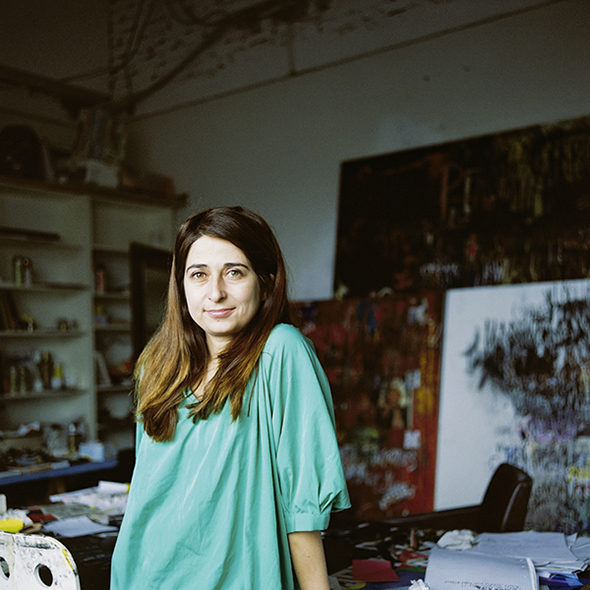 Such unique curatorial moments are characteristic of Despina and what drew attention to her previous show in New York––comprised of leaning canvases, text strewn across walls and ceiling, found pennies on the shelves, and electronic tags acting as a kind of second show within the show. Leaning canvases reflect their state in the studio as Despina works on them and her attempt to bring that feeling into the gallery space. The pennies, ones she collected during her time in New York, can be taken for the “aesthetics of the penny” as she finds herself saying, but then adds it is enough that they gave the space a gritty street quality she likes. The barcode tags attach yet another element, leading tech-savvy visitors to images, links, explanations, and full texts. 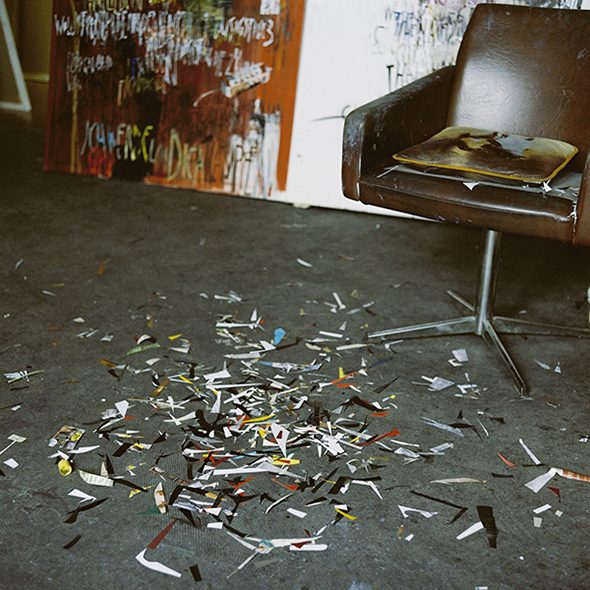 Beyond the curatorial side of Despina are the works themselves––combining arduous physical aspects (Despina cuts out each letter of her text, no familiar Helvetica or Arial, but the personally designed, jagged yet somehow curvy letters unique to her pieces) with nonmaterial aspects, such as the words themselves. These are gathered from a number of sources––something she wrote last year, lists, emails, or posts from the website she runs BPIGS (Berlin Independents Guide). But what ends up on canvas is a simplified, often shorter version, thus its sporadic availability online in full-text form. 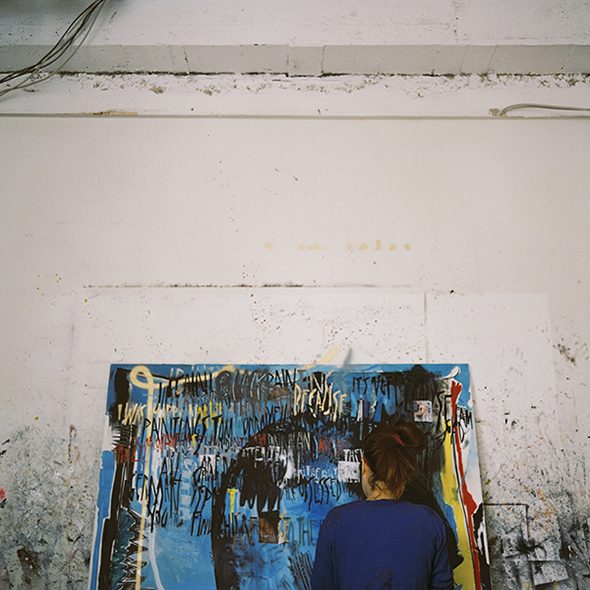 Another element of Despina’s process is that she almost always works in series. This means, such as with her up-coming Berlin exhibition, the name sets the stage while background color choice, text ideas, and canvas arrangement follows. For the upcoming show “Delusions of Grandeur” works confront the suddenness of success and how this affects personality. Despina perfectly describes this moment as: “spending all these years sitting around watching The Wire or Gossip Girl in my case then suddenly something happens and everybody wants something from you… you have to keep up and not snap”. 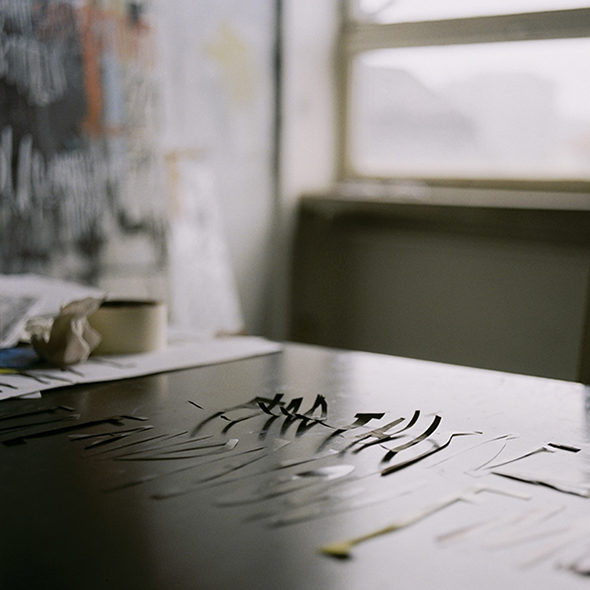 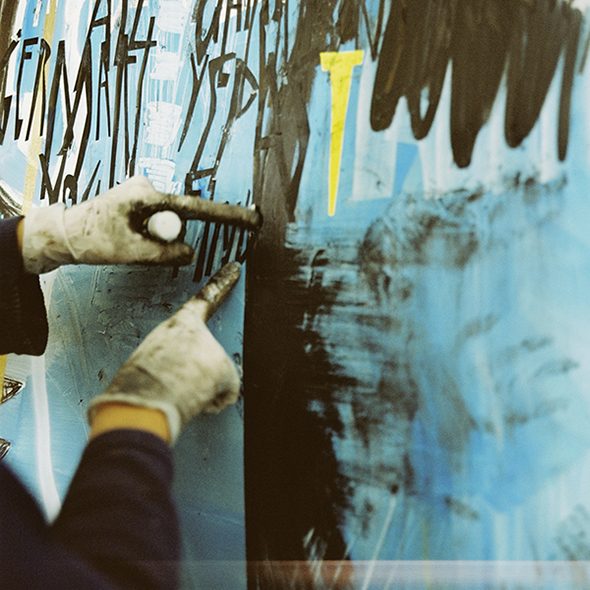 Along these lines is a piece that is a part of this series, addressing art critique. The text floating across the canvas comprises 34 adjectives from the New York Times review of her show in New York, including their definitions. So she responds to criticism by making a painting? Sort of. Despina laughs in reply: “I read reviews like I read the horoscope. You expect from a stranger, basically, to tell you something you don’t know about yourself and your work… it’s a bit absurd.” 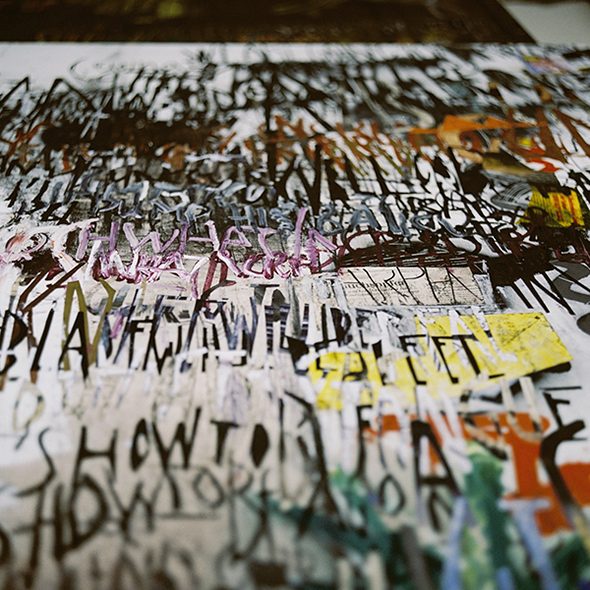 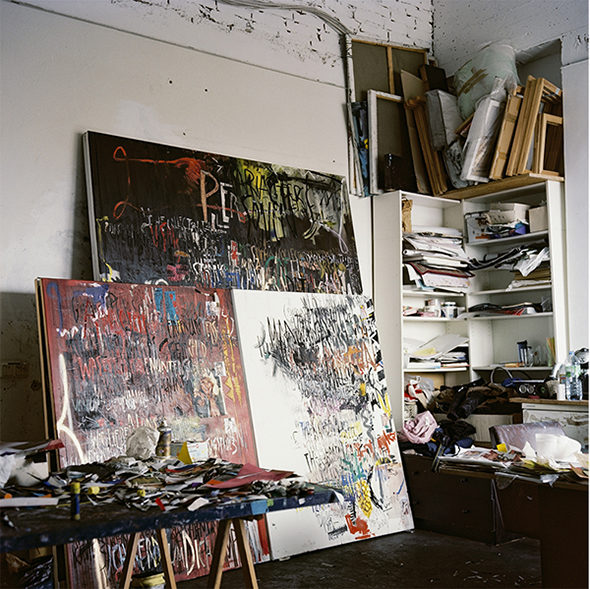 Absurdity finds a physical presence in the darker side of her paintings. Though filled with bright colors and scattered images of playful whimsy, scribbles and scratches and the frantic layering of text give her works a distinct anger. As the word slides off my tongue, Despina immediately smiles in admission, “I guess you could call it anger, I hear that a lot”, she admits, “Basquiat said it is 80% anger. You could also call it… exasperation, obsession… desire to live, to understand. Life makes no sense, and the art scene even less. Of course, there is a reaction to that.” I look around, sensing this reaction in the works that surround me. Despina’s paintings are her response to absurdity––the combination of absurd moments in the art scene, in its absurd criticism and constant self-reflection, in absurd curatorial moments and the absurd artistic process, in checking your email and changing the music a million times to free the passageway from the ever-bombarded, callously judgmental brain to allow those pure, intuitive gut-feelings that give birth to art.