White walls, lustrous black floors, touches of dark wood and flecks of gold. Music in the background fluctuates from death metal, to classical, to guitar-strumming folk. Period detail moldings, floral motif plaster, and an accompanying brass chandelier add an unexpected whimsy to the showroom of Berlin-based fashion label Dont Shoot the Messengers. The space on Zehdenickerstraße in Mitte is minimal but not in a cliché stark loft sort of way. It’s unembellished, refined but homey. There is an antique desk where designer, Jen Gilpin, sits managing the business, flanked by three racks full of her one-of-a-kind designs. 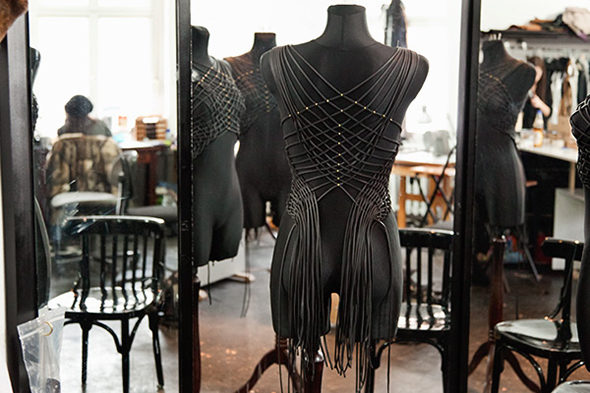 The studio space behind remains colorless bar a spot of cheetah and neon yellow in the very back corner. An ordered chaos in a calming blue light, the birthplace of such magnificent pieces is surprisingly neutral, not fussy, with a wall of windows letting in ample natural light. A black and white hue emanates from everything, creating a sense of calm and order. There are handsome old-fashioned sewing machines, a wall of hanging patterns, and mannequins in a mirrored corner. In answering my questions, Jen’s ethereal voice never pauses too long in methodical calculation; she merely replies with a choice set of words, quiet sincerity, and directness that exudes honesty. 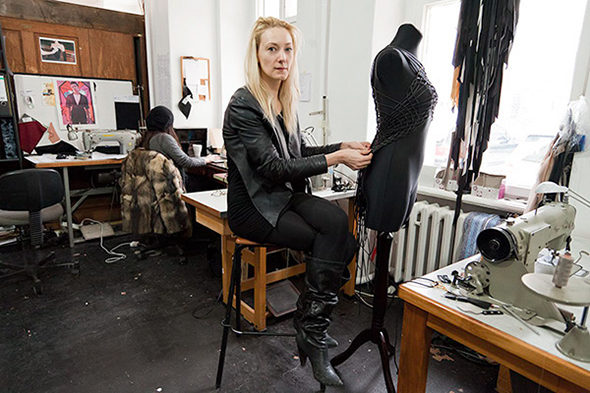 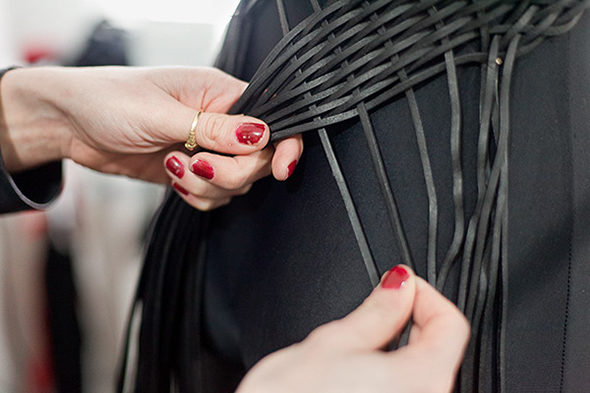 Jen’s relationship with fashion began as a kid, she developed interest in the craft when her mother, though a scientist herself, encouraged Jen to move away from an inclination toward math and sciences and into clothing design. The process of her designs remains humble even today, involving only a pattern maker, tailor, and one or two assistants. The process begins with getting to know the fabric at its most fundamental level, draping and sculpting, trying different sewing techniques. Pattern making and final sewing produces thirty to fifty pieces, enough for two collections per year that sell in boutiques in fifteen countries. 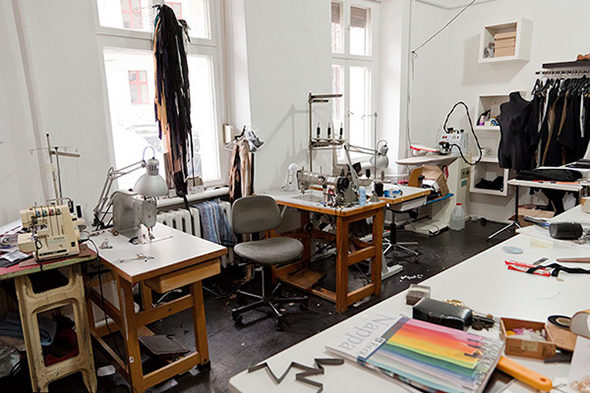 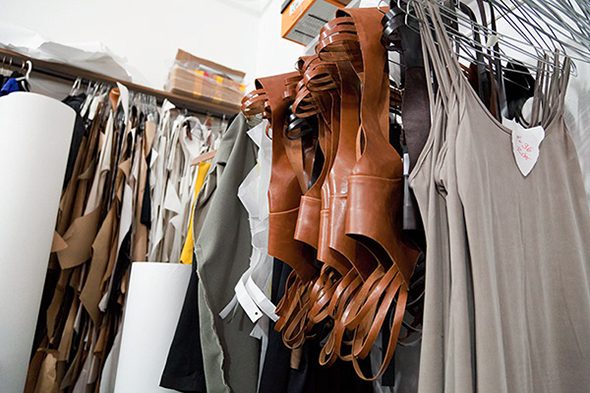 Her style is in constant development, drawing chance inspiration from everyday moments, found images, or a passage in a Shakespeare play that inspired the label’s name (coming from Mercury the messenger of the gods). A doorway in the studio holds pinned up pictures of figures who could be Arctic Inuit. These images of wings, snakes wrapped around necks, hoods and covered eyes resonate elements of Jen’s designs. Then there’s the jacket she excitedly shows me later, its stitching inspired by tattoo lines on men’s backs as part of an Indonesian ritual. Photo shoots also act as inspiration to the collection, a collaboration between Jen and her boyfriend, the photographer Maxime Ballesteros. These photo shoots not only create an image for the label, but depict the transition from a greater distinction of layers with feminine touches at the start of the label in 2010 into a stronger uniformity, mixing masculinity and womanly strength, and a blending of ideas that makes it more difficult to determine where one piece begins and another ends. 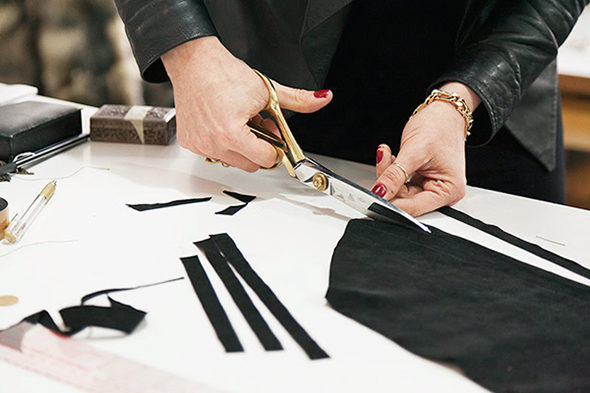 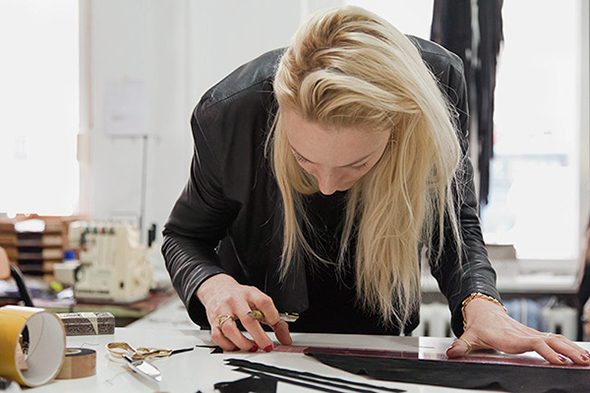 Jen combines a deep concern with how clothes feel next to the body with a sensitivity to how fashion, as a part of everyday life, is a reflection of one’s relationship to the world. Her layers are soft, breathable, entirely wearable pieces, made with only natural materials. One might buy her pieces simply because they feel good, not to go out on the street and look like one of her commanding photo shoots. Silk is the note that gives a lightness and fluidity to features that also suggest a spatial heaviness such as deep dropping sleeves, capes and hoods. Then in contrasting body-hugging moments, minimal amounts of leather define lines and shape the figure. This concept goes further, acting not only aesthetically but also as a personality for the label – soft on the inside and hard on the outside, leather acting as a second skin of protection, instilling confidence in the wearer. 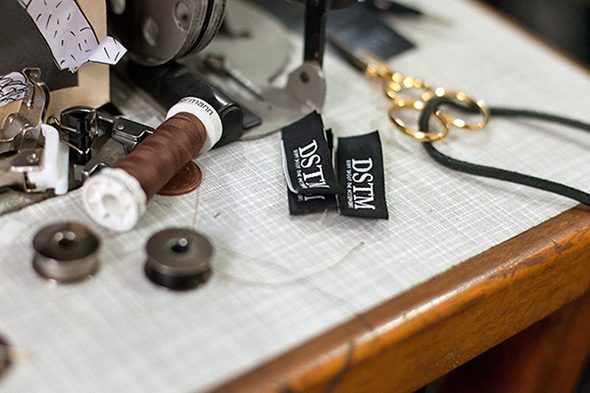 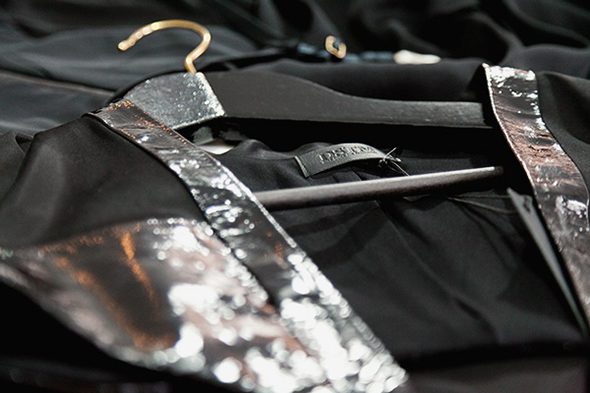 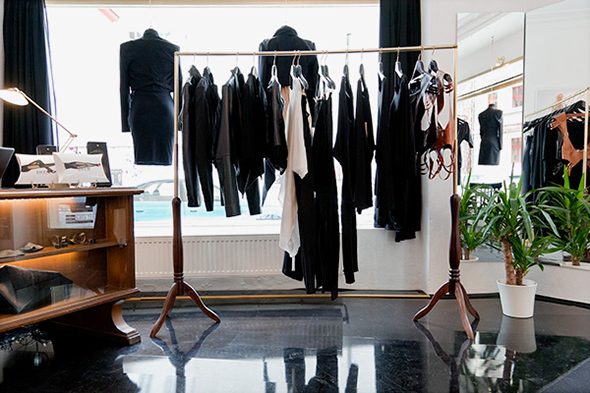 I ask “why black?” and Jen, with a slight smile, claims it’s because she is clumsy and always spilling coffee over herself. Black, she continues laughing off her claim, stems from an intense awareness of form and the craft of making clothes. Color is dangerous. Color, she cautions, has an array of meanings, directions, associations and emotions – it’s easy to get lost in. Black is neutral for expressing shape and silhouette; it absorbs. Absorbing is good for the introvert, she describes, the self-reflective type who wants to take in the world instead of being seen in it. Is this Jen? It’s hard to tell, as she motions toward the leather jacket she wears in response to what is her staple piece. Black leather, introverted? Hm…But like Jen, that’s the label – harmonizing contrasts and dualities.

Chloé Richard is a Berlin-based French photographer and a regular Berlin Art Link collaborator. Her portrait work is internationally published.