It’s easy to feel far removed from the city in this place. I’m looking out of a window over a large grassy field, the scene is quiet but for the low drone of a doom band rehearsing in a nearby studio. Julius von Bismarck’s studio, which he shares with a number of close peers, is a large industrial hall, filled to the brim with the detritus of art production; scraps of metal, wood and plastic litter the floors. Situated in the Malzfabrik, a former malt factory turned cultural complex, the scale of the studio space is impressive, even by Berlin standards. The only discernible artwork I pick out is a photograph from von Bismarck’s Punishment I series, an image of him vainly “punishing” the landscape, striking an oncoming wave with a large black leather whip (the real-life whip sits on a shelf just below the framed picture). The faint doom music, the chaotic industrial space, the menacing whip and the artist’s own metal-band-worthy beard all contribute to the sense that this will be one epic studio visit. 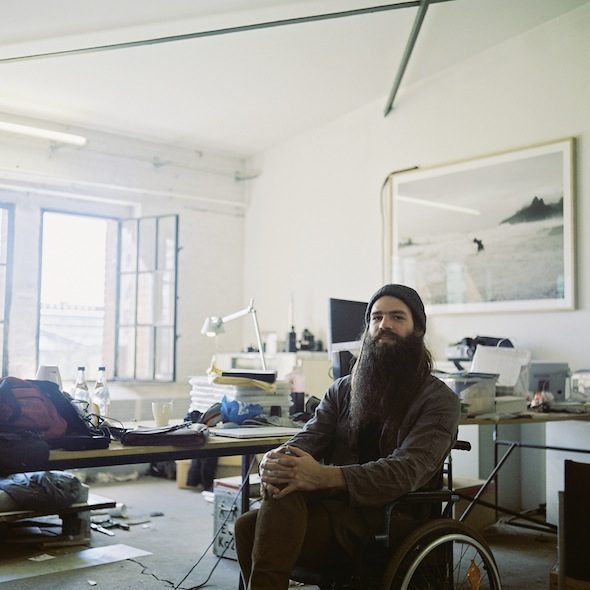 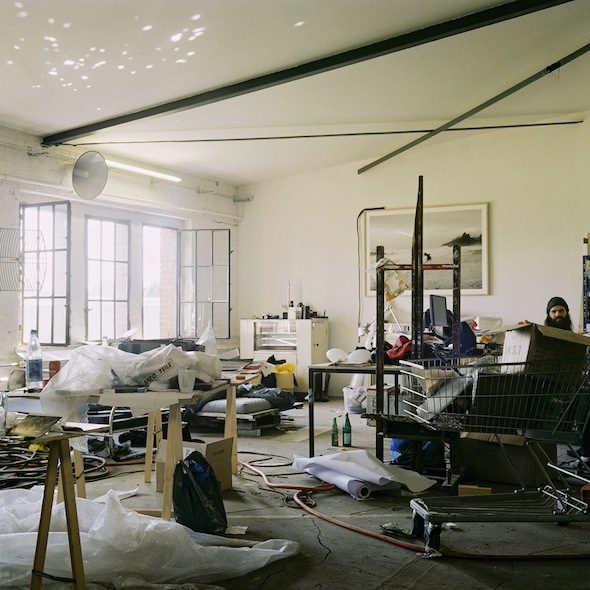 Von Bismarck originally attracted widespread attention with his work using the Image Fulgurator (2007–08), a self-invented device which allows an image to be surreptitiously added to another person’s photograph. Onlookers taking photographs of the Mayor of Berlin, the Pope and Barack Obama were astonished to find new symbols transposed into their snapshots, and the resulting images predictably went viral. Works employing a similar knack for technological innovation have included the Perpetual Storytelling Device (2008); a machine that draws an endless series of pictures from the U.S Patents database and The Space Beyond Me (2010); a UV light projector that tracks the original camera movements of a film, leaving behind a glowing trace on the walls of a circular room. The innovation evident in such works makes them immediately impressive, but what takes them beyond mere novelty is in their dedication to strong visual output, the technological and aesthetic elements form a cohesive whole. The most circulated image from the Fulgurtaor series is of a simple transparent white dove transposed onto the famous portrait of Mao Zedong at Tiananmen Square. The image, strong and simple, provides an elegant access point into the broader context of the work (and the ideal re-blogging fodder). 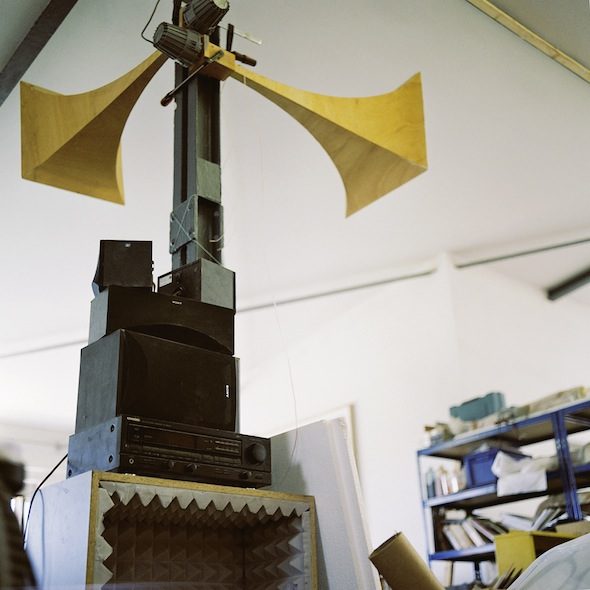 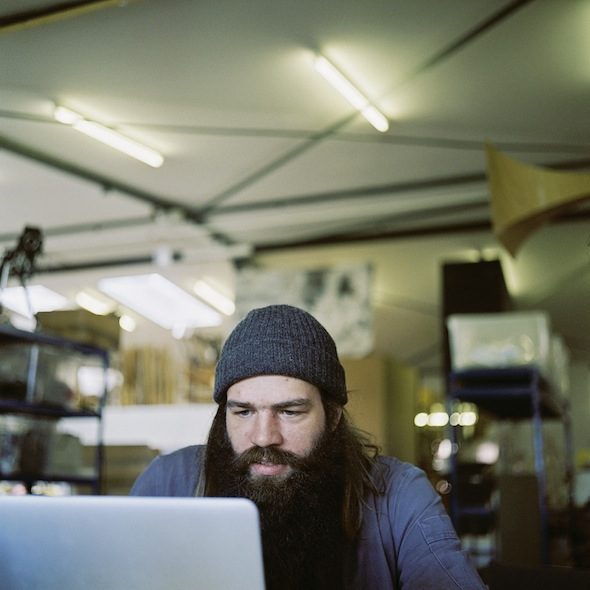 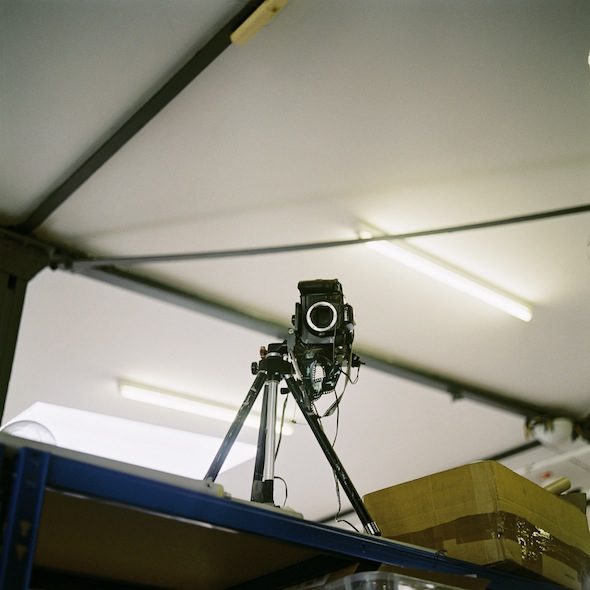 It is not surprising then, that in 2012, von Bismarck was chosen to be the first ever artist-in-residence at CERN—the world’s largest particle physics laboratory. As a place associated with the most obtuse and philosophically abstract ideas that science can produce, von Bismarck, an artist skilled at creating visual cohesion from technological complexity, seems a particularly suitable choice. Indeed, the main work he produced for the residency seems almost a meditation on this. The work, Versuch Unter Kreisen (2012), consists of four lights hanging from a ceiling, swinging in apparent chaos before suddenly appearing perfectly in harmony. What seems at first random reveals itself as carefully pre-meditated and technically precise. The work both exploits technology and allegorizes the role it plays—to reach beyond our perceptual and mental capabilities and strive for greater perfection.

In more recent work, von Bismarck has moved away from his reliance on technology, turning his attention towards the natural world. In Punishment I, von Bismarck travelled the world, seeking epic landscapes upon which to enact his whipping performance, repeatedly striking until physically exhausted. For some pigeons are more equal than others (2012), von Bismarck and artist Julian Charriere took ordinary grey pigeons and dyed their feathers, releasing the birds back into their original urban environments in Berlin, Venice and Copenhagen. As with his former work, there is a strong sense of intervention. The artist places unexpected new information into our field of vision. When we spoke about this, Julius described how most of his works have two kinds of audiences: one with prior knowledge and one without. A person walking down a Copenhagen street may have been amazed to see an exotic bright blue bird amongst a group of plain pigeons, while another may have roamed the city searching for such a sighting. The artworks address different spectators at different times, and it is this enlarged scope and context that interests von Bismarck. In a recent work, von Bismarck planted a sculptural replica of a birch tree in a forest near Berlin. While I was initially skeptical about the literalness of such an intervention, I was later convinced by its simplicity—those that stumble across it are likely be both confounded and intrigued by the false tree. 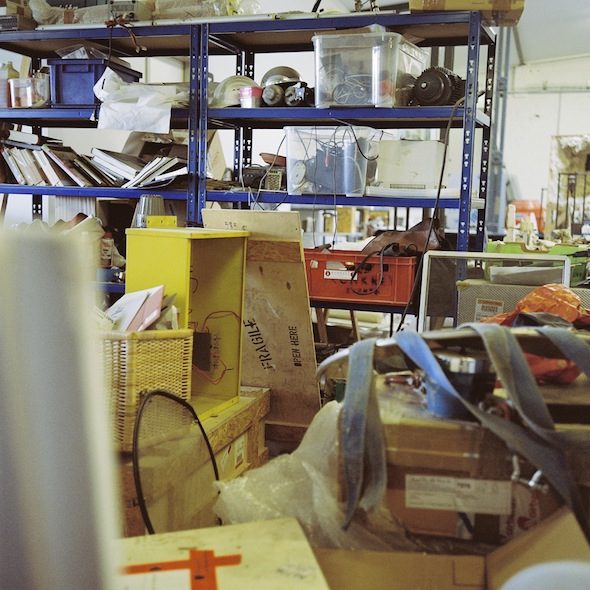 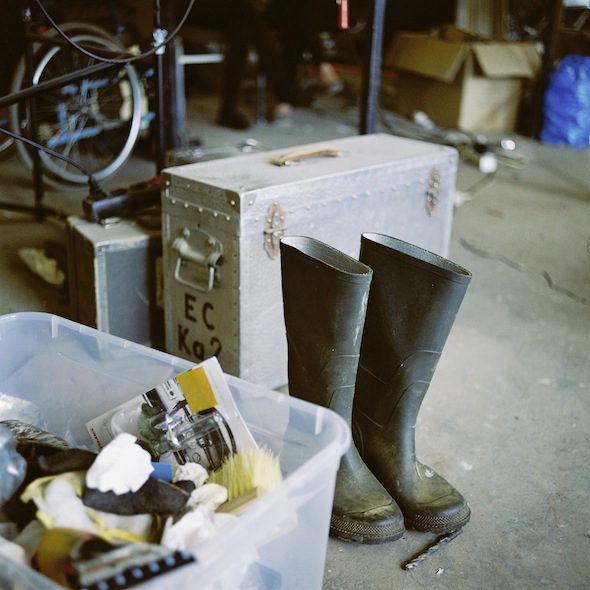 For the second-half of the studio-visit, Julius took us up onto the rooftop of one of the more dilapidated buildings in the Malzfabrik. Through dark rooms of disintegrating factory equipment and inside one particularly sketchy elevator, we made it onto the roof for panoramic views of Berlin and a closer look at one of von Bismarcks most impressive public artworks: Public Face II (The Fühlometer). The sculpture is an eight metre high smiley face constructed from steel and neon tubing. Formerly installed on a lighthouse in Lindau (2010), the face does not wear a constant saccharine smile, but continually changes its mood. Using software that analyses facial expressions, the sculpture was designed to reflect the emotions of passing citizens, beaming the results for all to see. When I first saw a video of the sculpture in action, I was amazed at the emotional resonance that could be wrought from this giant smiley in the sky—I really felt a little deflated whenever the smile turned down. The effect is similar to that of von Bismarck’s futile whipping exercises in Punishment I—after a time the absurd and humorous begins to feel almost profound–because there is something truly epic about the gesture. 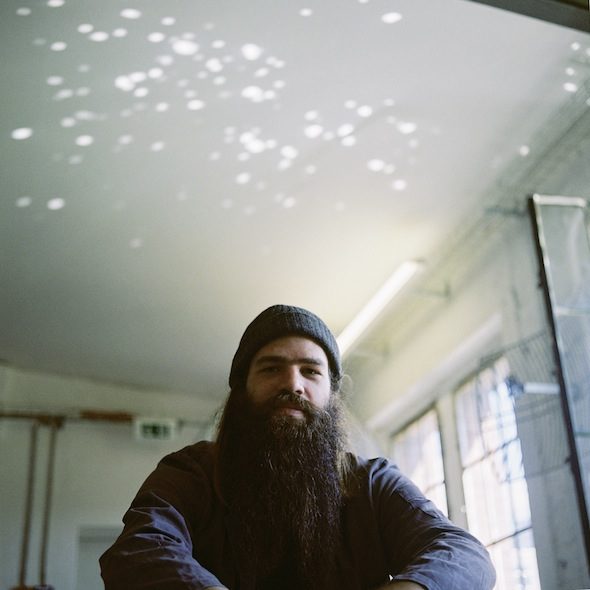 Up on the roof we talk more about ideas and interests than individual works, which strikes me as rather pertinent. People are now far less likely to discuss an artist’s style or technique than they are to inquire as to what currently holds their interest, usually in some field outside of art; politics, history, sociology, biology, particle physics. Von Bismarck may be particularly emblematic of this trend, he studied under Olafur Eliasson at the Institut für Raumexperimente, and his work is reflective of current research-based approaches to art-making. His latest series, currently on display at Alexander Levy Berlin, characteristically involves an intervention in the “real world” and then employs a variety of visual strategies to document the event and elucidate its conceptual basis. The work, Unfall am Mittelpunkt Deutschlands, tells the story of a car crashing into a tree in the precise centre of Germany, documented through photographs of the event, local news stories and a police report. The work thus involves an expanded field of inquiry; one where individual artworks serve as project documentation. When I ask Julius about this, he says that such a mode of working comes naturally to him—explaining that as he feels he is not particularly skilled with language, his ideas are best articulated visually. The result is a kind of project-based conceptualism, not an art of ideas, but an art that expands upon ideas in a multi-dimensional way. 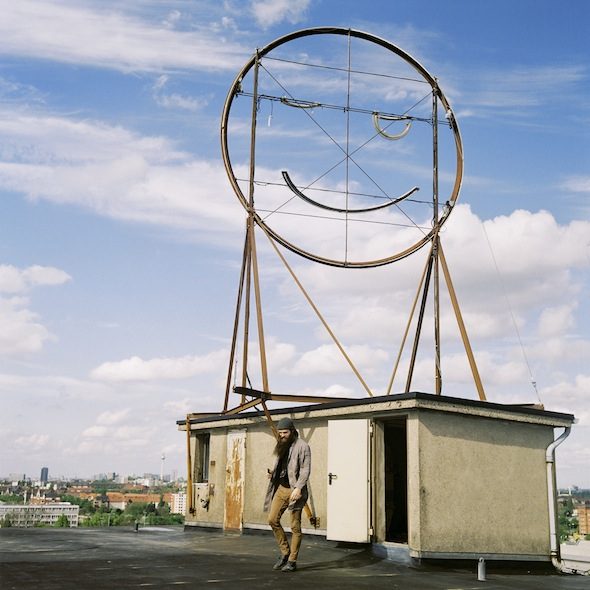 Unfall am Mittelpunkt Deutschlands seems the perfect coalescence of many of von Bismarck’s ideas, depicting a literal collision between man, technology and nature that is loaded with political symbolism (von Bismarck explained how he has lately become interested in issues around national borders). The work actually made me recall the rather naf title of the CERN residency: “Collide@CERN: Creative collisions between the Arts and Science.” Everything that is wrong about this title is defied in von Bismarck’s work, which is never a simplistic coming together of art and science. Von Bismarck’s collisions are far more complicated and infinitely more poignant. Instead of didactically illustrating science, von Bismarck uses technologies that best compliment his interests, whether exploiting complex software and engineering to build a city-wide emotional barometer or using a simple black whip to defy nature.