In the late 1960s a form of art later coined “land art” sprung up from the newly formed circles of minimalism. With artist Robert Smithson and his work Spiral Jetty at its forefront, land art brought the problems of space, borders, and the manufactured versus spontaneous creation to artistic dialogue. Today Smithson’s theory of site versus nonsite, is still in discussion and inspired the name for the current show at km temporaer–-(n)on site. This show is a collision of Smithson’s theories and today’s world of technology and subsequent altered sense of space and location. Curators Elisa R. Linn and Lennart Wolff, inspired by the idea, gathered a group of contemporary artists whose works deal with changes in mapping, the conflict between analog and digital, and what is taken as true in a world of simulated sites. 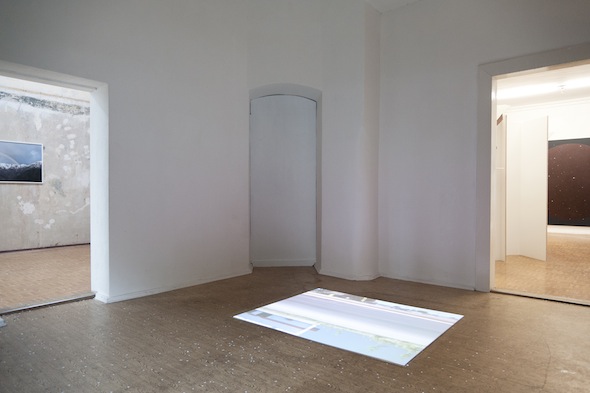 The first work I encounter is a video projected onto the floor. An urban landscape swishes passed–– sidewalks, parking lots and dumpsters, the occasional parked car, or glimpse of a green weed poking up through the concrete. Toward the middle of the projected image, the screen becomes blurry and the image appears to flip upside down. What at first seems to be the same footage is actually a similarly filmed video taken of a completely different city. One city is in France, the other in Canada. Artist Nicolas Boillot points to the issue of connection yet displacement that global development creates. 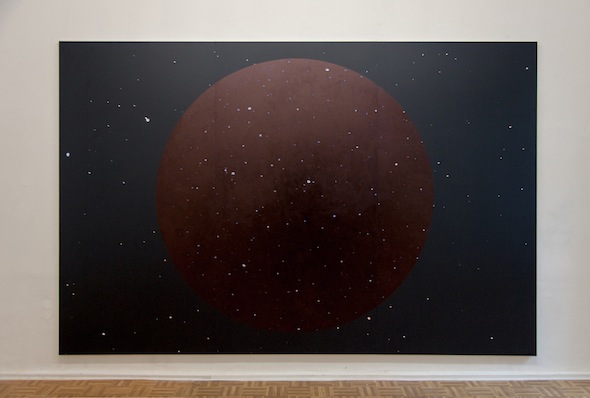 The next room holds Ikebana Arrangement by Davide Cascio, a collection of collage sculptures hidden and isolated in individual white niches, inspired by Japanese floral arrangement in which the base takes precedence. Each piece mixes a certain tension with a sense of balance in sharing certain themes through pattern or geographical shapes. Across the room, Trevor Lloyd’s Untitled Landscape (2011) was originally a large photograph of the earth taken from space. Abstracted and placed in a different context, earth becomes a reddish brown circle barely discernable against a deep navy blue background. Using an analog method, Lloyd created small vacancies through a technique of negatives. These foggy hints of white are all that remain of the original image, creating a melancholy feeling of absence.

As I continue through the exhibit a theme begins to surface: that of tricking the eye, of making the viewer believe a certain thing just to contradict this the next moment. These works question not only my experience with maps and sense of space, but makes me doubt the authenticity of images of places I encounter every day. Take, Spiros Hadjidjanos’ Displacement Maps (2012), which takes us on a simulated journey through what at first appears to be an aerial view of a city, but as the camera zooms closer, the arrangement of digitally rendered cameras come into focus as brand names mimic 3-dimensional renderings of buildings. 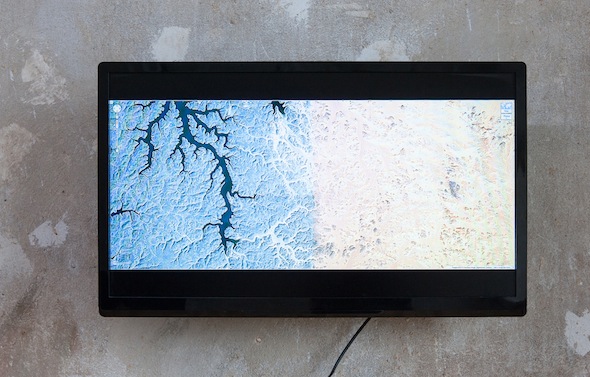 In the works of Daniel Schwarz, photographs depict images of the same place taken aerially from Google Images, but at different times of year, one side covered in snow the other tree-green. Landscapes blending together through connecting lines of mountain ranges or rivers create an aesthetic portrait of the places we discover merely through the Internet. Or take Julian Charrière’s Panorama which at first appears to be photographs of mountainous landscapes, the kind that might adorn the walls of a tourist agency. The images are in fact of extracted gravel taken from construction sites in Berlin.

Though experience is and always will be subjective, a universalizing of the understanding of places occurs with programs such as Google Maps, especially with its Street View capabilities. Yuichiro Tamura’s Nightless explores this phenomenon by using only images from Google Street View to compile a video. One part narrative, another part depiction of technological capabilities, Tamura drives the viewer through cities across the world. From Chiba to Alaska, the narrator tells us a piece of his story as the shaky street view whizzes passed and the sound of radio dialogue begins to drown out his fading voice. 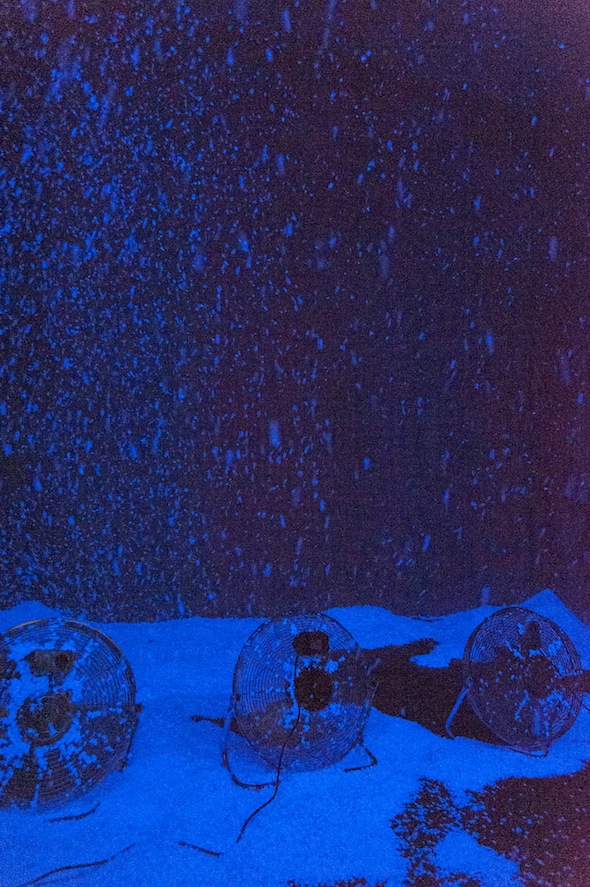 Tamura’s video is a perfect example of how pictorial rationality allows images to replace experience, how with new technology experience becomes the confrontation of an image of an actual (or imaginary) place. In a sense this is positive, as it satisfies a human longing to comprehend invisible, abstract structures through pictorial rationality. At the same time the craving for actual experience goes unanswered. Perfectly timed, I enter the final room, or Untitled (2013), an artificial snowstorm created by artist Simon Deppieraz. Drawing from theories of Lev Manowich, in which, through localization, the existence of one place creates another, Deppieraz transposes a landscape onto the km temporaer gallery space that is a welcomed sight for my screen-scorched eyes.