Located on Hall street a stone’s throw from Pratt institute is an enclave of studios within a repurposed industrial building––another victorious acquisition of real-estate for the Brooklyn artist community. Down a winding hallway, past screen printers and painters, you can find James Clar’s studio. It is an ordered space naturally lit and outfitted with the tech world’s crown jewel: a 3D printer. 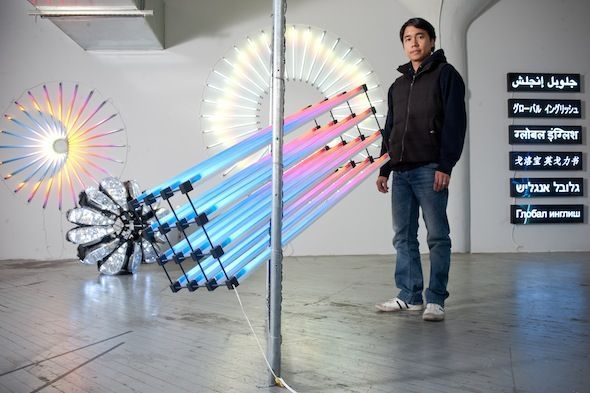 Our discussion about James’ work began with marveling over the possibilities of such a technology, especially in light of the ongoing debate about the file sharing of working plastic firearms. Resting on his desk was a miniature version of a pistol, he had found a file for the original working plastic firearm and created a miniature version as an experiment. Rather than creating the object as a sensational act, it serves as a focal point for philosophical analysis. 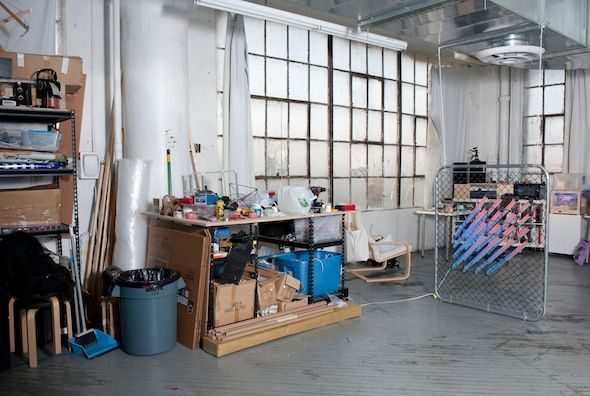 This analytic thought process has been a constant thread in the creation of James’ work, even in the earliest stages of his career. Beginning as a film-studies student at NYU, he found that the unknown variables of life on a movie set were less preferable to the world of computer animation, which could afford a more controlled recreation of environments. Transitioning to a program at ITP and steeping himself in media theory led to an interest in the physical aspects of screens as a delivery system for the stories and emotions presented through a visual narrative. “These systems run on projected light, so I thought it would be interesting to break down the media and control light itself.” After arriving at this realization and a series of travels from a residency at Eyebeam in New York, a two year stay in Tokyo, and five years spent in Dubai, he was left with a defined visual language of light to describe a uniquely macro view of the world. 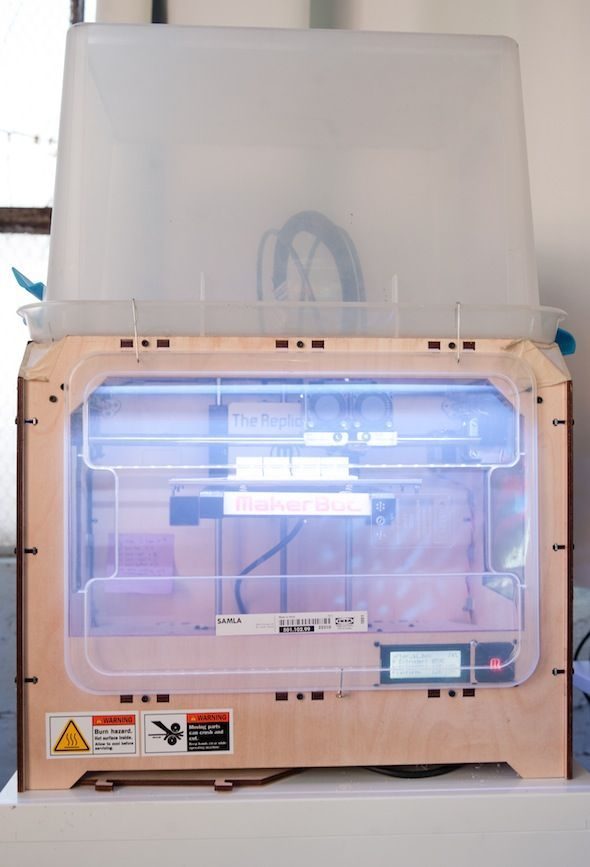 The first light sculpture James described during the visit was NASDAQ Recursive Loop, a circle of florescent tubes which track the cyclical nature of stock values during the turbulent years of 2007 and 2011 when recession forced a halt to many construction projects in Dubai. James describes that living there during this time had a consistently political atmosphere. “Dubai itself was really made through PR. They built their society based on communication and technology. It wasn’t until I moved there that I saw this was not the city they presented. I expected everything to be futuristic, but it was entirely taken over by construction and changing from week to week. Until the crash. Then people thought, okay, let’s try to fill the buildings we already have.” 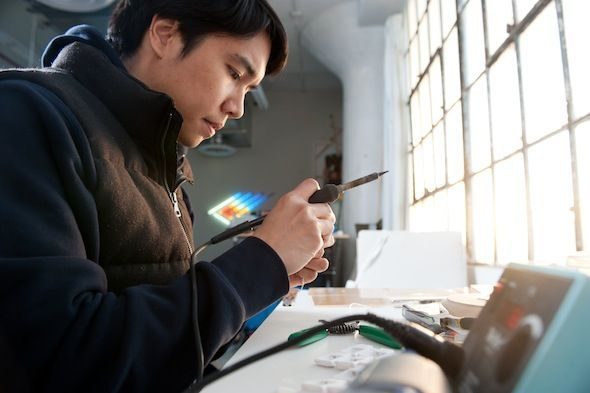 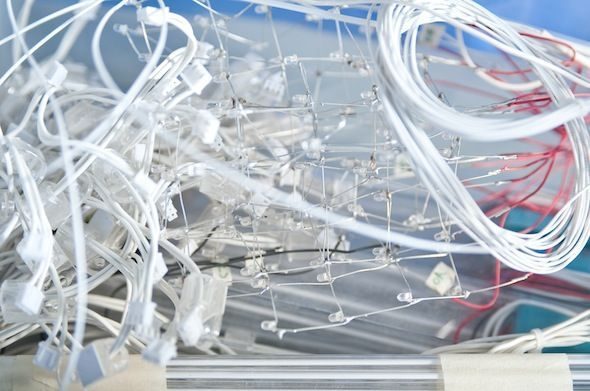 Transitioning from a focus on economic effects to a focus on the effects of language on thought, James spoke briefly about another project titled Global English. This phrase is displayed and written phonetically in multiple languages, back lit by LEDs, and housed in acrylic boxes for comparison. “The structure of language forces you to think using a different logic. I can’t not think in English. If you’re born in another country, your logic is slightly different depending on that language, and I think that’s important for the creation of ideas. Through globalism, everything is beginning to even out, and it becomes important to preserve the nuance of cultural difference.” The mixture of light and language alerts viewers to a connection between information and technology in their most elemental interplay. In this way, many of James’ light art works deal with the simplification of reality when viewed through the lens of technology. 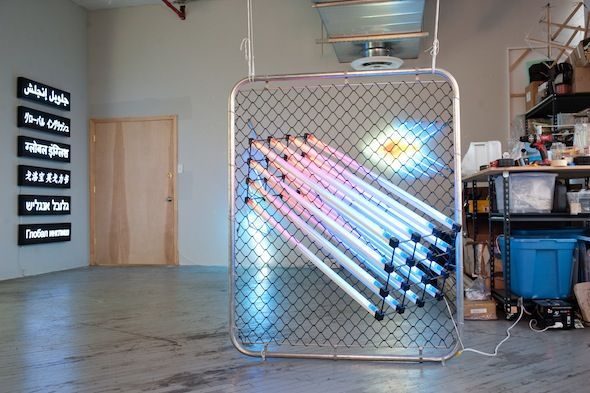 Adam Curtis’s mini series, All Watched Over by Machines of Loving Grace, was brought up as a congruent view, noticing disconnects between the chaos of naturally occurring systems versus the attempts to algorithmically account for reality. Through a series of works utilizing the geometric simplicity of florescent tubes braced by custom made 3D-printed plastic joints, a world view is analyzed where chaos of rain and lightning become an easily plotted rendering of the original phenomena – such a rendering does not account for the diversity of it’s inspiration. Like the nuance of languages which inform thought patterns, the delicacy of natural structures are up for preservation. 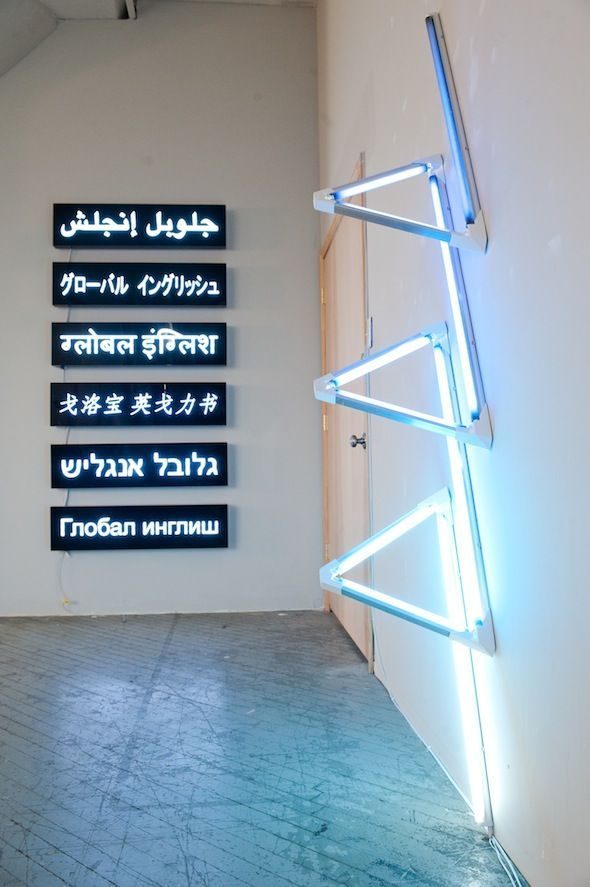 Originally James traveled to Dubai through his work as a designer for an architectural lighting firm, but came into contact with the gallery scene there later. His desire to present works that dissect media and technology were met with a mixture of support, but also a more traditional and conservative view of what is considered art. In his opinion, “art is allowing anything to happen. Any conceptual idea can be produced.” One of the reasons for his moving back to New York was an interest in finding a freedom from the conservative context that binds many artistic communities. While the city scene is much more saturated, it also affords a possibility to be seen as a member of the global community. This intent to make work that stands on its own, also extends to encompass a view of political events that may shape his work. “In New York I’m trying to allow the work to become more abstract and aestheticized. You can’t get really exact about certain events because news becomes old. You have to think of the macro view of events to make a more timeless statement.”

Lucia Love is an NYC based multi media artist with an eye for the whimsical. Be on the look out for her weather reportage, paintings, sculptures, and musings at lucialoveart.com

Kristy Leibowitz has been capturing and enveloping the essence of people through her portrait photography. Kristy began her career as a photojournalist working with news media companies including, The New York Daily News and Getty Images. Continuing on to become the photo editor at companies like the NY Daily News, The Mail Online and Bloomberg LP. While working in the news media world her true passion for the art world started when she was the in house photographer at the former Deitch Projects Art Gallery. Kristy has been involved in countless exhibitions, including Womanizer, The International Fair of New Art, The Armory Show and Art Basel Miami Beach. In 2006, Kristy was commissioned by the New York City Housing Authority to direct a mosaic revamp of public parks between the Bronx and New York. Prior to beginning her freelance career, Kristy attended Parsons School of Design in New York.