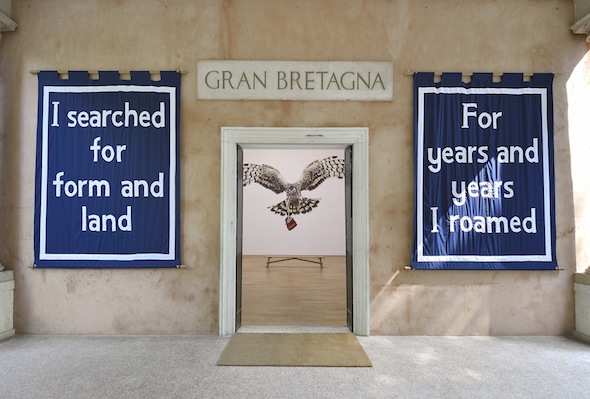 You don’t need to have witnessed the immolation of Edward Woodward in The Wicker Man to appreciate the grand British shamanic histories alluded to in Jeremy Deller’s English Magic. But, rather than heralding any continuing tradition of mastery and conquest, Deller’s works point to the places where the idea of grandeur has failed us.

For the British Pavilion at the Biennale, Deller created a clever play on the notions of magic–drawing on England’s myths, folklores, symbols and mysticisms – and replanting them in the contemporary, by making pithy and playful associations with war, with real and imagined revolution, with gross economic imbalance. English Magic is a punned title, immediately apparent as a tongue-in-cheek, even playful ribbing of the notion of England’s grandeur, traditions and masteries. 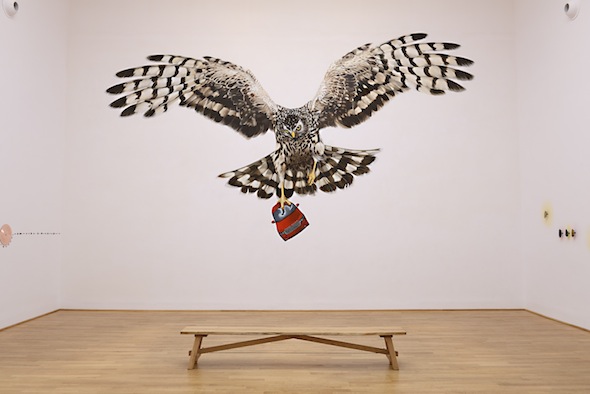 To label the work playful, though, is to risk missing the point; it’s a sinister joke, and potent with mockery and pretence. The ‘magic’ that Deller references is a call to attention to the larger failings of Empire, and of capitalism at large, in what has been referred to as a declaration of ‘war on wealth’.

There’s a strange narrative at work here, a play between the composition of past relics, contemporary history, and imagined futures. Through the pavilion’s open doors (flanked by yew trees pruned to resemble hedges) a giant mural is visible; a bird of prey gripping and crushing a Range Rover (that potent symbol of wasteful wealth) in its talons. This symbolism is carried through in a video work which documents the crushing of two more of these suburban tractors, coupled with rather majestic imagery of hawks and harriers, the Lord Mayor’s procession through the streets of London, and all accompanied by a steel drum orchestra playing Vaughan Williams and Bowie. It sounds messy, but it comes together–a showcasing of England’s finest. 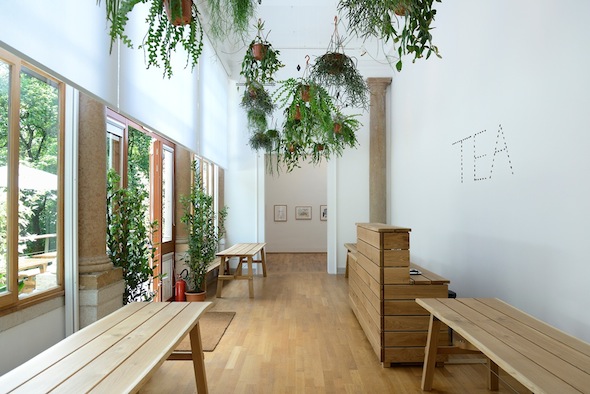 Neolithic and Palaeolithic axes from the Museum of London appear, highlighted in bright neon spray-paint. Paraphernalia from Bowie’s 1973 tour of Ziggy Stardust is juxtaposed against images of industrial labour disputes in Northern Ireland in the same year. In another room, we’re guided back to our contemporary anxieties via drawings made by British soldiers convicted after the war; naive portraits of Tony Blair, David Kelly and their cohort, which serve to document the personal legacies and miseries of war.

Elsewhere, a future insurrection is imagined (which brought to mind J.G. Ballard’s dystopic Millennium People), in which the tax haven of the Isle of Jersey is attacked and its capital, St Helier, put to the fire–a social uprising against corporate wealth. The imagined protest flags of this fictitious movement are also featured–bright and comical in design and colour. Here again, Deller’s playful aesthetics belie a darker intonation, perhaps a call to arms. Is he tapping into a collective unrest, or hoping to conjure one? 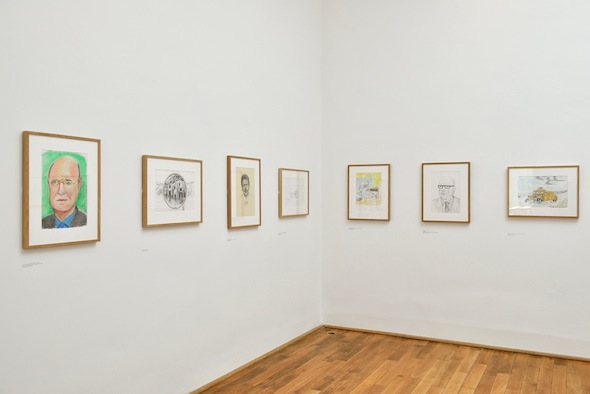 Jeremy-Deller – “You Have The Watches We Have The Time”, installation view, British Pavilion, 2013; courtesy British Council, photo: Cristiano Corte

As it happens, the implied aggression of one of Deller’s intended works–a banner entitled “Prince Harry Kills Me”–lead to its exclusion from the Biennale. The intended meaning of the banner is somewhat obscured; it could exist as that great (arguably British) contribution to humour, the pun–i.e., “Prince Harry makes me laugh”. Given the repetitive symbolic use of birds of prey in the pavilion–and cited by Deller as the source for the banner–it could also be read as a reference to an incident where Prince Harry was implicated in the shooting of endangered hen harriers. More concerning to the British Government, however, was a possible reading in reference to Harry’s tour of duty as a helicopter pilot in Afghanistan, and the rather uncomfortable references he made to ‘taking out’ the bad guys.

There is also a reference to the usurping of the Venice foreshore by the Russian billionaire Roman Abramovic, who at the 2011 Biennale parked his behemoth yacht Luna (and its attendant security detail) beside the Giardini, thus appropriating and occluding a rather spectacular view–an unnecessary and enraging flexing of fiscal power. In English Magic, Deller has invoked the ‘ancients’ to deal with Abramovic–a large-scale mural depicts the social reformist William Morris hurling the Luna into the Venetian waters. 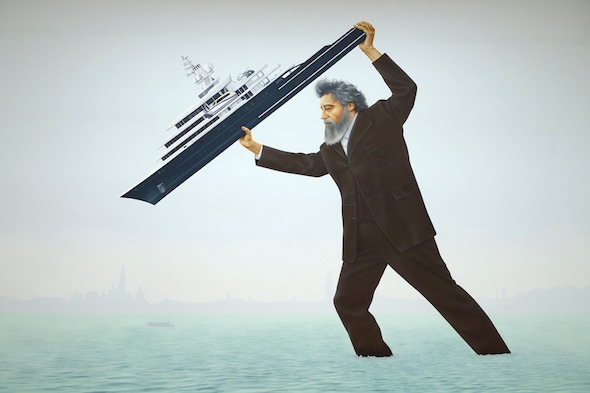 Attending to topics of gargantuan wealth (and its social miseries) is perhaps awkwardly appropriate at la Biennale, which had its beginnings as an Art Fair; a site for the marketing, sale and exchange of art and capital. One could argue that this is still one of its primary purposes, if not overtly expressed as such.

Deller is largely artistically uncategorisable in the most contemporary of ways; as an artist, he doesn’t work with mediums–he neither draws, paints, or sculpts. He creates juxtapositions, interventions–and as such has sometimes been labeled a ‘curator’, rather than an artist. While I’m not interested in drawing out a dialogue on the bifurcations between artists and curators, his approach is interesting in that–not being wedded to medium or particular skill–it allows his works to perform a broader, overarching perspective, rather than exist as a showcasing of intensified skill (c.f. Sarah Sze at the American pavilion, for example, whose work is brilliant and magnetic in a completely different, meticulous and formalistic way). 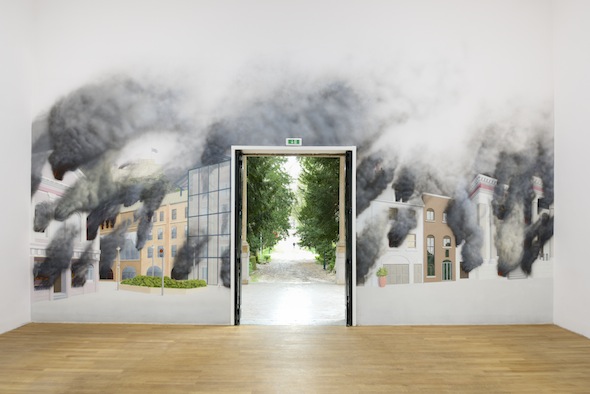 My sheer enjoyment of the pavilion may well have been coloured by the fact that during my viewing of the video work English Magic in a crowded room at the rear of the pavilion, a group of people entered, all bedecked in t-shirts proclaiming their membership in the “Melodians Steel Orchestra”. I turned to the red-cheeked and jubilant woman standing beside me, who at that same moment appeared on-screen, artfully rolling a stick around a steel drum. “It’s you, isn’t it?” I whispered. She smiled and winked. “Great job!” I offered. The room was full of smiles and applause–and perhaps our shared benevolence at that moment eclipsed and softened the video’s more bellicose message.

Incidentally, Bowie’s “The Man Who Sold the World” proved to be the Biennale’s most-enduring earworm–even more so than the Ravel adopted by Anri Sala–as I caught myself humming it this morning whilst in the queue at Pennymarkt. Deller’s imagery has stayed with me also. While it had neither the longest queues nor the most attention, Deller’s offering at the British pavilion is most definitely worth an extended visit.

Ally Bisshop is an artist and researcher from Australia. She is currently completing a Ph.D. through the National Institute of Experimental Arts in Sydney, while living in Berlin.