Tobias Becker returns to Berlin with a series of maps, conceptual representations of how the world might exist when breaking with convention. Until the 24th August we will have the opportunity to view his solo exhibition Eines Tages at Galerie Hunchentoot. This new project will be focused on temporality and how this is conceived in a subjective manner; we are asked to leave behind traditional notions and see the world through our own experiences.

In this exhibition, we travel back to Becker’s years at Universität der Künste, where he showed an early interest in maps; an early project entailed him tracing his movements in a particular scenic space, drawing them to conserve and remember his own path. 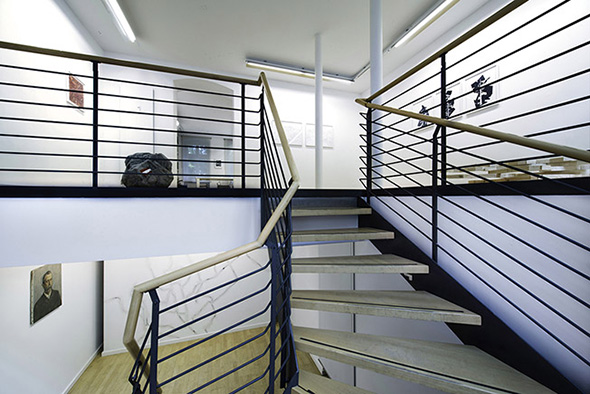 Last year, at Infernosque, Tobias Becker presented the project Maps and Mountains. The project was an installation of a landscape created from unwanted school maps that the artist had collected. A 3D landscape with relief was formed, welcoming the viewer to walk through and form their own perspective of the terrain. The purpose of the installation was to offer a new perspective on the aesthetic development of the world’s reconstruction. Such a result is one the artist often seeks out; his interest lies in the experience of the individual in forming a subjective reality.

The present exhibition is shown in a small gallery with two levels. The works in the basement are directly related to the artist–hanging on one wall is a portrait of his great-great-grandfather. The self-portrait Eines Tages has been manipulated with an interlacing map drawn over his face. This map is Tobias´s signature, first created in the university project mentioned before, and now presented as what he calls the “inherited map”. We all have a marked path that runs in our families, guiding us to do what is expected, though our actions remain ever our choice. Tobias represents the changes that have passed through the generations of his family. On the basement wall the same diagram is drawn in a larger scale with some parts covered by white paint. Aptly titled Angenommen, the work marks out a new path for the artist who has certainly matured since his university days. 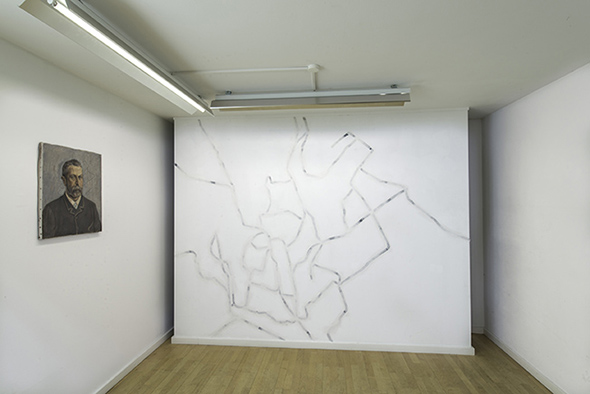 Moving upstairs, there are two pieces of work that appear to be in conversation with one another. In “Felsen”, the artist recreates a large rock with the red-and-white milestone symbol – used to guide travellers in the mountains – painted five times on the rock. Above this we find a section of the Austrian Alps represented on a map that has been dissected into eight triangular pieces. During the late 1960’s, Land Art artist Robert Smithson did a series of works called Non-Site in which he transported rocks from a specific area and placed them in the gallery, claiming its validity as the actual site. Tobias Becker creates a version of this; branding the rock with a recognizable symbol and supporting this with a map to identify the original location. However, putting five milestone marks on the stone negates its function as a path marker, as it points the viewer/traveller into five different directions. Through the absurd undoing of a symbol for navigation, the artist creates his own Non-Site. The dissection of the map into eight pieces simulates Smithson’s procedure, as he designates an area with a focal point, through a Pasculus calculus, once again breaking with the conventional limits of a drawn delineation.

The Land Art movement claimed that the individual should create perceptions of reality with their own experiences; we find in Gebiet that the representation of the center is an allusion to the individual who must live his own experiences and, as a result, recreate the world in a subjective manner. Breaking with the limits of rational technique and physicality, Tobias Becker goes back to the Non-Site, representing the work inside the gallery as a whole. 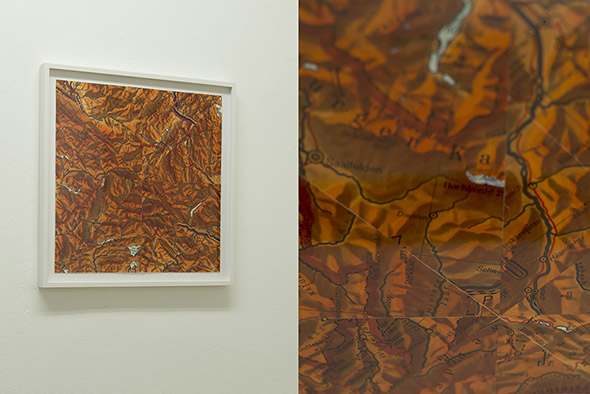 Other works found in the gallery follow this idea of space and time being manipulated in a subjective way. The late 60’s presented a controversial way of thinking, searching for new ways to break with social constraints and the illusion of freedom, moving away from conventional sculpture and the specifics of space. Tobias Becker revives these thoughts as well as pointing out, through the out-of-date maps he collected from different schools, that time reveals different aspects in space.

Alexandra Borras has recently moved to Berlin where she is completing her studies in Art History.