On Sunday, July 14th, the solo exhibition Head Facing Left by Dafni Barbageorgopoulou opened at The Wand, as the second part of the trilogy titled Discipline(!), curated by Anna Redeker.

In the intimate room of the project space, three geometric sculptures of different dimensions, made of black and white laminated plywood panels and colored light bulbs, stand within the space. Two stand vertically, similar to articulated furniture, and one small one stands horizontally resembling a Le Corbusier building maquette. 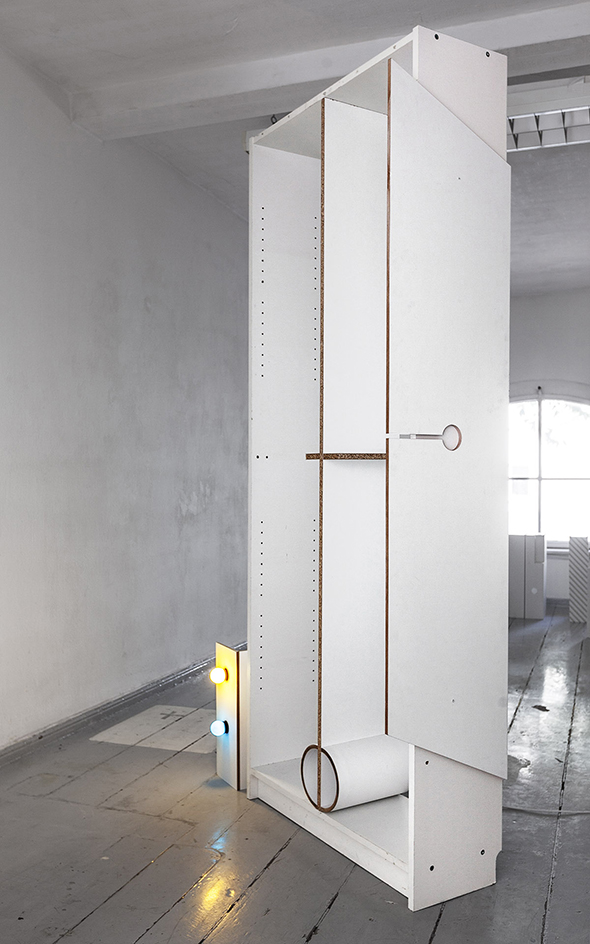 For this series of works the Greek Berlin-based artist gathered together a wide range of suggestions and references from architecture, philosophy and sociology to reflect upon the last six years. Starting from drawings and notation systems representing the body movement of Hungarian choreographer Rudolph Laban–who takes the hand as a unit of measure and the rectangle as the shape to represent the human body–the artist reinterpreted and transferred into objects a series of reflections. On one side, concerned with the relationship between gymnastics and functionalism, on the other, with the idea of labyrinth theorized by 19th century sociologist Henning Eichberg.

As a result, the translation of movement into forms of familiar and geometrical sculptures becomes real. Head facing left, Inverted diagonal, and One-legged bridge pose, are at the same time work titles and postural instructions.

Through rectangular, straight, and curved lines, Barbageorgopoulou creates a hybrid combination. She mixes modernist forms (devoted to specific functions) with apparently unfinished IKEA furniture aesthetics where some scratched holes makes you think of a refinement process still ongoing. The final objects thus embody a sense of space and place, as well as the idea of self-loss and a consequent attempt to find something.

Dafni Barbageorgopoulou’s practice usually focuses on the mapping of bodily experiences, which are interpreted into two-dimensional forms (patterns, collages) and then into objects/installations within space (tapestries and sculptures). At the centre of this process is the way in which the body tunes into a creative flow. A sense of energy and repetitive movement conducts new rhythms.

Dafni Barbageorgopoulou is a post-graduate student in Sculpture at the Royal College of Art (London). In 2009 – 2010, she was an artist in residency at Künstlerhaus Bethanien between 2009-2010 and in 2012, she was awarded the Goldrausch Kunstlerinnenproject Art IT. Dafni has also widely exhibited in private galleries and institutions in Amsterdam, Athens, London, Cologne, Paris, Berlin since 2003.