Andy Graydon’s studio has been left in a state of preserved neatness while most of his current work has been migrated to a residency in Vienna. He seems pleasantly challenged by having to transfer his work back to Berlin through verbal descriptions, and it is somehow more appropriate to hear him talk about his projects and evoke his installations, which themselves often struggle to grasp an idea without an object. In many ways, his studio is better defined by its sound – the churning noise of the old film projector he turns on, a needle scratching against a record, the sound of businessmen and children outside on the Mitte street, and Graydon’s own paced, fluent descriptions of his work. 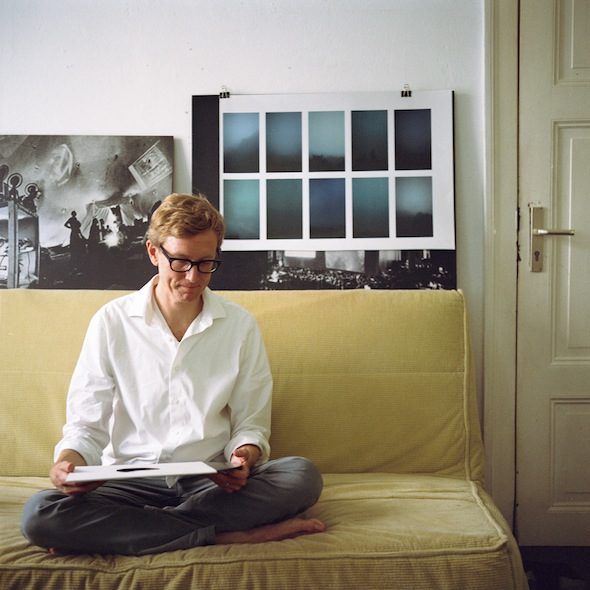 Graydon sets up a small box-like arrangement of two open books and begins a projection onto one of the pages. The projector clicks and hums. The viewer has to lean invasively close to the fragile book construction in order to see the picture, which creates a feeling of simultaneous intimacy and alienation: of being an estranged giant peering into the window of a tiny cave. He explains that this is something he has been working on for a few years – a work called The Findings (2013). The Findings begins with a narrative: a man with a deep, slightly foreign sounding voice tells you that he has found something incredible in the forest. He struggles to describe it, but gives up and excitedly tells you to follow him. He tries to describe it again, and gets confused, admitting that he has gotten a bit lost, but he explains that it is right over there, around the corner. He guides you along, trying to recall the object several times, but his descriptions are vague and sometimes incongruous with each other. This man’s desperate attempt to locate an idea in an object, a place, a narrative and a description creates an uncanny sensation as the man’s own memory changes and grows independent of him. To Graydon, ideas can become automatons – inanimate objects, created by him, which take on lives of their own and escape his control. 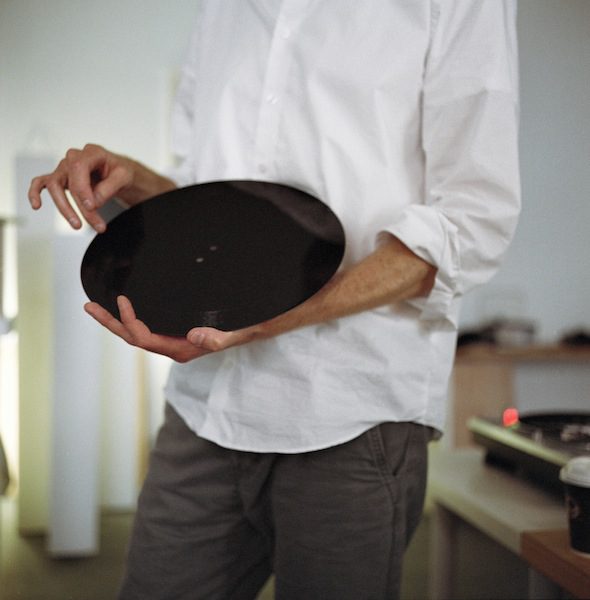 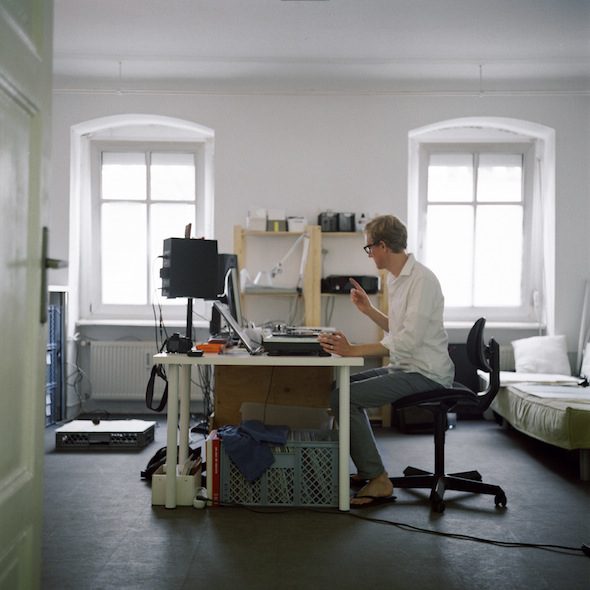 Sound also becomes automata in Graydon’s recordings of the background noise of twelve different international exhibitions in Untitled (plate tectonics) (2009-ongoing). These seemingly authentic replicas of the sound space of galleries become ghostly remnants, estranged from themselves when played in an empty gallery in another location. Graydon explains that recording the soundscape of a gallery is like lifting one surface of a space, which he then reframes in a new space, migrating traces of the original exhibition into the space and sound of the present. Nothing repeats: Graydon explains that this constant reshaping of the context of the present happens always and with everything, but is most obvious in sound, which is inherently temporal.

Printing his recordings on dubplate records (a particularly fragile record which begins to break down after 50 repetitions) allows the slow disintegration and transformation of an authentic experience to be manifested in a tangible way. Each repetition of this sound is a new experience, with new crackling, popping, and sliding as the record gets progressively damaged. This frustrates the illusion that the listener is somehow authentically re-experiencing, for example, a New York gallery in Berlin.
At the same time nothing is truly isolated in the present, it always contains marks of its creation and traces of its history, be it physical traces, like the disintegration of the dubplate records, or conceptual traces, like people shuffling and coughing through a gallery. 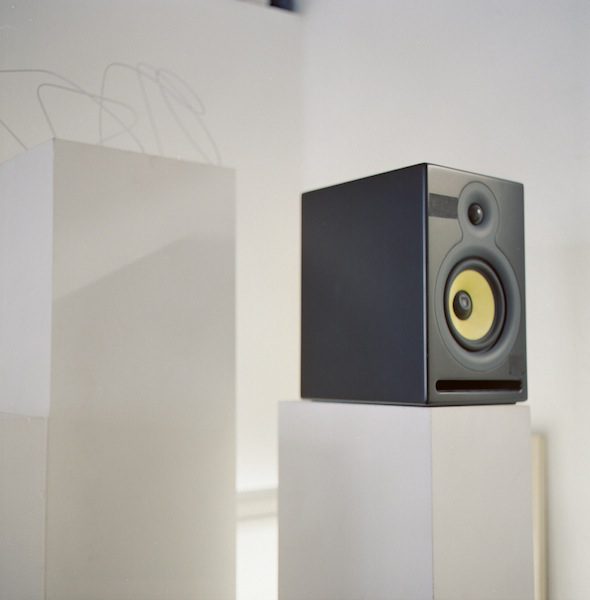 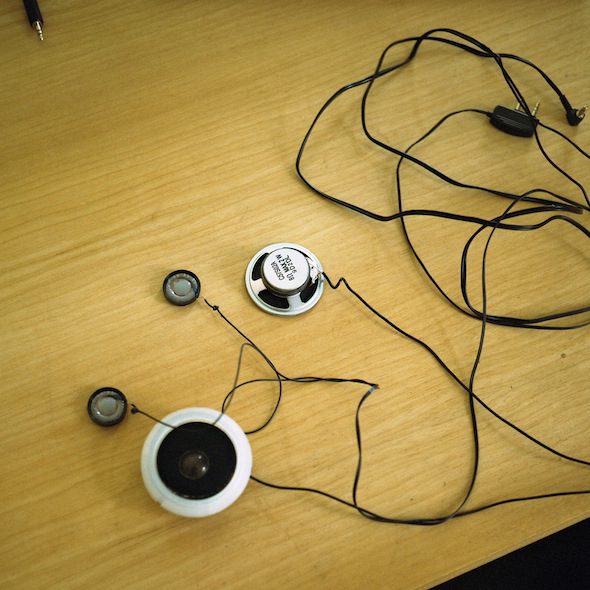 We as viewers and listeners attempt to construct stable containers for experiences: containers that can be physical or conceptual, like narratives and definitions. Graydon chooses background noise for his sound works, which resists being contained in any single object or idea. Since there is nothing singular to focus on it becomes impossible to construct a clear narrative from the sound. He records chance noises, of footsteps, the hum of air conditioning, doors opening and closing, of people talking quietly with occasional lapses into total silence. We often disregard these noises, which are simultaneously unique and meaningless. This is especially so in a carefully curated art gallery, where the visual arrangement of the space takes preference. 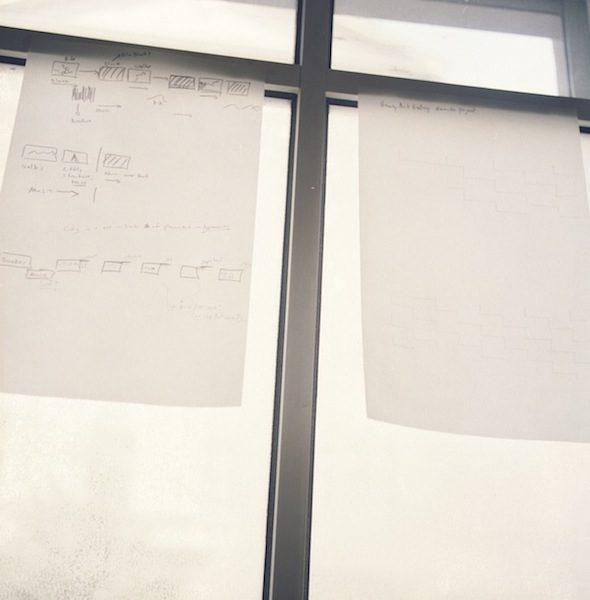 Graydon is fascinated with chance, disorder, and the traces of life and history which can be found on inanimate surfaces. In his short film Vostok, Faretheewell (2011), a Japanese designer named Yukitomo, hired to create a model alien ship for a Korean science fiction movie, wanders around Berlin doing research and taking many close-up photos of city textures (broken bits of rocks, cement, lights, and glass). His role is to gather the many weathered and disregarded fragments of the city surfaces into a spaceship construction, admitting to his friend (an absent figure that Yukitomo talks at throughout the film) “yes, I guess I am the cement mixer then”. Yukitomo identifies that his role is to construct a form from the materials around him. But like the life and traces of history he sees in the industrially built surfaces of the city, Yukimoto’s alien ship is more than just concrete, taking on a life and presence of its own beyond his control or even understanding. 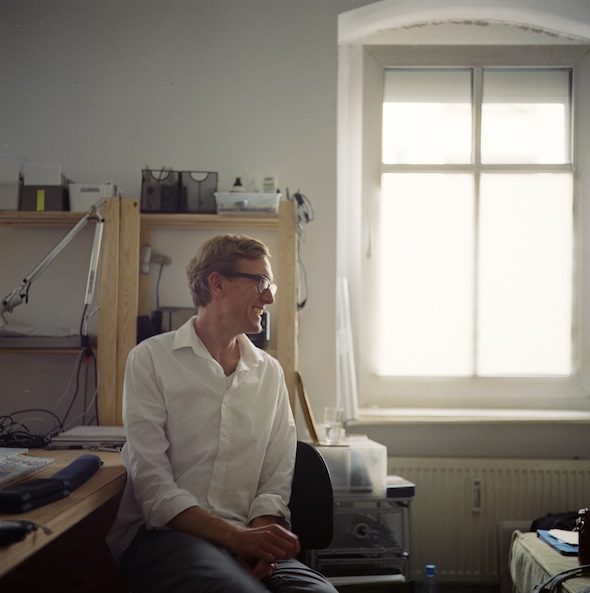 The invasion of chance gives artworks their life and their autonomy. Graydon’s installation works reveal but also frustrate our impulse to create neat containers and frames. His video and narrative works explore his role as an artist to create these containers and frames with the understanding that they will always fail, becoming entities of their own.