The most recent exhibition at Tanya Leighton Gallery, Day Before This Place, explores concepts relating to urban frameworks, collective conduct in relation to virtual or real spaces, and the myriad ways urbanism can influence behaviour. Curated by Tara Downs from Tomorrow Gallery, the artists presented in the exhibition revisit architectural components and explore products of urban movements.

Ben Schumacher and Carlos Reyes — “We may be wrong The first engineer of France has thrown bridges in the world” (2013), ice, Berlin television tower models, aircraft cable, paper, dimensions variable, courtesy of Tanya Leighton Gallery and the artists.

For the opening, Ben Schumacher and Carlos Reyes created ice sculptures situated outside the gallery entrance. Held together inside the ice was an exchange of text represented by speech bubbles with statements such as, “We may be wrong. The first engineer of France has thrown bridges in the world.”, and “We prefer a canal without locks. Panama has proposed massive canal lock.” Found models of the Berlin TV tower were also frozen within. Metal wires from the ice sculptures are attached to the exterior gallery wall, creating visible extensions into the gallery. The wire frames the structure of the space and all of the works within the exhibition. The relationship between major architectural projects and tourism is a common theme within Schumacher and Reyes’ practice. The ice sculpture imitates the conduct of tourists visiting major sites and their nature as temporary inhabitants. The tourist experience of moving through space is transitory but known architectural sites are given meaning through a constant flow of visiting tourists.

Pasted onto the entry door is the press release: a text by Dena Yago which is displayed as a work in the exhibition, entitled Chinese Woman Stuck Between Walls Mistaken for Ghost, Rescued 7 Hours Later. Yago reflects on her first encounter, last year, with a news story where a woman found herself trapped in a small alleyway on her way home from work and was thought to be a ghost by neighbours. Small passageways like this are consequences of the rapid growth within certain provinces of China. The story reflects the old mythological ideas and superstitious culture still embedded within a rapidly expanding modern China. Yago compared the situation to similar experiences encountered when entering buildings in New York City and getting trapped between a set of doors. 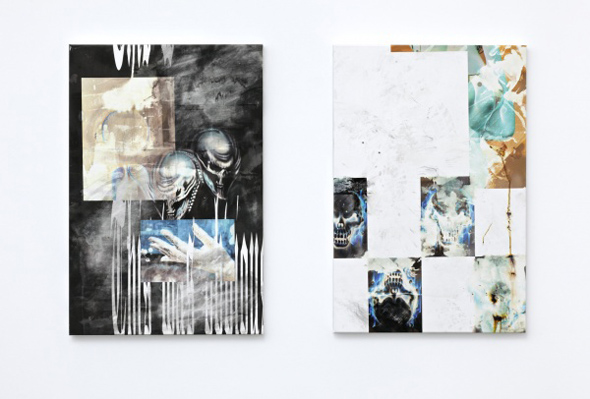 In Jason Matthew Lee’s graphic collages he combines a unique, deconstructed aesthetic with properties of digital reality, not usually seen in post-Internet work. The imagery within Lee’s works, neo:bruteforce/2Ci_f.inv.13 and bruteforce.annihilation_wlckr.13, are of inverted airbrushed-like skulls, abstracted gothic text and file names taken from Internet sites arranged along the side of the canvas. Small magnets, the kind harmful to computers, are attached to the canvas. Before the canvas is stretched Lee works through a process of degrading the images with de-graffiti solution and sullying the images with dirt. This process demonstrates a disruption of a usually more stylized Internet culture. The artist has appropriated and deconstructed the collected imagery from virtual reality and associated them with a specifically urban and aggressive ‘Ed Hardy’ style of fashion and design. The limitlessness of Internet consumption and virtual space allows for infinite mobility within the architecture of digital reality. 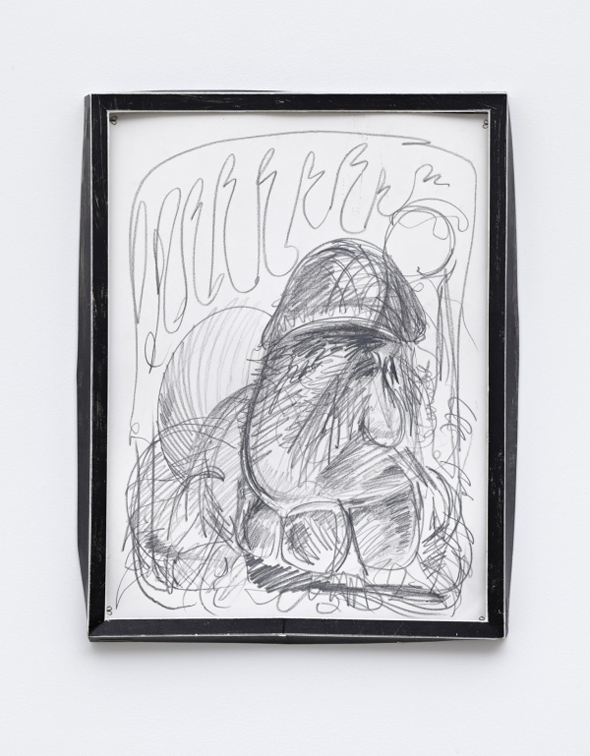 Alongside Lee’s work is Bradley Kronz’s Untitled, a sculptural drawing on paper inside a paper frame held together by paper clips. The use of these materials in this way suggests a throwaway or insubstantial quality to the work. The drawing is chaotic and abstract with aggressive lines, in stark contrast to the frail material used within the sculpture. This approach relates to a fixation with forms of preservation; Kronz’s method of building the sculpture communicates the amount of time the sculpture is intended to sustain.

Thin rectangular metal sheets fixed to the walls have morphed to take on a more gradual shape and color. Each object is of one piece of sheet metal, with cigarette butts disposed into the openings of slits or vents pointing upwards. These steel sculptures by Marlie Mul are titled Air Vent / Butt Stop (Smoking Suit) and Air Vent / Butt Stop (Lucifer Match) from her 2012, no odor series. The series is an example of functionality and communal reinterpretation of architectural components, outwardly highlighting minuscule traces of occupation within an urban space. The objects have a sense of being discarded and reformed throughout time.

The human fixation with architectural space has continuously been influenced by cultural factors and shaped societal behaviours. Day Before This Place, looks into the practice of space, attitudes towards architecture within urban settings, along with the manner in which people interact with and exist in space. As a result, occupying space becomes abstract, literal, longstanding, or temporary.

Blog entry by Jazmina Figueroa, an artist and writer based in Berlin; Thursday, Sep. 10, 2013.