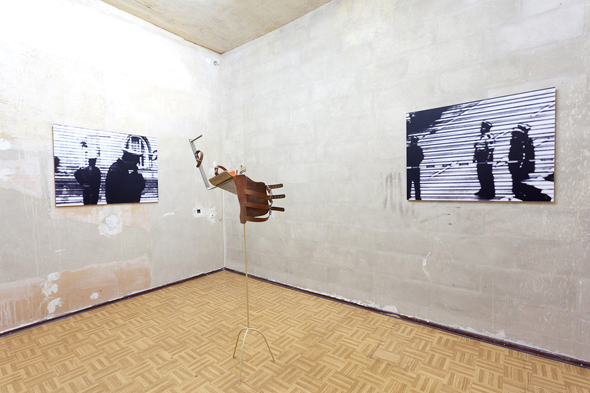 Modern utopian structures depend on technological developments to get closer to a perceived notion of the ideal society. In futuristic examples of a utopia, society is united by the idea of progress through technological advancement. In the current exhibition new atlantis at km temporaer the artists highlight specific technologies that originate from utopian ambitions. The exhibition explores the relationship between consumerism and production with existing technological growth and innovation. 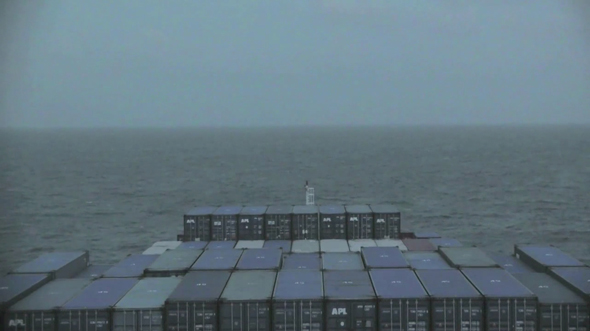 Anne de Vries’ work, Hold On, involves a steel railing that outlines the progression of a set of stairs along with a series of sporadically placed towels. Printed on the towels are the results of a web-based search for dates of the future. The information from the research was cultivated through auto generated web engines. The towels, slung over the railing, indicate an association with swimming and are symbolic of an intimate interaction with the human body. The flow of data in public virtual networks and the action of swimming become symbolically interlinked within the piece. 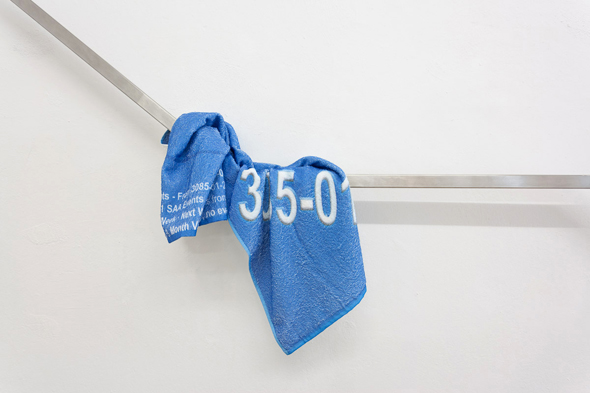 A mechanical sculpture sits in the centre of the room and is held in place by two traction cables. Luc Mattenberger’s Treuil (2010) looks to be from a futuristic sci-fi film. The object is fully functional. If the viewer decides to operate the engines this piece will work against the construction of the space and could tear down railings over the windows of the gallery. The work places the viewer in a position of dominance over the machinery and highlights the potential for destruction in all technological advancement. 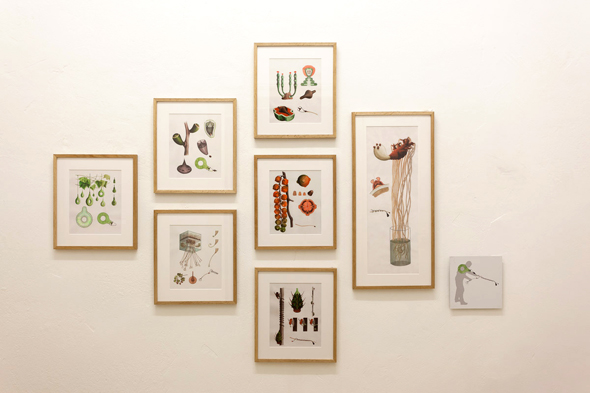 Mattenberger’s second piece in the exhibition is called Help for a Revolution. When a revolution occurs, concepts around utopia and societal goals become restructured. The sculpture resembles a harness and saddle made out of leather and metal with a straight metal pole that positions the object at arm height. The object is a tool that assists human posture, seemingly for military purposes. Sitting in a windowless room, the object also suggests a tool for torture. This posture correction device appears symbolic of both a new system adopted for progress and as a mechanism of control. 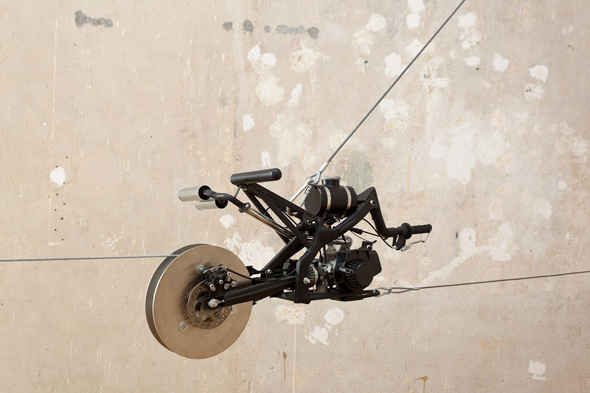 The video piece by Franisco Montonya Cazarez combines three narrative parts. Each sequence documents the journey of imported products into Rotterdam Port, the busiest container port in Europe. The first sequence, The Extension, is a filmic portrait of container ships at sea where goods are crossing national borders, symbolizing the networks that influence globalism. The Deconstruction shows the process of unloading containers at Rotterdam Port by self regulated machines. The eerie sequence conveys absolute emptiness as technology functions without the presence of people. The last section shows the artist throwing an apple into the water after completing their journey. Apples are a global product, readily available throughout the world, an object connecting diverse cultures though trade. The artist’s gesture implies a rejection of this system. The artist, by making the same journey as the imported goods, also raises questions around human migration.

Cyborgs in the Mist – Trailer from Stéphane Degoutin Gwenola Wagon on Vimeo.

Growth Assembly is a colourful illustrated series by Alexandra Daisy Ginsberg and Sascha Pohflepp that presents advancements of synthetic biology. Illustrated in a scientific textbook style, these fictional constructions of plant life propose new biological systems that would influence production, manufacturing and trade. Each plant model has been designed to be self-sustainable which would decrease the need to export and import goods around the world. These examples of imagined biological interference address the commodities of science and the interplay between the natural world, technological advancement and global capitalism.

The work in new atlantis links the state of consumerism within modern society to a fantastical idea of reaching utopia. But technological growth and developed societal states aren’t necessarily progressive. Technological advancement, and the consequent creation of new global products, may simply reinforce the status quo. The examples presented in the exhibition represent the progression of society, but such progression may only bring civilisation closer to an unrealistic idea of utopia.

Blog entry by Jazmina Figueroa, an artist and writer based in Berlin; Thursday, Sep. 13, 2013.