In the preface to their 1944 volume Dialectic of Enlightenment Theodor W. Adorno and Max Horkheimer wrote, while in exile from their native Germany: “We have no doubt … that freedom in society is inseparable from enlightenment thinking. We believe we have perceived with equal clarity, however, that the very concept of that thinking … already contains the germ of the regression which is taking place everywhere today.” That is, in short, the theoretical problem with which The Best of Times, The Worst of Times Revisited wrestles. Originally part of the 2012 1st Kiev Biennale, the seven videos chosen to be reprised at MOMENTUM Berlin offer a distillation of the biennale’s themes without the accompanying demands of seeing a sprawling and unwieldy biennale. At MOMENTUM, the works are given well-deserved time and focus. 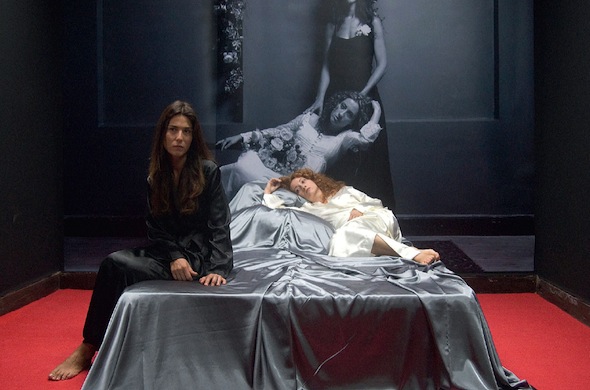 Curator David Elliott cites the oft-quoted opening lines of Charles Dickens’ 1859 A Tale of Two Cities in both the exhibition’s title and its press materials. Dickens’ novel, in its superlative juxtaposition of revolutionary France and contemporary England, dramatizes the problems of revolution that Elliott revisits in his program. Questions of fanaticism, sovereignty (both of the individual and the state), and temporality frame the novel, and provide a fruitful starting point in approaching these works, which in style and content are strikingly diverse.

The program begins with Lutz Becker‘s The Scream (2012), and in its initial silent minutes we encounter not one audible scream, but the silent screams of many: of machines of war, of marching men, of strewn bodies. Becker, who is a film historian as well as filmmaker, created The Scream with footage from the films of the late Ukrainian filmmaker and poet Alexsandr Dovzhenko, and set it to a haunting score by Thomas Köner. This is the stuff of history, to be sure, but not documentary–Becker has fashioned Dovzhenko’s work into a cinematic poem. In Becker’s deft hands, we experience the unknowable gulf that separates our time from Dovzhenko’s as layers of aesthetic mediation. Becker, who was born in Berlin in 1941 and was welcomed into childhood by a world that lay in ruins, is perhaps the best person to guide us. 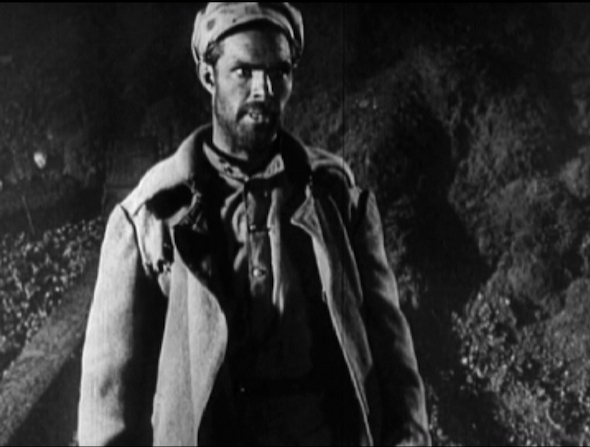 In contrast to Becker’s almost academic meditation on cinema, time, and poetry, John Bock‘s Monsieur et Monsieur (2011) presents a comical and absurdist scenario: the escalating hostilities between two old men who live and work in a shared office space. The structure and logic of Bock’s film is perhaps best articulated by the architecture within it. Inexplicable holes cut between walls echo the penetrating power of the camera lens itself, floors and ceilings are lopsided, and at any second the architecture of the place can be reconfigured. In one of its most memorable moments, one of the old men lies down on the carpet for a nap. Seizing his chance, the other cuts the outline of a penis from the carpet and lays it over the sleeping man’s torso. This is perhaps the only subversive use of industrial strength office carpet that I have ever witnessed. 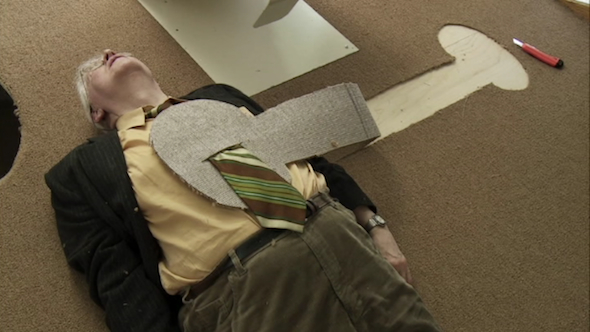 Doubles and doppelgängers appear again in Gülsün Karamustafa‘s Insomniambule (2011), which follows two female characters, one plagued by insomnia and the other by a penchant for sleepwalking. Like in the films of David Lynch, the settings seem to be an extension of the characters’ subconscious: a dark luxurious bedroom, a foreboding hallway, an empty garden. There are strong echoes of the uncanny characters and eerie sets of Lynch’s Twin Peaks and Mulholland Drive. Of course, the power of the uncanny is that, in the final turn, what is revealed is what we already intimately know.

Tracey Moffatt‘s Doomed (2007) made in collaboration with Gary Hillberg is, like Becker’s The Scream, a montage of other films. Rather than delving into the oeuvre of a single filmmaker, Moffatt brings to our attention scenes of destruction and apocalypse from movies that already, in some way or another, litter our cultural memory. There is Helen Hunt and Bill Paxton escaping the destructive path of a tornado in Twister (1996). There is the sinking of the Titanic, the crumbling of the Golden Gate Bridge, the countless cinematic takes on the downfall of New York City. These moments of destruction and fear are taken for granted as elements of the craft of cinema. We watch from the safety of our movie theater seats how others have imagined our end. Moffatt has plucked these moments from their narrative context and set them to a soundtrack befitting dramatic and heroic cinematic moments. Yet in combining soundtrack and montage, the effect is strangely festive: the end of the world is near (or perhaps has already arrived) and you are invited to the party.

Alternatively festive and elegiac, deadly earnest and eclectically wry, there is nevertheless a sense of urgency, if not in content then surely in context, that unites these works. Faced with the fragmented and haunting elements of our past, how do we construct a future? Can we yet salvage the Enlightenment ideal of the rational, sovereign individual in a postcolonial and postmodern world? Yang Fudong‘s lush and stunning The Nightman Cometh (2011), which loosely follows the wanderings of an injured warrior who must decide whether to persevere or cease his battles, leaves us with this final view: the warrior riding inexorably forward into the snow-covered landscape, pausing only for a single look back.