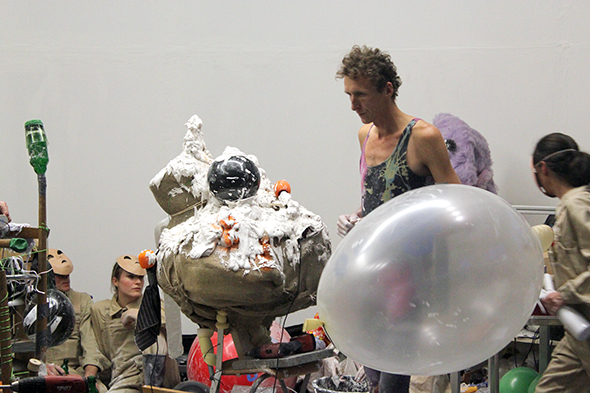 It takes a certain bombastic spectacle to resign to the background the impressive panorama afforded by the architecture of the Schinkel Pavillon. The cacophony of colour, form, movement and sound performed by the Austrian collective Gelatin managed to achieve this unlikely task.

A half-cylinder had been erected in the polyhedral hall of the Pavilion, the stage for a scene that resembled an absurdist, post-apocalyptic bunker. Milling about inside was a motley ensemble of performers sporting furry skirts, yellow berets, gaffa tape, and fake tits, drinking beers and stepping over the network of cables littering the floor. Largely disinterested in the audience that had gathered, they were focussed on interacting with the strange, deconstructed objects and hessian-wrapped furniture in the space – all decidedly makeshift and inelegant, an aesthetic counterpoint to the Pavilion’s architecture proper. There was drilling, sawing, and dismantling of objects; a flurry of anarchic, non-teleological activity, wherein play and freedom trump any sense of order. 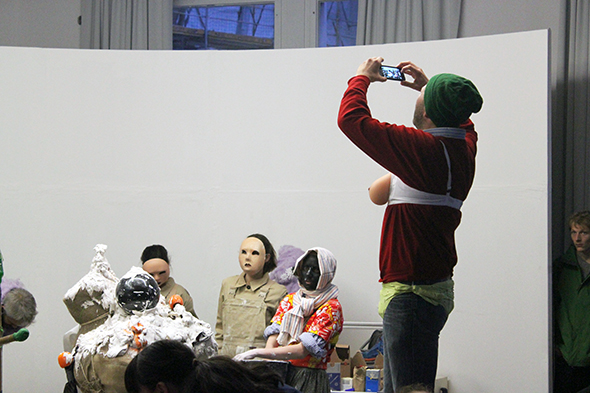 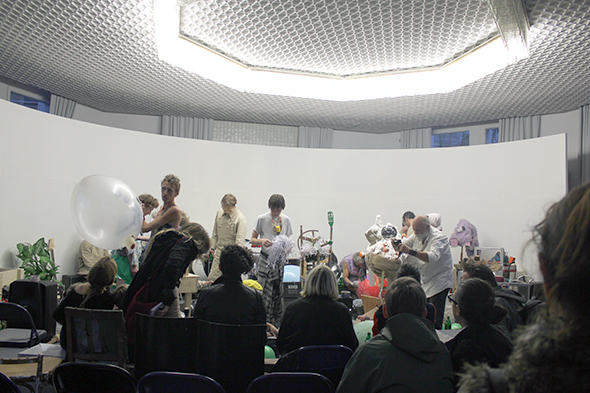 Supporting them was an army of ‘technicians’ in beige overalls and flesh-toned masks, largely preoccupied with the musical instruments and electronic equipment scattered on the floor, and producing a droning sonic chaos to match the visual one. I’m a fan of drone music, and the layered, industrial noisescape they produced was making my ear-cilia vibrate in just the right way. Regardless of my predilections, another musical genre would probably have jarred with the chaotic scene that presided. Some of the performers were handing out filled green balloons to audience members. Given the clumsy-happy state of the performers and crowd, I had my suspicions about whether those balloons were in fact filled with nitrous oxide.

There were occasional ‘punctums’ of attention in the dispersed and chaotic scene – the dramatic dripping of wet clay on a sculpture, for instance, or the sounding of an air raid siren – but for the most part, the eyes drifted over the constantly changing scene, picking up and letting go actions and movements rapidly. 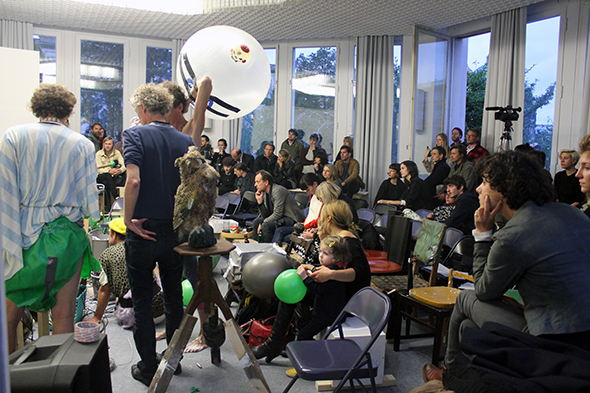 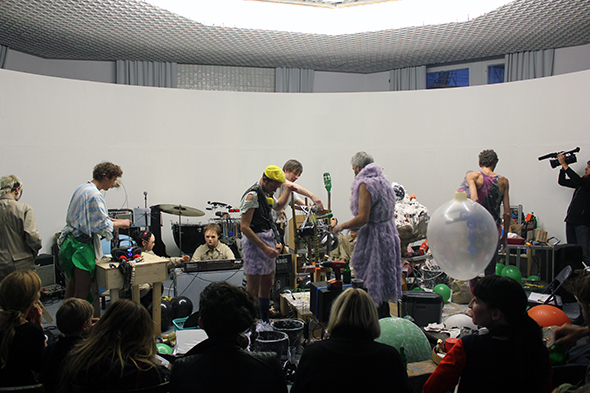 Each of Gelatin’s happenings – and there’s a different one imagined and enacted every evening over the four day period – arises from a lengthy discussion and deconstruction of the idea of sculpture with a different set of artists, from which arises (something like) a set of guiding principles or symbols for action, and for the construction of objects. This particular evening represented a performative ‘collaging’ of ideas and forms drawn from a discussion with the artists Michael Sailstorfer, Thomas Zipp, and Kris Lemsalu.

I would simply be hazarding guesses at what aesthetic forms and movements these deconstructive talks gave rise to – but guessing is fun, so let’s try! The balloonic shapes which appeared – both in the form of some of the constructed sculptures and in the performative distribution of balloons to audience members – were (surely?) a reference to Zipp? Lemsalu – the fur, the fleshy masks? Sailstorfer – found and industrial objects? No doubt I’m being crude and imprecise in an attempted reduction to recognisable symbols, but ‘deconstruction’ was in the title of the work, after all.

I spent a solid hour with the performance, having surrendered to the unfolding process of transformation, and having fun with it along the way. Don’t go searching for a narrative, the story is in the chaos. 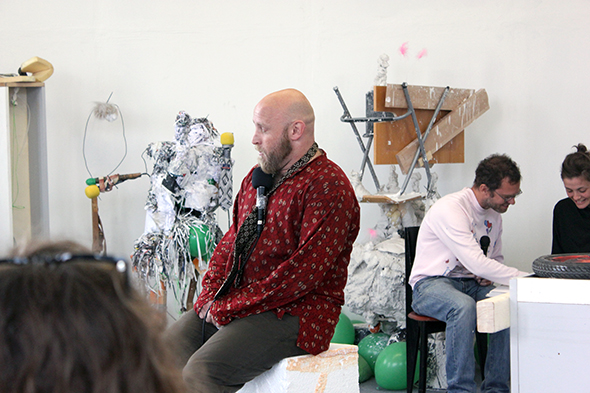 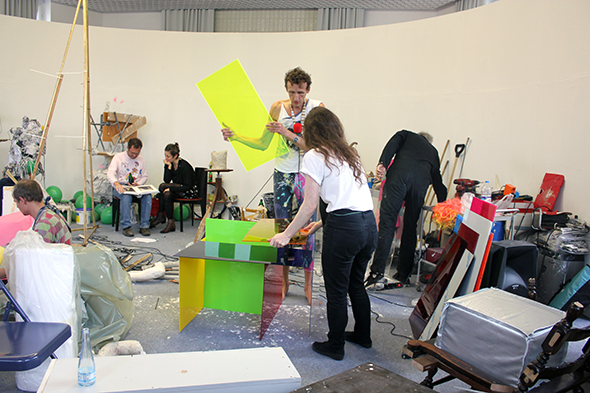