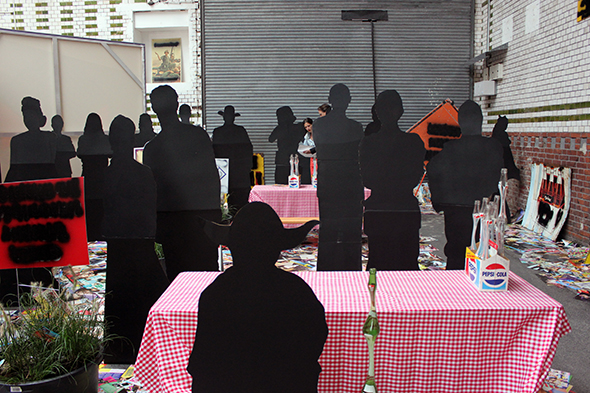 The sixth edition of art berlin contemporary (abc) showcases the work of artists from over 130 international galleries. As ambitious as that may sound, the event is not your typical art fair: abc consciously strayed from the jam-packed booth format, giving artists and gallerists free-reign on how their works were presented. While Berlin Art Week’s official program has focused in large part on the four-venue ‘Painting Forever!’ exhibition, abc’s display was, by contrast, predominantly made up of site-specific installations, sculptures, performances and video work. 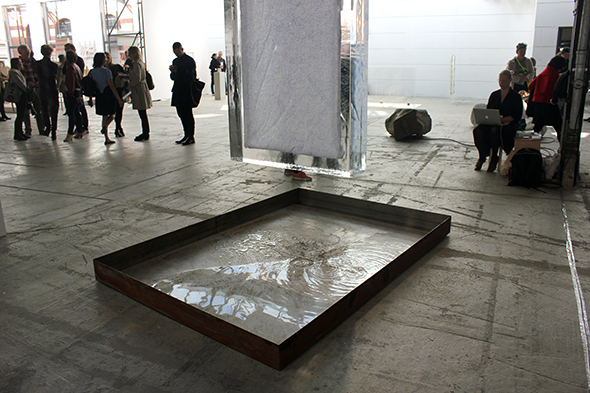 The traditional painted canvas is mostly absent from abc this year. Paula Doepfner’s time-based installation I Need a Little Sugar – presented by Galerie Tanja Wagner – provides an interesting microcosm of the event’s general approach. Her piece consists of a canvas, scrawled with handwritten neuro-scientific notes and encased in a large cube of ice. Over the course of the exhibition, the ice melts into a metal basin below, which changes to a red-orange colour through oxidization. Doepfner’s piece unintentionally proposes that the painted canvas is perhaps, at this juncture, an archaic medium, frozen like a pre-historic artifact amidst the dynamic commotion of the exhibition hall. 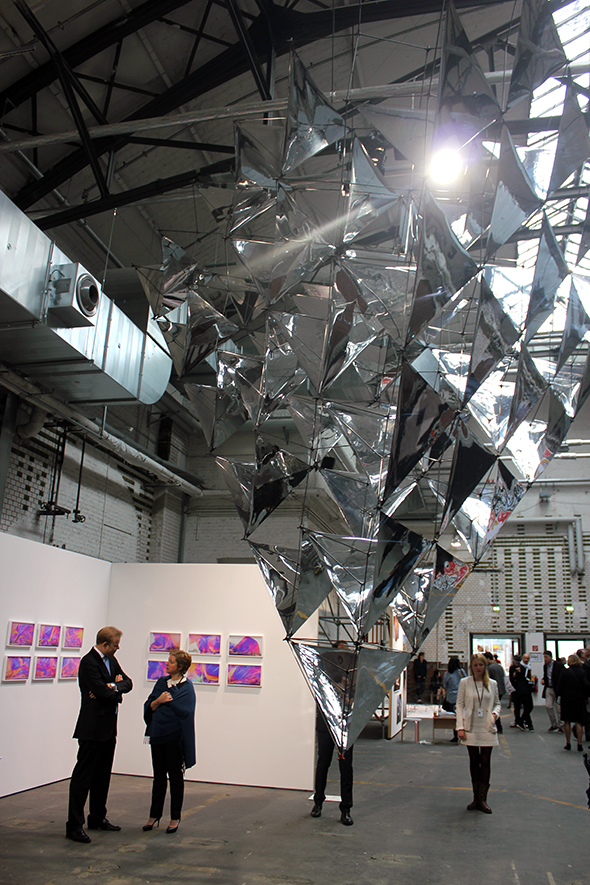 Instead, visitors are more likely to come across installations like Tomas Saraceno’s Solar Bell, a massive kite made of carbon tubes and paper-thin solar panels. Inspired by Alexander Graham Bell’s 100-year-old design for a ‘flying machine,’ the kite was constructed in consultation with members of the Aerospace Engineering Faculty of Delft University. In a similarly scientific vein and located just across the hall from Saraceno’s kite is Julius von Bismarck’s Experiment Among Circles for alexander levy. The installation is two lamps suspended from the ceiling, hanging on moving pendulums. As they swing in a circle, it begins to seem as if the room itself is swaying slightly in a breeze that no one can feel. These scientifically motivated works attempt to harness patterns of nature in order to bring them into contact with our daily, lived experience. (Another strikingly similar example of this kind of work can be found at the architecture exhibition ‘Das Numen Momentum,’ opened last night at the Deutsches Architektur Zentrum). 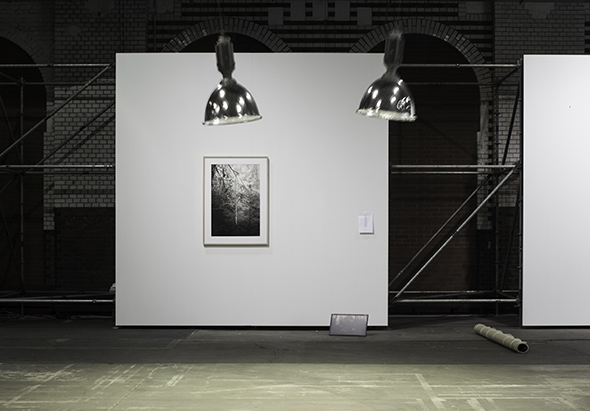 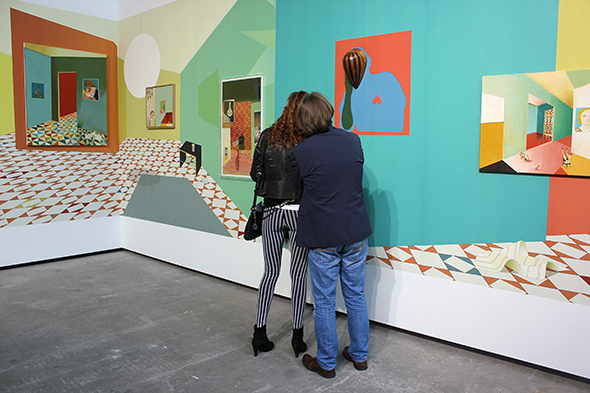 At the far end of the exhibition hall, one of the few examples of an eye-catching, painted work is mounted in a corner section. Jens Fänge’s ‘Das Schauspiel,’ presented by Galleri Magnus Karlsson of Stockholm, is a multi-coloured, perspectival assemblage of never-ending theatre interiors. The huge work is visible across the great hall and almost appears as an extension of the room, into new, wildly decorated enclaves. 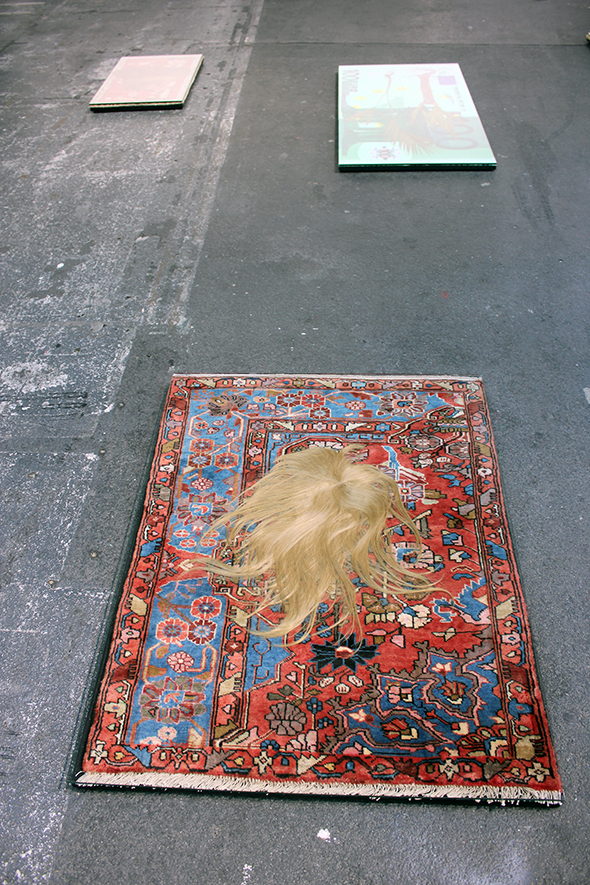 And on the theme of interiors, Nina Beier’s strange Wagireh rugs, to the right of the fair’s entrance, offer a surreal twist on traditional handicraft. The hand-woven rugs, shown by galleries Croy Nielsen (Berlin) and Proyectos Monclova (Mexico City), are topped with real hair wigs and compressed under sheets of glass. The objects are arranged to resemble pictorial compositions, made up of materials signifying work and leisure, time and money.

A personal favourite and somewhat of a ‘hidden gem’ at abc this year was Pauline Curnier Jardin’s short film Grotta Profunda, les humeurs du gouffre,’ presented by PSM gallery. The film is a costume designer’s dream: a hairy, braided fish-woman (Merbraid?), a giant, carpeted, walking hand, and an S&M leather wearing, backwards walking spider woman are just a few of the visionary creations. The film tells the story of Saint Bernadette’s religious ecstasy and her adventure into the dark cave of human origins, where she meets unfathomable creatures that unravel a complex tale, enhanced by an eerily sung narration.

In addition to the massive exhibition halls at Station Berlin, this year abc introduced ‘Upcoming Exhibitions,’ an initiative by Shanaynay (Paris), in which 14 international project spaces present an exhibition every two hours in the foyer of the building. The widely varying contributions to abc’s exhibition make for an exciting program. This year, many of the galleries produced imaginative responses to the more open-concept art fair that abc has to offer. 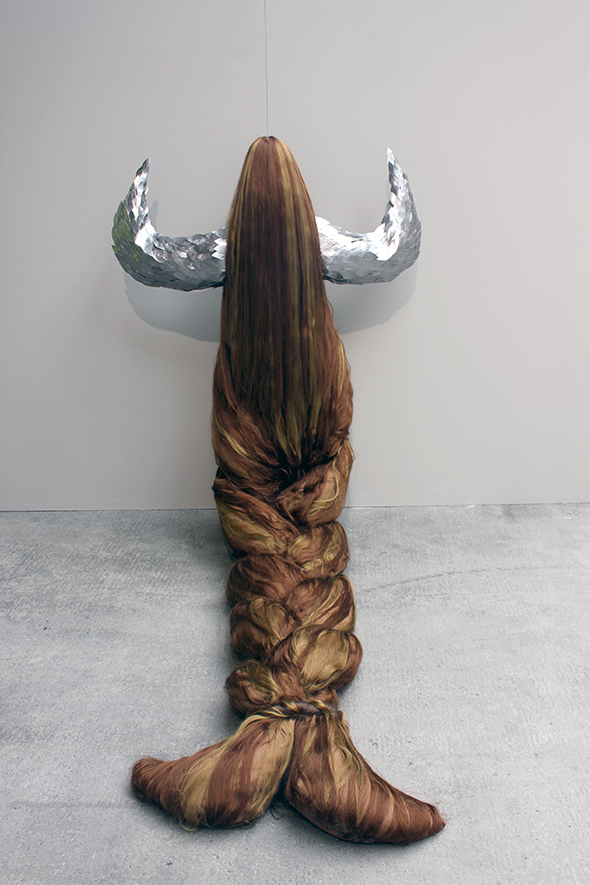 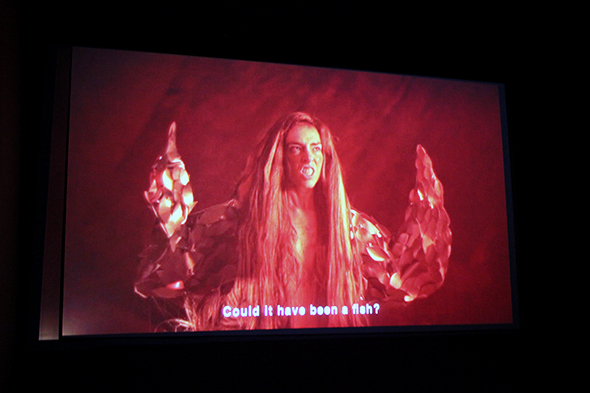