A ten-minute walk from S-Bahn station Pankow-Heinersdorf, behind rows of quaint German houses with front gardens, I find the studio of Katharina Fengler in a place that feels nothing like Berlin. Tucked away in this obscure corner of the city, its windows look out across a vast gray sky, untamed clumps of trees, and a barren field with concrete peeking through weeds. The space is tidy, yet relaxed and uncomplicated; I spot a Spiderman pencil case next to a stack of thick books with long German titles. These elements of her studio reflect Fengler’s own contrasting personality. Soft-spoken yet direct, she is complex without taking herself too seriously. One moment she is explaining psychological syndromes and ancient symbols that inspire her work, the next moment her phone rings and she looks down at it. “That’s my job,” she laughs, “I knew they would call me when I have a Studio Visit. Forget them, I’m an artist dammit.” 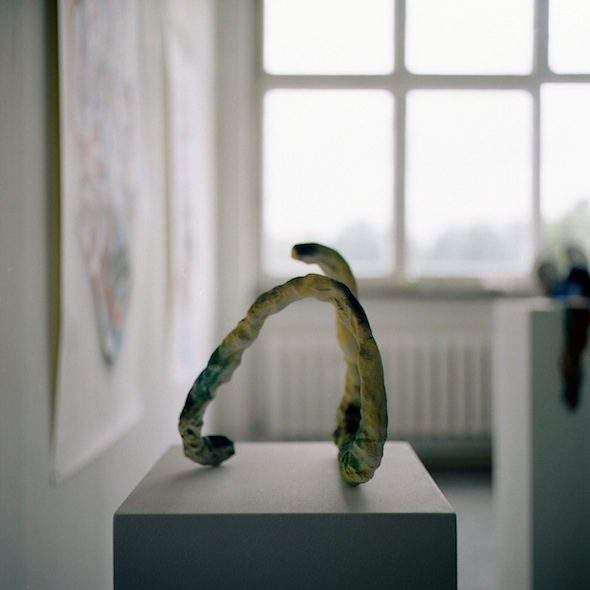 Fengler didn’t always think she would be an artist; she wouldn’t have allowed it. She was drawn to art, but being an artist was not realistic. She decided to study photography, the closest thing to an art degree while still being practical. Her first works as an artist used the medium, but in a conceptual rather than technical way. Using a very basic camera to achieve an unprofessional look, she took portraits of mundane subjects and everyday scenarios––Christmas with the family or a group of girls taking a ‘selfie’––all blown up with satiric exaggeration and hung in fluorescent frames. 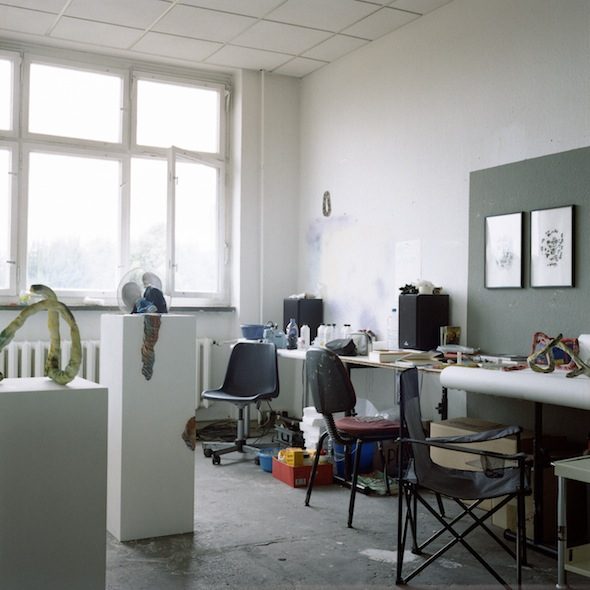 This was just getting her feet wet; what she really wanted was to paint. But the stigma attached to painting was intimidating, especially with its rigid academic history, particularly in Germany. She began slowly, creating small inkblot drawings that appear almost tribal, archaic and ritualistic. This was a gesture intended to erase everything she had learned about art history at school. Island of Kindness––a series of 333, inkblot drawings reminiscent of skulls––were a way of regressing, allowing her to work in a less judgmental way. 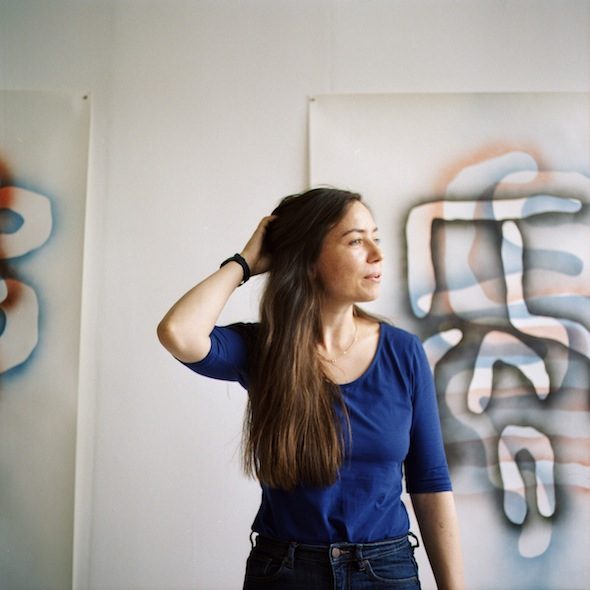 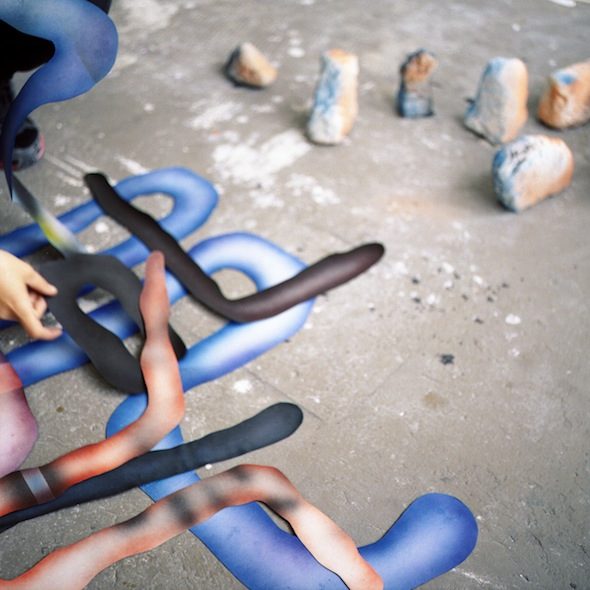 Her most recent works reveal new sentiments towards painting and color. Her new series incorporates neon airbrush paintings and sculptures that appear to have fallen out of the painted surface, squirming away yet held in frozen motion, mimicking similar movements in the paintings. The fuzziness of the airbrush and lightweight quality of the watercolor creates a delicate transparency, adding an almost digital quality to the paintings–their flat surfaces become somehow three-dimensional. In dialogue with one another, the pieces show a perplexing conflict between space and tangibility, one moment amorphous, the next curiously representative. 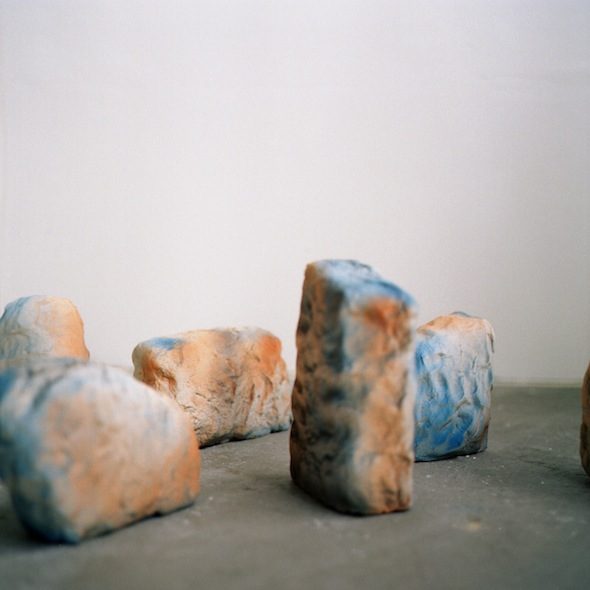 Fengler consciously chooses materials that at first glance may seem rudimentary; their elevation or exaggeration is what characterizes her work. In her series, Unused Potential, Fengler uses salt dough–a material usually associated with early childhood crafts. Fengler pokes fun at this self-help book notion of “unused potential”, referring to a time in life when hopes for potential are high, while elevating her low-tech creations to high art. By using an airbrush to paint, Fengler connects her process to “low-culture” creation. 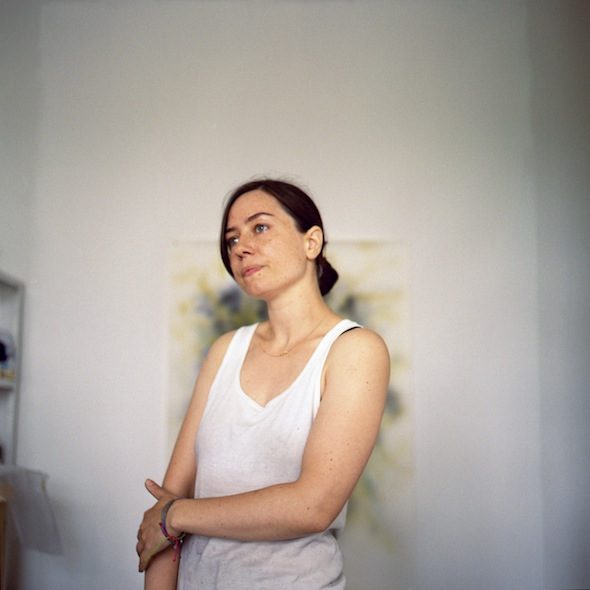 Though the results look simple, the process of using an airbrush is not. Each gun holds only a small amount of paint, and must be constantly reloaded, disrupting any chance to employ the more spontaneous and intuitive processes of Fengler’s previous works. She cannot work as fast, so she has learned to control certain parts, and let others lapse back into a kind of venting-process. A lot of time goes into the design, once one color goes on, it can’t be taken back or covered up. Fengler uses a collection of stencils to create both the filled figures and the gaps for further color, achieving an intriguing dimension that is almost hallucinatory. Sitting comfortably behind the humming gun, she explains how she taught herself how to use the tool and is still learning. She intends to continue using it, exploring its many directions, and perhaps bringing photography back into her process sometime later. 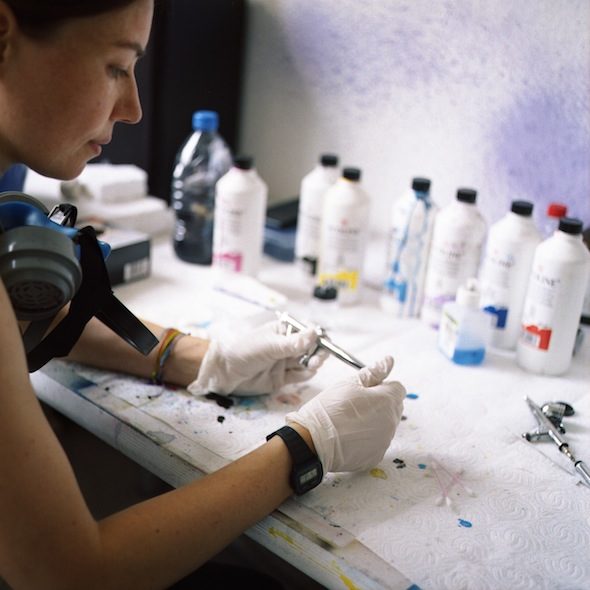 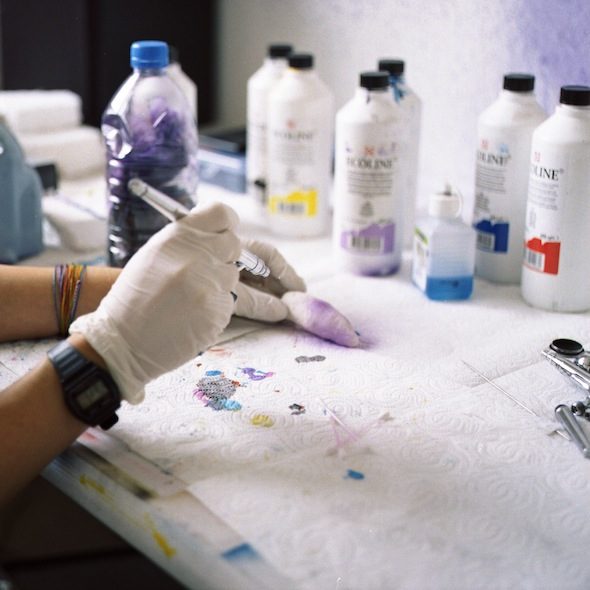 It is this possibility to go in many directions that makes Fengler’s work so interesting. When asked about meaning, she tells me that her works search for meaning, rather than create it. Her paintings and sculptures play with materiality, interpret symbols, and layer thoughts and stimulations. Her work titles open up what she calls a parallel world. The names come from a multitude of sources—they may be something she likes, or that bothers her, something she has read or collected somewhere. The names bear a random association with the work itself, but one that opens up new possible meanings. 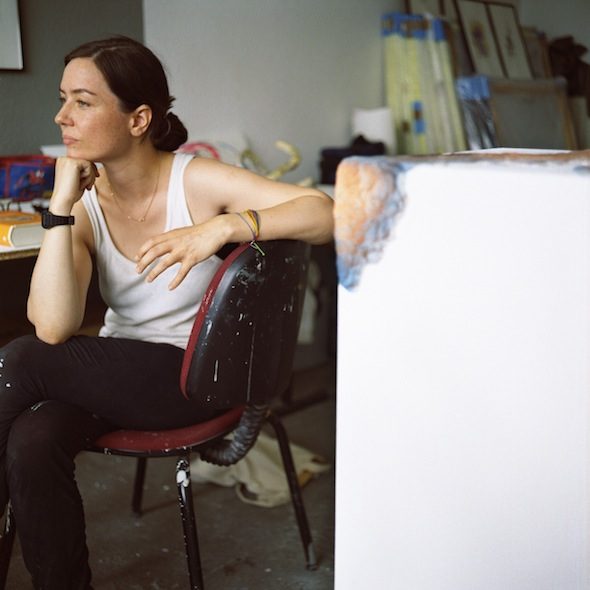 The works of Katharina Fengler are like the Uroboros, an ancient symbol she cites as a source of inspiration; a serpent eating its own tail, it symbolizes cycles of constant recreation. Fengler’s process is also one of constant recreation, creating layer upon layer, she stretches a material to its limits, but in a way that suggests a cycle or regeneration rather than finality.