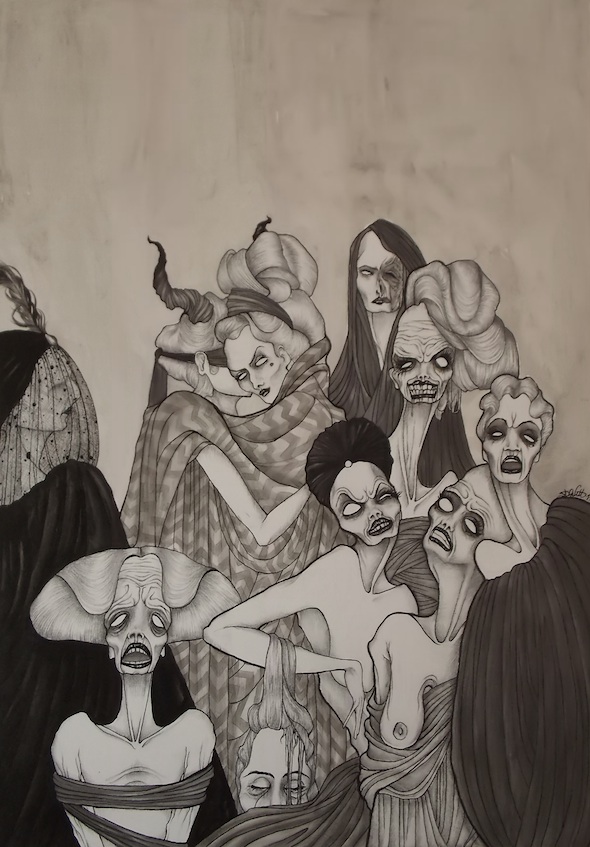 As supermodels and fashion designers elbow their way to the top and high glamour swamps New York, and as spotlights illuminate the most beautiful and famous people of the world, a small gallery in Chelsea is showing an exceptional Italian artist who depicts our contemporary society and especially the fashion world from the other side of the coin.

Skewed faces, distorted bodies, skinny women, and sad eyes. Empty landscapes and references to ancient worlds. Daniele Davitti’s paintings and drawings, mostly realized with watercolors and Japanese ink painting or calligraphy, depict today’s society through a body of work that has been developed under a number of different cultural influences. In his grotesque figures we can identify Renaissance paintings and frescos, Japanese prints and illustrations, and fashion design motifs, as well as strong references to Modern Art in the sensibility of Goya and De Chirico. Equally important are 18th and 19th Century influences, from classical music to Art Nouveau. Their cultural and artistic manifestations complete Davitti’s very personal and remarkable style.

Davitti’s images address narratives about the beauty of decay, the loss of identity, and the struggle for resurrection from a past that keeps holding its shadow over the present. His works are born out of his deep reluctance for the synthetic and false beauties that our society classifies as ideal. He calls them “beautiful containers without content” while puckering his face. The roots of his critique grow beyond the realm of shiny pictures of the haute couture world. As the youngest fashion design professor in Italy (he teaches at the Polimoda and IULM), he offers insight into what the fashion world means today to the future generation of creative fashion makers: “I must sadly admit that most of my students start school without having any dreams to pursue, without any critical thought and little passion. In a country where past and present riches are threatened by an economic crisis and neglected by a corrupt and too often ineffectual bureaucracy, people don’t believe in the future anymore and seem to live in an eternal apnea.” Enriched by sumptuous patterns, sophisticated symbols and crumbling architectures, the composition of Davitti’s paintings and drawings display the human species on a dramatic stage.

He gleans inspiration from artists of the first half of the 20th century – Gustav Klimt, Egon Schiele, and the Expressionists. The tragedy and comedy of those times play a substantial role, merged with his own experiences in Asian countries where he spent some time studying Japanese calligraphy, engraving, and textile design. 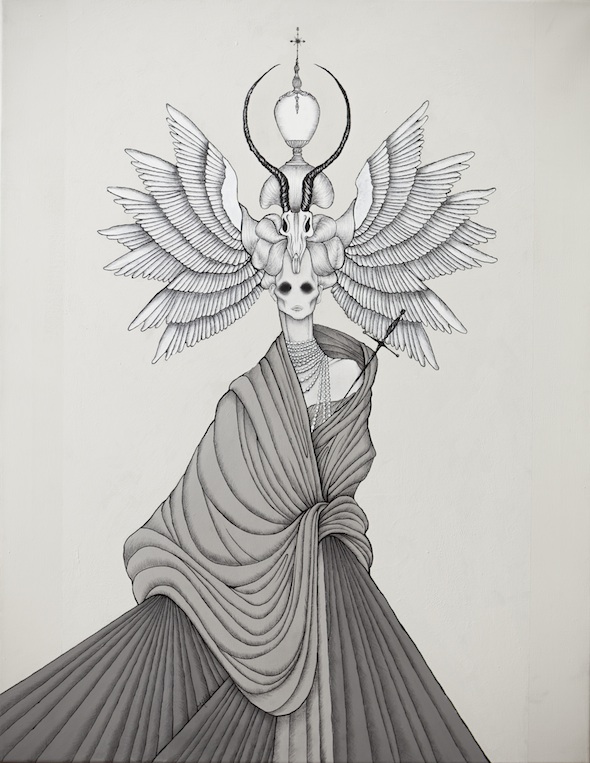 Caterina, a princess with a winged hat decorated with death-symbols, thus welcomes us at the entrance of the gallery, setting the tone for the entire exhibition. Her voluptuous body is wrapped with precious fabrics in contrast to her sharp facial features and vacant stare. It seems as if she has emerged from former times to keep order over the evolution of today’s beauties.

Elder women, with Geisha-like heads, denude in front of the spectator (Corhabeo). The headpieces remind one of archeological relics, while the dresses combine clear references to Japanese / Roman times and contemporary stylists such as McQueen, Galliano, and Balenciaga. The transmission of decay and suffering creates a strange excitement in the audience. 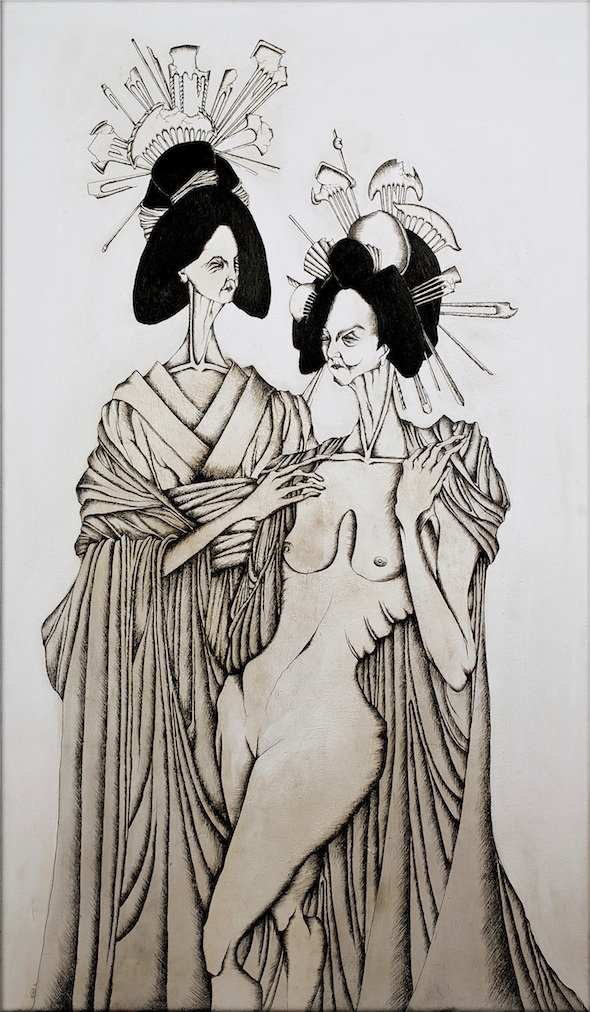 “Infelici Stanze” is a group of Vampire-like women whose faces beg for affection and attention, whose gestures convey an attachment to a glamorous but fake world. With their captivating and aggressive glances they bewitch the scene. We can recognize famous models from the ’50s like Suzy Parker and Lisa Fonssagrives, as well as present celebrities like Belen Rodriguez, Kim Kardashian and Snooki. Other works are portraits of lonely existences or imaginary romantic scenes in daily life. Love and seduction, suffering and mistrust, history and heritage are rarely absent in his paintings, drawings, and illustrations of different scales.

Daniele Davitti thus introduces a complex sensitivity to the social and political sphere within the fashion industry. The beauty of his works is coupled with a deep criticism of the superficiality and unease with which our contemporary society hides behind that facade of coveted glamour. 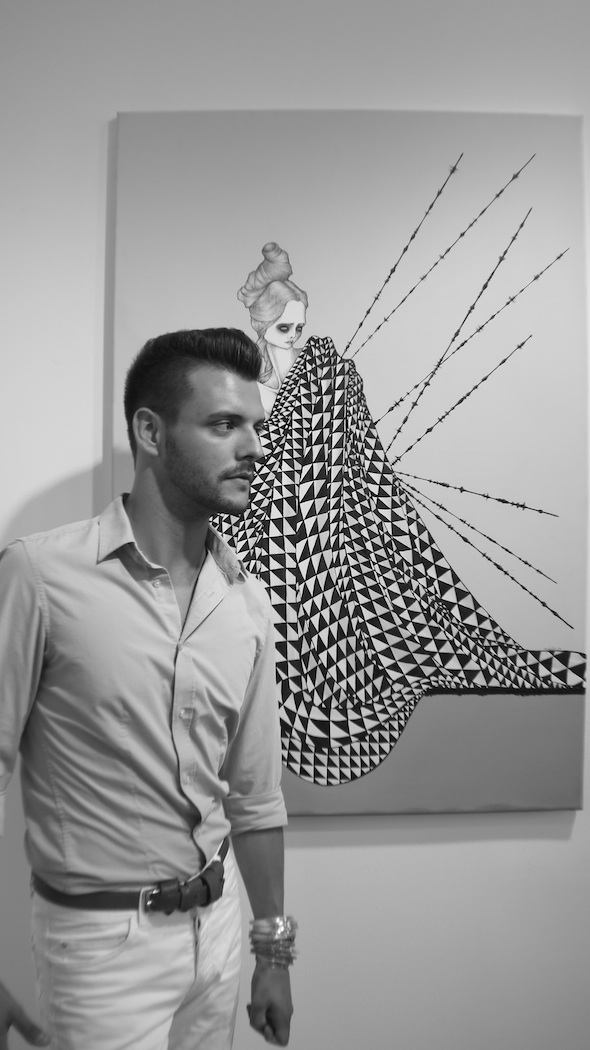 Sarah Corona holds a BA in Fine Arts and a MFA in Communication and Management of Art (University of Bologna). Based in New York, she works as independent curator, art historian and journalist for international art magazines with a focus on the intersections between technology and art. www.sarahcrown.com