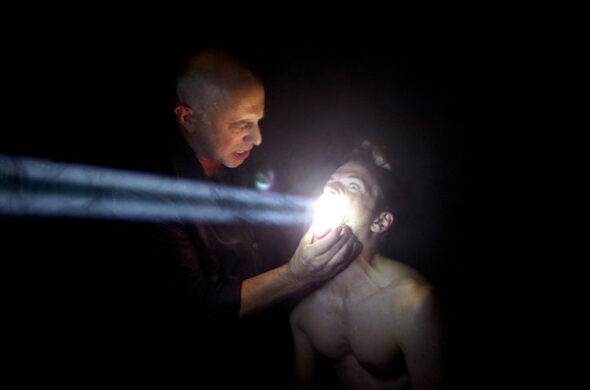 A famous story about Richard Wagner tells of the premier performance of his opera Der Ring des Niblungen (sometimes called The Ring Cycle, completed 1883). As the story goes, after one of the arias an old man in the theatre, particularly moved by the singer’s performance began to clap. This is a huge faux pas in Wagner-lore, which decrees that the audience must hold their applause until the conclusion of an act, for fear of shattering the opera’s intricately spun fiction. The audience were suitably offended by the old man’s clapping and had him ejected from the theatre where it was only later discovered that the old man was Wagner himself. It’s a nice (though likely apocryphal) allegory for the way in which Wagner the man came to be subsumed by Wagner the myth, to the point where the former was powerless in the face of the latter. The son kills the father. Everything is very operatic and laden with symbolism.

Ring – Landschaft mit Bierstrom (2013) is a staged installation produced by Austrian artist and composer Georg Nussbaumer and Solistenensemble Kaleidoskop that takes, as its conceptual starting point, Wagner’s epic Ring Cycle. In Nussbaumer’s installation each of the Ring’s four acts (traditionally performed on four consecutive nights) are treated as a single durational work stretching out over sixteen hours with audience members free to enter, exit and walk about the set as they would in a gallery setting. Wagner’s original notation forms the core of the work but it has been “stripped of singers, text and representation and dressed by the soloists of Ensemble Kaleidescope.” (translated from the program notes). 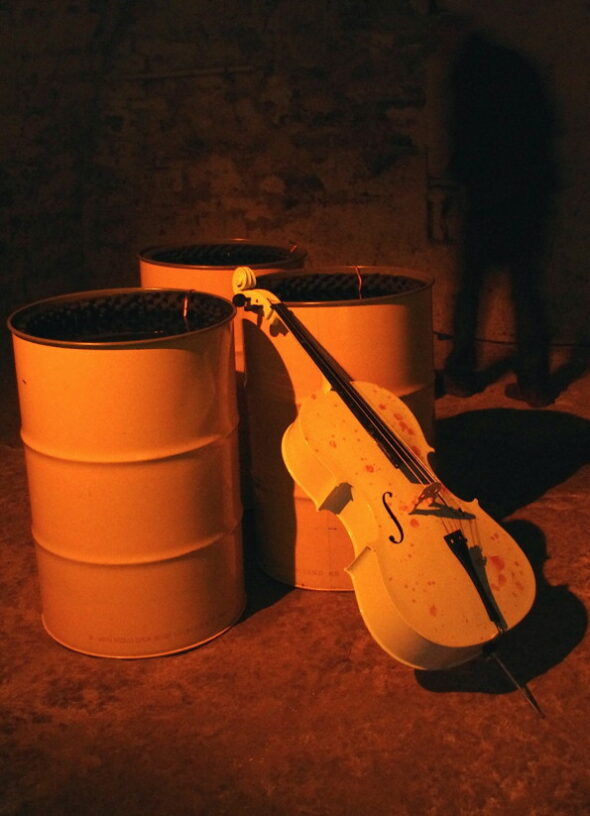 Nussbaumer’s piece is staged for ten solo strings (two violins, two violas, four cellos and two contrabasses) who play from ten raised platforms, each strewn about the space of the St. Johannes-Evangelist-Kirche in Mitte (although the performance was programmed by Sophiensaelle). The ensemble play quite freely from a piano reduction of the score, mixing percussion and noise material in with Wagner’s leitmotifs while electronic sounds shift tectonically through the space. Recordings of singers from the original opera form part of the installation as well, but they issue forth from special speakers submerged in barrels filled with water so that they are only audible to audience members prepared to dip their ears into the drums of water.

Exploring the effect of long durations on both viewer and artist has been something of a trope in performance art for some time now, and it has a small but interesting tradition in contemporary classical music as well. Amazingly, in Nussbaumer’s work, the same ten players manage the entire sixteen hours (with a few staggered breaks). What must be a gruelling experience for Ensemble Kaleidescope — particularly their pregnant violinist – takes on a kind of zen magnetism for the audience. The longer one stays, the more one begins to sink into the installation’s sound world and the more amplified every subtle shift becomes. Originally, I had planned to stay only one or two hours but I quickly found myself cancelling my evening’s plans and settling in for just over seven hours in total. Time here seems to bunch and smear so that the interior world of the work comes to dominate one’s consciousness and to step outside seems like an impossible jolt to reality. 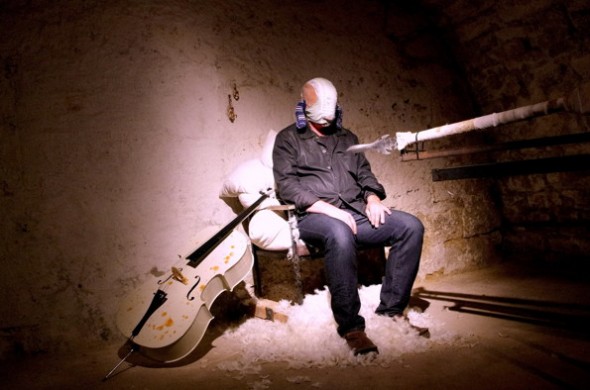 An important concept here is the Gesamkunstwerk, a concept first sketched out by Wagner. In opposition to what he considered the disjointed and overly showy operas of Italy, Wagner sought to create an aesthetic for German opera which synthesised the elements of the genre — music, text, set, drama etc – into a unified statement of artistic truth. Wagner’s views on the role of art were lofty. Drawing from the philosophy of the German idealists, Wagner sought to elevate art to a kind of religion (and himself to a kind of god). Reviews of Wagner’s original performances speak of the ‘intoxication’ of being completely swallowed into the mythic fictions of his opera.Gesamkunstwerk is a seductive concept for any artist, but a dangerous one as well. Its ideal of ‘a unified message’ is all-too-often manifest as a mechanism of control – allowing the artist to tightly censor and manage the reception of their work. By its very nature, Gesamkunstwerk negates the multiple perspectives of the audience, in favour of a fixed ‘meaning.’From such a top-down and tightly controlled means of artistic communication, it is no huge leap to political propaganda and it is hardly surprising that Wagner’s music would come to be so extensively co-opted by the Nazis for their political purposes.

Nussbaumer’s adaptation still employs elements of Gesamkunstwerk but it does so through a post-modernist lens that acknowledges the polemics of the concept. There is a sense of totality to Nussbaumer’s installation (in that everything within the set – audience included – are subsumed by the scope of the work) but unlike Wagner, Nussbaumer’s totality is not one of fiction but one of fact. Here, every element of the work (the bare scaffolding, the smoke machines, the stage hands moving constantly through the space) work together to expose the artifice of Wagner’s grand fiction. The audience is actively repelled from ‘believing’ the work. 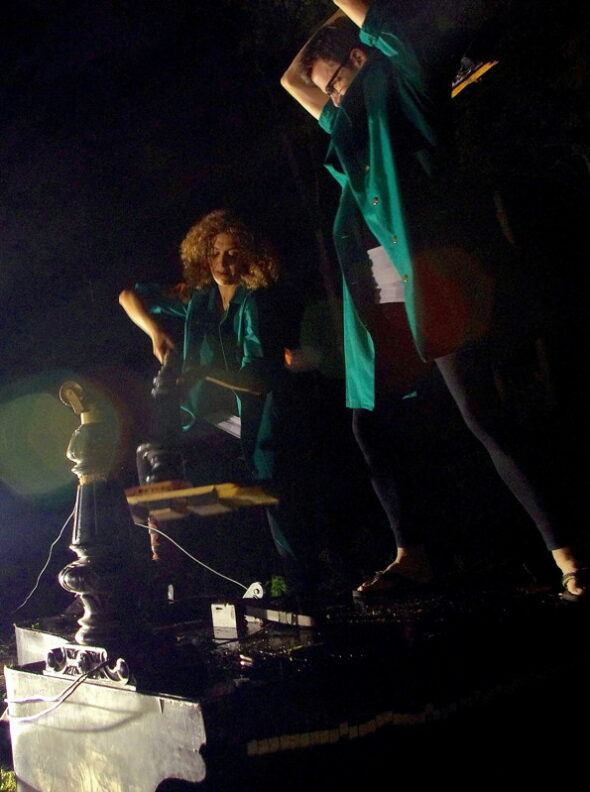 Despite Nussbaumer’s resistant stance against the original opera, there is a hint of empathy for Wagner here as well. At several points throughout the installation, the ensemble abandon their instruments and take up slide projectors, methodically working through a series of family snaps from Nussbaumer’s upbringing in Austria. What at first seems like another sarcastic dig at Wagner, connecting his grandiose worldview to the idle nothings of a bourgeois vacation, gradually reveals itself to be something more sincere. Wagner’s dogged belief in the power of art is Nussbaumer’s childhood naivety too.

For anyone looking to attack musical meta-narratives, Wagner makes an easy target. It is all too easy to forget, however, that amongst the composer’s vile politics and anachronistic world-view, there are moments of sublime beauty. To focus on Wagner’s beauty and ignore his politics is dishonest, but to do the opposite is a great shame. It is in acknowledging these two contrary sides of Wagner that Nussbaumer’s installation finds its success. In attacking the myth of Wagner, Nussbaumer has allowed the man’s music to speak for itself. The moments of real beauty here are still Wagners, but they sound clearer here, through Nussbaumer’s smoke machines and electronic noise than they do amongst Wagner’s polemics.