This is part one of a two-part series. Parts 1 │ 2 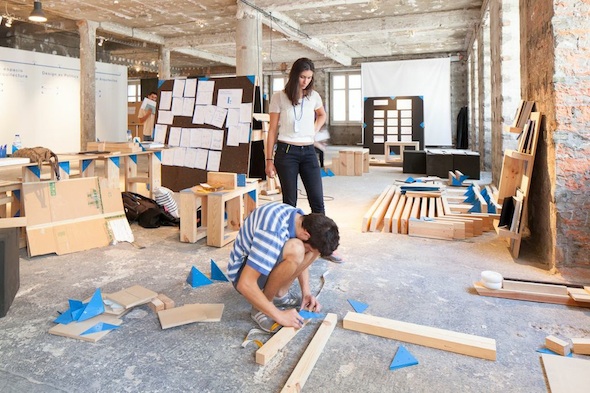 The recently opened 2013 Lisbon Architecture Triennial, Close, Closer, aims to question the borders of the discipline, open it toward immediate civic use and a reactive criticism and distill the comprehension of architecture into that of a vital spatial practice correlating to the everyday. With its luxurious and deserted charm, the 18th century Palacio de Sinel de Cordes – a long abandoned villa in the center of Lisbon, donated by the City Council as part of a larger project to repurpose some of Lisbon’s heritage – acts as headquarters of the Triennial, while 3 exhibitions and a public art program happen around the city.

The following interviews, conducted before the official opening, reveal the process of setting an agenda, tracing content and analyzing the context to which the biennial is supposed to respond. Part 2 of this article will take a closer look at the Triennial’s concrete outcomes, its impact on the city and its reception.

Beatrice Galilee, the chief curator of the Triennial, worked with a group of three curators (Mariana Pestana, Liam Young, José Esparza Chong Cuy)  and the co-curator Dani Admiss. She talks about her project for a flexible architecture:

MARTA JECU: The Portuguese architect Manuel Aires Mateus, commenting on a necessary trans-disciplinary vision upon architecture said that we should nevertheless be aware of not confounding architecture with other disciplines: although there are necessary contaminations and inspirations, architecture should be considered regarding its own identity, it should not dissolve into other domains. Which would be your position and the position that the triennial takes in this regard?

BEATRICE GALILEE: Architects internally consider architecture by reading geography, philosophy, spatial practice, art, while the public thinks architecture is a house, a building. There is this difference between how the discipline internally discusses it and what the public understands from this discipline. And it is exactly this gap we are trying to deal with in this edition of the Triennial. The discipline has so many possibilities and the education that the architects receive as practitioners can be applied to many other tasks, not just to designing buildings. For this triennial we are rather considering spatial practice than architecture as a discipline. The aim for us is not to try to define architecture, but to see to what architecture can practically apply.

MJ: How would you describe your encounter with the specific situation in Lisbon and how did you proceed in your work? How did you react with your curatorial focus point to the previous editions of the Triennial and their functions in this city?

BG: This edition of the triennial aims to respond to local economic and architectural conditions, so we are trying to look at the way in which architecture is being conducted as practice, the methods in which people can change the spaces that they live in and the way in which architecture can become more social. We are looking at a more discreet architectural practice. We look at how an architect can be more a performer than concerned with aesthetics. Whereas the previous editions have set the ground by focusing on Portuguese architects, this gives me a freedom to have a completely different angle and to show an architecture that is not so easily exhibited. We have a Crisis Buster Grant open for any citizen to apply with his own civic initiative and bring a solution in a specific social context. So actually instead of reflecting the city through an exhibition, we are trying to see what we can improve in the city, pushing people to make projects and not exhibiting something made by a small number of people in an abstract way. We will also have an award for young Portuguese architects, the Debut Award, a student award and a series of associated projects. So we try to invest in the city. We are also making a series of E-books for free download.

MJ: You have a gallery space for architectural practice in London – Gopher Hole –how is your work in that space in relation to your curatorial approach for an event like an architectural triennial?

BG: The difference is a methodological one. The Gopher Hole is functioning like an open platform and we are working with people that have not had exhibitions before or would not fit into a normal gallery space, as they work cross discipline. We are spontaneous, the exhibitions happen faster. With the triennial we need to be aware of what is happening now, to plan ahead but also not to be too prescriptive.

Looking to the present urban reality in Portugal and its architectural heritage, Julia Albani, one of the curators of the previous editions of the Triennial, shared her thoughts in an informal discussion.

Julia Albani: What is important is to communicate to the audience what architecture is, when the general public goes through the reality of a crisis, in which many construction processes went down and the reality of what we have just been aware of, does not exist anymore. It is important to transmit to the audience that the future scenarios in our cities are highly dependent on architects and their trans-disciplinary capacities to think with scientists, with politicians, to much more step out of the role of an architect per se, and be a player in a game where many people sit at the same table. Making a triennial is not like putting an exhibition into a museum and counting on the general public to attend. There were many architects that sent commentaries complaining about a curator that is not himself an architect – which I think is a total misunderstanding of the role of a curator for architecture. In Portugal there is a very interesting architectural history, but there is no architectural museum here. Portugal does not have a true architectural guild, but has a lot of small initiatives that try with a lot of good will and pro bono work to research architecture, but do not have a proper foundation and an institution to address themselves.

There are many things to be done, for example with the extraordinary work of the architect Pancho Guedes, who has no archive in this country and there are no efforts to take over and popularize his contribution as a Portuguese architect in Mozambique and in South Africa, to archive his drawings, sculptures and endless collections, while he is still alive. There is another architect that is simply amazing and seriously underrepresented: Fernao Simões de Carvalho, who worked with Le Corbusier at the Unité d’Habitation in Berlin and built extensively in Angola and Brasil. The triennial cannot take the role of a museum – archiving, collecting and researching – but tries to take the place of an institution, which draws attention to the fact that criticism in architecture is strongly underrepresented in Portugal and stimulates a critical distance that is needed for the reception of the triennial’s events.