Winston Chmielinski’s Neukölln studio space is impeccably organized. Cheeky remarks about the artist’s type-A tendencies lead to a confession: he just moved in yesterday. This is why the paints are organized by colour and lined up side by side on his high desk, untouched, and the space looks so clean, more like the stage set replica of what an artist’s studio should look like. He assures us that once he gets going, all the apparent order is turned on its head. 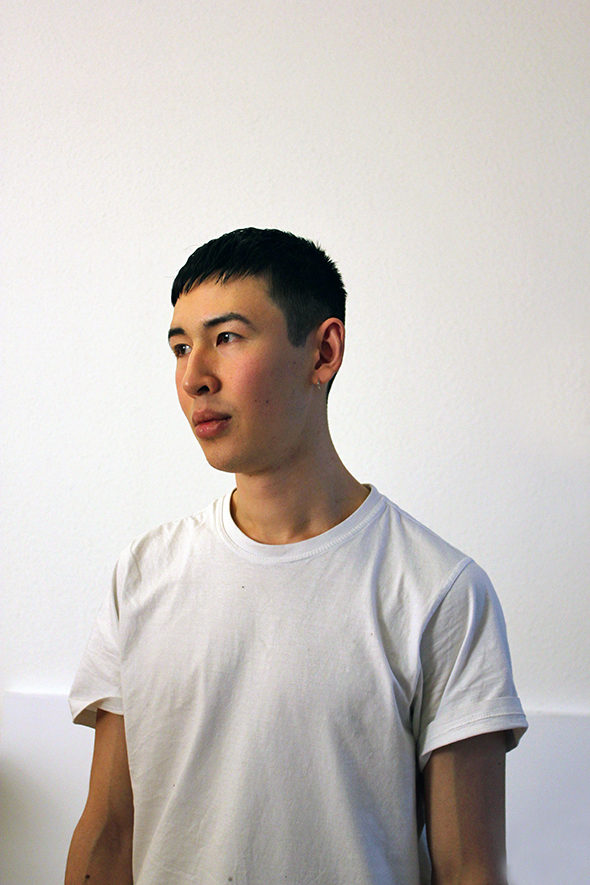 A self-professed “e-hoarder,” Chmielinski has saved over 1500 images in a Dropbox folder on his computer, organized by pattern. He sifts through the thumbnails in his image bank – made to appear homogenous by the meticulous categorization – and pulls up the pictures that catch his eye. For him, it’s a way of systematizing the chaos that prevails in the online world, reducing the mountain of images to a mere few. Then, he goes a step further: by filtering the impression of these images through his hand and paintbrush, he makes something entirely individual and rare emerge. His paintings are nothing like a copy or a rendering of these images, but more of a response. 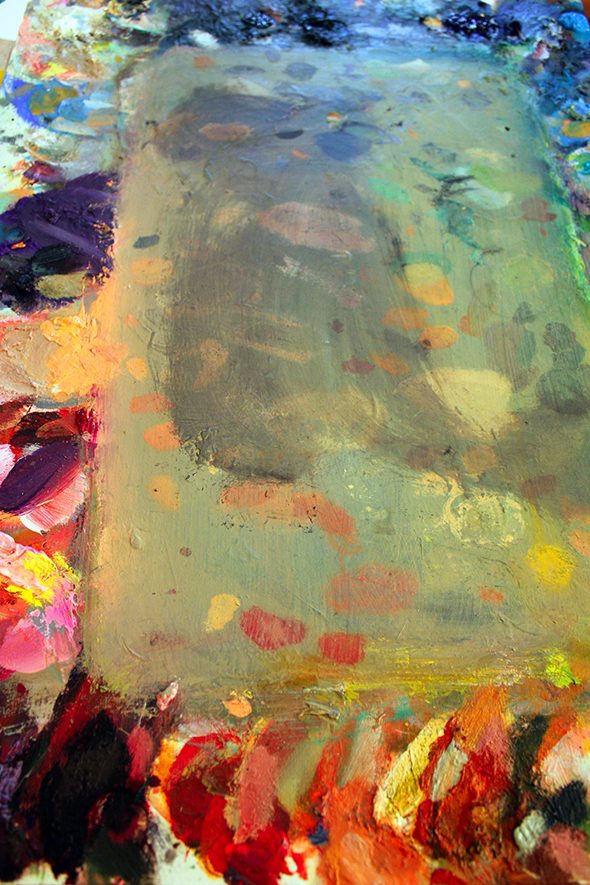 Chmielinski makes reference to the recent Facebook meme What Would I Say?, which generates individual status updates based on the user’s most common Facebook dispatches. He remarks that, fortunately, painting is one of the strongholds for inimitable style in art: while one could certainly emulate the brush strokes of a certain painter, the interference of the human hand will create mutations in every attempted copy. For example, there is no way, as yet, to isolate all the intricacies of Chmielinski’s technique into a perfectly reproducible set, a kind of ‘What Would Winston Paint?’. The very tactile, idiosyncratic nature of painting keeps it – for better or worse – in the realm of ‘high’ art.

Interestingly, most discussions of the artist’s work are permeated with references to other painters: Francis Bacon, Lucian Freud, even Monet. Perhaps it is the nature of painting, as an established and authoritative medium, that necessitates endlessly contending with its history. I ask Chmielinski about this and he agrees. For him, it is the best way to make an effective image. He admits that even photographs of his paintings are satisfying for him: it is not so much about the object itself as the effect the image produces. 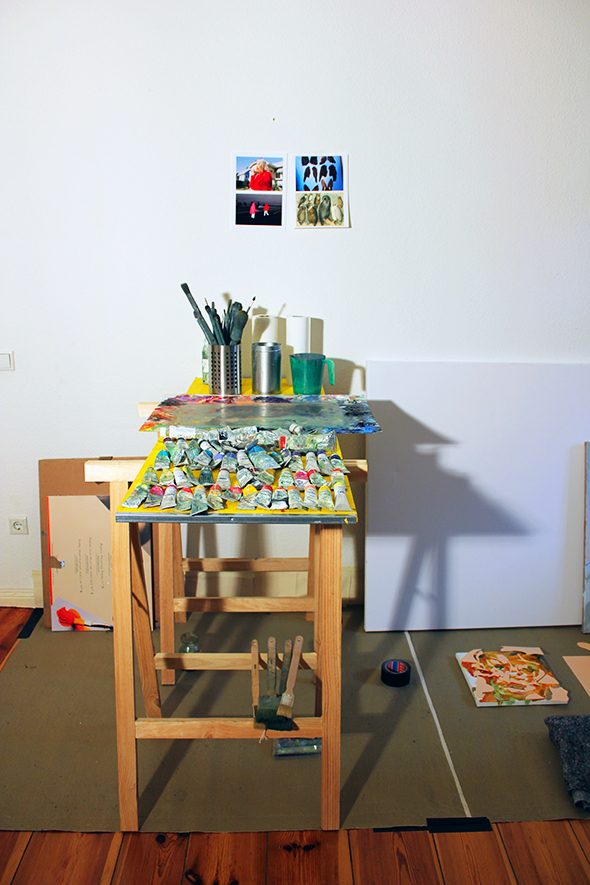 Chmielinski is young, but he’s extremely self-aware. This is obviously part of the reason for his success: while his talent seems prodigiously effortless, he is able to discuss the philosophy and methodology of his own work in an eloquent and considered way. Chmielinski jokes that before he discovered he could paint at age 16, he was “underwhelming in every capacity.” He began painting with oils, the subject matter often glossy, angsty and featuring its fair share of dramatic emo-style blood and tear droplets. But after two semesters at NYU, he learned to be more careful about materials. His subject matter matured as well. Chmielinski’s best works, he points out, are usually those that appear to be initially too ambitious. At the moment, as he’s about to embark on a month-long trip to Japan, he’s fixated on the paranoia surrounding nuclear explosions – illustrated in his recent painting “Fallout Position” (2013), that leans against a wall in the studio. 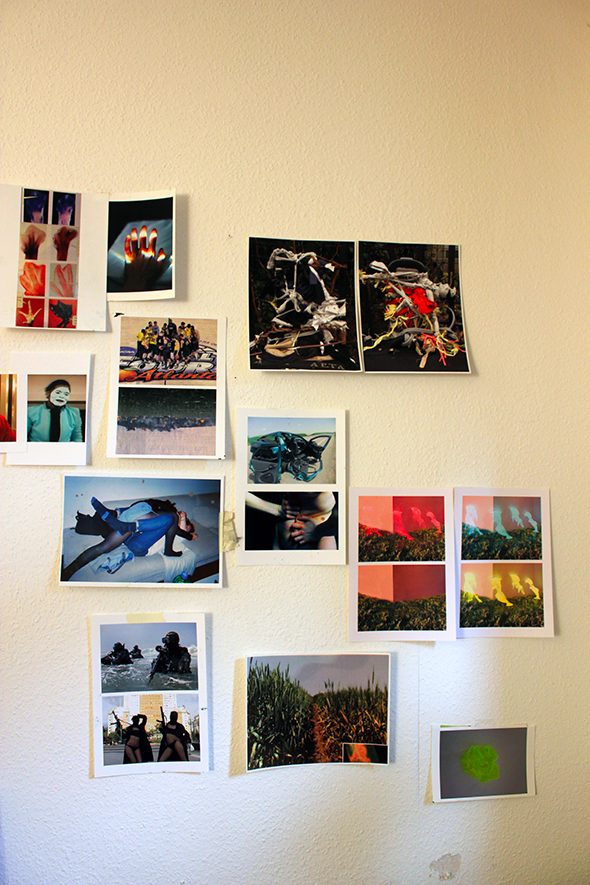 In the era of new media and digital art trends, traditional art forms like painting have the potential to be strangely subversive. At least in the youthful and web-savvy hands of Chmielinski, the paintbrush seems to wield a new power: to respond to and mediate the contemporary condition of image over-saturation. His abstract works on canvas challenge his audience to step out of a complacent role as image-consumers.

Alison Hugill completed a Masters in Art Theory at Goldsmiths College, University of London (2011). Her research focusses on Marxist-Feminist politics and aesthetic theories of community, communication and communism. Alison is an editor, writer and curator based in Berlin.