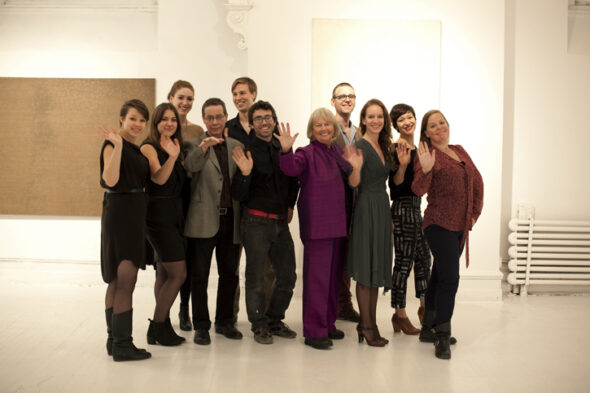 Attempting to navigate the halls of 108 Leonard Street on Saturday November 23rd would have proven a difficult feat to master. Visitors spanning generations poured enthusiastically into the Clocktower Gallery, through each resident artist’s studio, through installations of mirrors and Crystal Stokowski’s protective tribal design, over the Mary Heilmann Two Lane Blacktop hallway painting, under Tony Oursler’s pulsating Talking Lightbulbs. Early in the evening voices echoed call and response to Shelly Hirsch’s inventive experimental song to fill the clock tower which segwayed into an evening of celebration framed by an extensive exhibition of Dale Henry’s work.

Founded by Director Alanna Heiss in 1972, the Clocktower Gallery has been host to an extensive list of art world greats from Dennis Oppenheim to Marina Abramović. Alanna chose a place that would seem like a utopia for alternative art production, and definitely succeeded with this location. Sunlight spilling through the windows, interspersed walls with wainscoting, exposed wire, brick floors, spiral staircases, permanent installations – this is no sterile cube fit with track lights – every inch of the space has character. She’s also surrounded herself with a team of figures who are vital to the world of curation and the continuation of this alternative programing. Tim Goossens, Alanna’s curatorial advisor and independent curator in his own right, Joe Ahearn, curator of underground music experimental sound at Silent Barn, and Alanna herself met with Berlin Art Link to go over the ins and outs of their last show, The Artist Who Left New York, in this space, and what made Dale Henry’s show such a poignant and wistful note to end on. 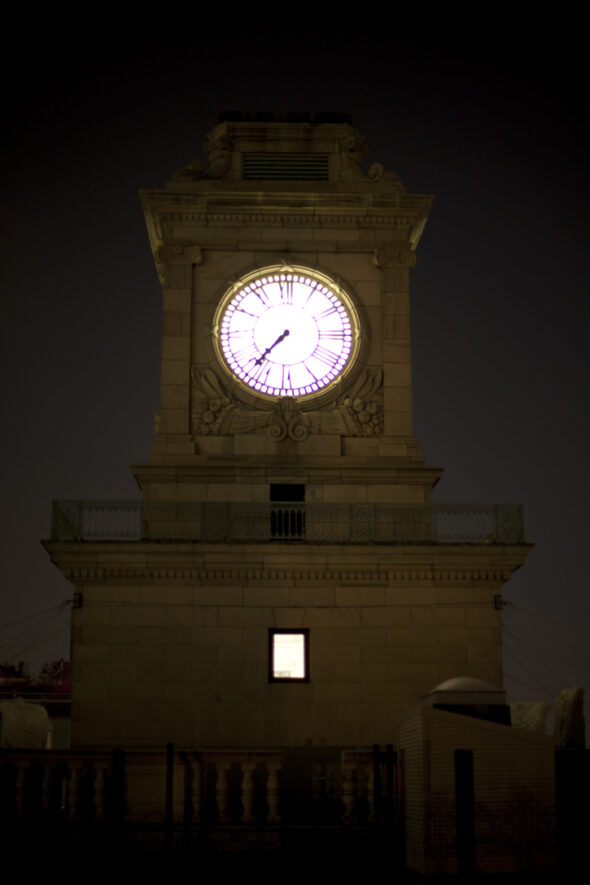 The Artist Who Left New York as a figure disenchanted and disappointed with a lack of moral center poses some great questions for why to leave a space or a city, or anywhere that an artist may call home. For the Clocktower Gallery family, shift in residence is spurred on from yet another instance of Manhattan real-estate shuffle- a procession that’s been constant since the city’s inception, yet heightened by Bloomberg’s initiative to decrease office space and make way for condominiums. Dale’s exit on the other hand was more of a direct personal display in ethics, and philosophical action. The art world seemed too much for him to come to terms with at the time of his departure. His delicate sense of minimal/maximal site specific installation, consideration of space and form was well respected in the city, but he felt that the scene had lost track. As Alanna puts it, “He wanted to move to a place with no check mate. A rural place where Dale had no pressure from others as artistic sounding boards.”

This show which resembles a retrospective, a collection of multiple bodies of work over a lifetime, hung as if by life chapter, came to Alanna under very special circumstances. It was bequeathed to her by letter which had very specific directions for care. Dale specified that she was to have his body of work, that it would be shown outside of a commercial context, and that it would not be sold. If for some reason these stipulations could not be met, then as a dramatic caveat, he added that the work should be burned, so as not to end up in the secondary market. The simplicity and poetry of these works are maintained through this legal agreement, a piece of art in itself. These works are destined not to be caught up in mercantile interests, and so can be viewed for the subtle and cleansing qualities they posses. Another wistful farewell. 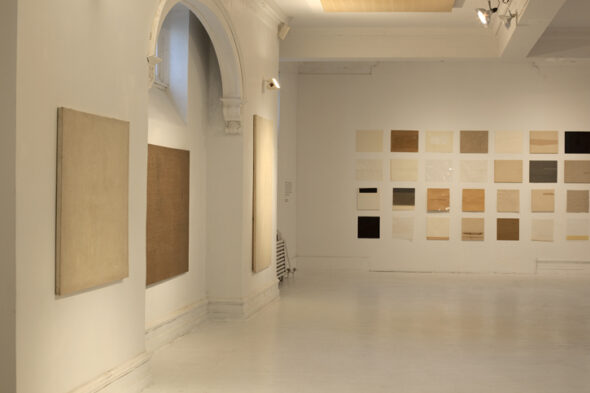 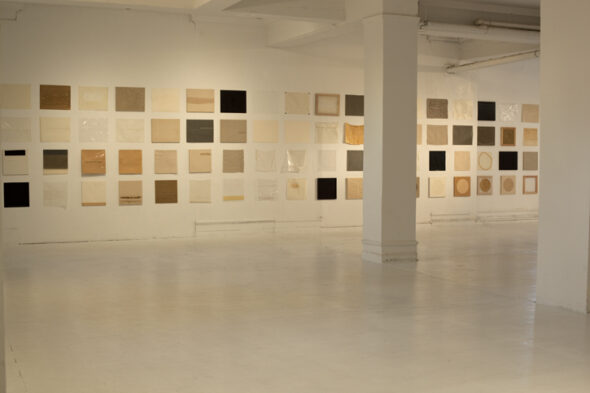 If you missed the show at Clocktower, or wish to revisit these works, The Artist Who Left New York will be on view at Pioneer Works which will also be housing their radio affiliates, Art on Air co-directed by David Weinstein.

In regards to their move to Brooklyn and Queens, as far as Alanna is concerned, “I’m dealing with the era in which I live. I’m looking to a future of enterprising people who are up to something. There’s so much to be excited about, but the first thing we have to do with our new space is have a lot of fun!”

NEUEHOUSE will be the new location of their office headquarters described by Tim as “Bauhaus meets Soho House” designed by David Rockwell. It’s a place where creative people share office space, designers with artists and other entrepreneurs all mixing together in a building with a lobby that looks like a public library. “It looks like the old office in the superman cartoon. Clark Kent belongs in that office!” A fine place to do business. And as for large scale exhibitions, Alanna has struck a deal with Knockdown Space which is the largest venue in the New York City area. Once a former glass blowing factory, it’s now cleared, and minimally restored (leaving some personality to the space, of course). Joel Shapiro will be the opening exhibit there, set for May 7th, right in sync with Frieze. After this Joe Ahearn will be opening a show of Clocktower Gallery residents as part of his curatorial endeavors (all generously supported by the Jerome Foundation). 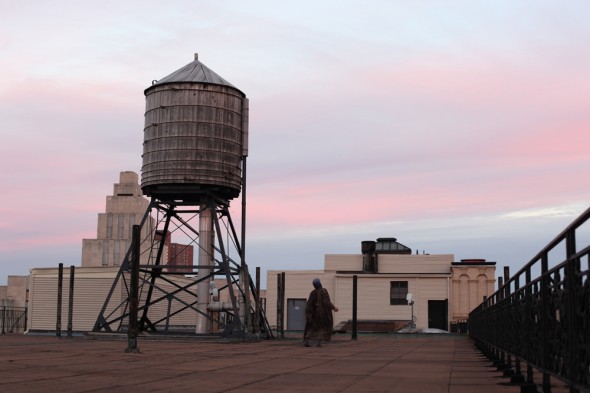 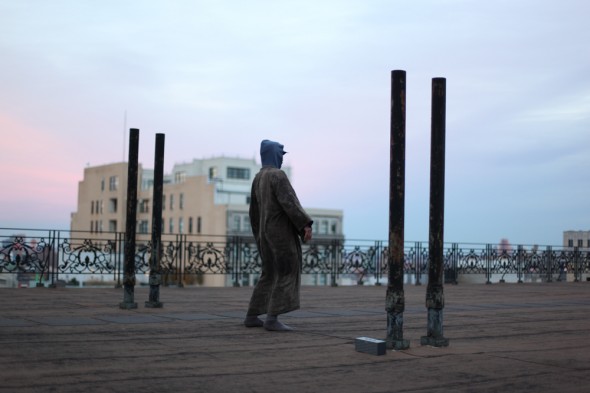 Accompanying these developments will also be a series of 4 rooftop events – be on the lookout for Isabella Rossellini’s Green Sex Performance this summer, happening in the city. An offshoot of programming in Brazil, both Alanna and Tim will be curating shows in Sao Paulo, and if this wasn’t enough for one year, the wonder team will be opening an annex in Puerto Rico to connect with performance artists there.

Occasionally leaving Manhattan just means more opportunity. The boroughs prove once again to be a burgeoning artists playground, with the space and talent necessary to produce a continuation of alternative and experimental works. It goes to show, “A good program staff can make a pigsty the place where everything’s going on, whereas a bad staff can’t make Lincoln Center into something relevant.” And it seems that the Clocktower Team is just the staff to turn this city into an installation, with or without their namesake.